The Taliban takeover in Afghanistan has encouraged Sunni extremist armed groups in Syria and pro-Iran Shiite militias in Iraq. 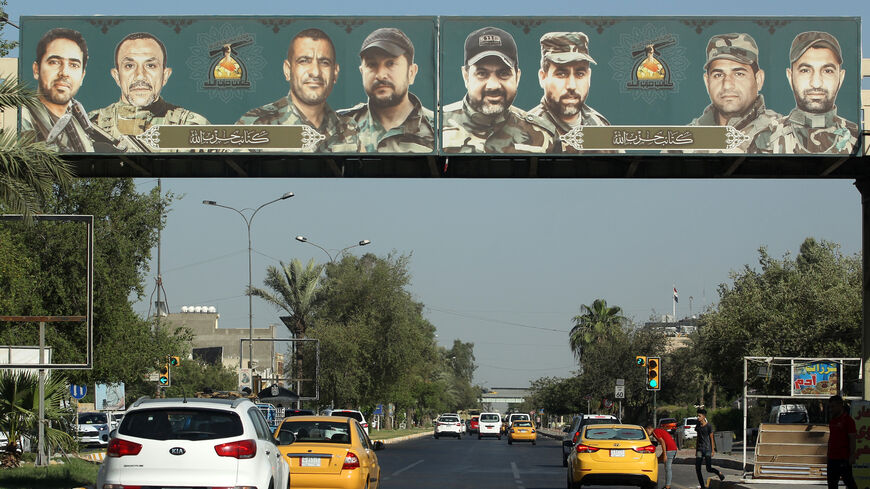 A picture taken on June 20, 2018, shows a propaganda billboard for the pro-Iran Hezbollah Brigades militia hanging on a pedestrian crossing over Palestine Street in the centre of the Iraqi capital Baghdad, depicting its members who were killed during battles with the Islamic State. - AHMAD AL-RUBAYE/AFP via Getty Images

ERBIL — As the world focuses on the end of the US military presence in Afghanistan and the Taliban’s rapid takeover of most of the country, culminating with the handover of Kabul on Aug.15, Iraqis are watching closely.

Both Iraqis and Syrians have suffered a great deal from the Islamic State as well as the destruction caused by the fight to defeat it and are wary of what this watershed moment portends for their future.

The Taliban takeover is, at a minimum, an inspiration for radical and terrorist groups.  The Taliban have massive amounts of equipment, vehicles and aircraft left behind by the United States. They are more highly trained and appear to have more support from neighboring countries than when they ruled the country between 1996 and 2001. They are also still working alongside a number of designated terrorist groups with foreign fighters, while they have instead engaged in battles in the eastern part of the country with Islamic State Khorasan Province (ISKP), the local branch of the Islamic State (IS) that includes a number of former Taliban fighters that have defected in recent years to its ranks.

Former Falcon Intelligence Cell chief Abu Ali al-Basri told Al-Monitor in a 2019 interview that Qahtani, who is believed to be in Syria’s northwestern Idlib province, "has the potential to set up a new organization” and that he "takes advantage of disaccord between religious figures and wealthy men in the Gulf.”

The intelligence chief then said Qahtani would be killed if he ever dared return to his native Iraq.

Catching many by surprise, Iran instead seems to be focusing more on preventing criticism of the Taliban than on extracting conditions from the group to protect the country’s Shiite minority.

The assumption among so many who had ignored Afghanistan for several years was that the Shiite Hazara minority group would be the most at risk from a Taliban takeover and that Iran might send in some of the foreign fighters it has trained and armed, such as the Fatemiyoun Brigade, to fight the Taliban. Close observers easily predicted, however, that such a move was highly unlikely.

Iran’s longstanding involvement in its western neighbor has received much more attention than its attention on its eastern one.

In Iraq, while members of various armed Iran-linked Shiite groups initially spoke about the dangers of the Taliban, associating it with the Sunni extremists of al-Qaeda, they shortly afterward fell silent or praised it.

This journalist was sent a message from Abbas al-Zaidi, from the political office of the PMU faction Kataib Sayyid al-Shuhada, on July 27 — while reporting from the city of Kandahar as fighting raged around and in it — in which he railed against what he implied was a plot by the United States and Israel to “destabilize the Islamic Republic of Iran” and “revive the sectarian project through the Taliban movement and the Caliphate state,” apparently referring to IS.

In the message, he stated that the US withdrawal and the collapse of the Afghan forces came after “a prior agreement between the Taliban and America for the purpose of achieving American goals at a low cost.” This was done, he said, “under Qatari sponsorship through negotiations that continued for several months that preceded the American withdrawal." He claimed, “In this way America achieves a number of its political and economic goals and saves itself from” a loss of global power.

The negotiations he was referring to were talks in the Qatari capital, Doha, during which the former US administration under President Donald Trump granted several concessions to the Taliban in a February 2020 agreement in exchange for a relatively bloodless withdrawal of US troops.

Subsequent talks between Afghan representatives and the Taliban in the intervening period were roundly criticized, including by two participants who spoke to this journalist in Kabul in July, as being useless due to the Taliban “having no interest whatsoever in peace.”

One of the concessions of the US-Taliban deal was that 5,000 Taliban prisoners be released by the Afghan government, which did not want to comply but was pressured into doing so. Many Afghan security forces told this journalist during a monthlong reporting trip to the country between July and August that this mass release of prisoners had proved detrimental to the fight against the extremist group.

A request for comment on the Taliban takeover and what it means for the Iran-led “muqawama,” or resistance movement, sent to Zaidi on Aug. 30 was seen but not responded to.

Kataib Hezbollah spokesperson Mohamed Mohi instead told Al-Monitor in a Aug. 30 message that Taliban control of Afghanistan is a “great defeat for America and its influence in the Central Asian region.”

Both Kataib Sayyid al-Shuhada and Kataib Hezbollah are Iran-linked armed groups that operate independently but have brigades incorporated into official Iraqi government-salaried forces.

Mohi added, “The shameful withdrawal of America and the rapid collapse of the Afghan government and its security forces proved that our conviction is correct that America does not build security forces, does not support them or strengthen them and does not help countries to develop.”

“As a result, acceptance of the Taliban rule is the choice of the Afghan people, and we respect their choice, provided that it does not pose a threat to its neighbors and does not adopt exclusionary Takfiri ideology,” he said. “America is a country that only cares about its own interests at the expense of the interests of the people, and it works to impose its will and its agendas. We do not trust America, and we believe that its presence in Iraq is a threat to our security and existence. Therefore, we are working to get it out by all means.”

Close observers have noted that Iran has been supporting the Taliban in various forms for many years, as have some Afghan Shiite leaders.

The Afghan Shiite Hazara leader and former Vice President Mohamed Mohaqiq in recent years attended a Moscow conference for talks with the Taliban that the Ashraf Ghani government was opposed to. Mohaqiq has also for years praised Iranian Revolutionary Guard Corps commander Qasem Soleimani, killed in early 2020 by a US drone strike at the Baghdad airport, in religious forums and meetings in Iran.

Iraq and Afghanistan have long been intertwined in terms of US involvement, calls to end the US “occupation” of the countries and terrorist groups operating in them.

Several leaders of al-Qaeda in Iraq trained in Afghanistan prior to coming to Iraq and ideological links and ratlines continue to exist between the two.

How significant of a risk the Taliban or armed groups linked to them are outside of their own borders is a matter of debate.

What is certain, however, is that both the United States and Iran seem to have come to some sort of agreement with the group. And Iran, its neighbor and longtime supporter, is likely to continue to play a major role in what happens in the country in the years to come.