Gaza's astronomy enthusiasts lament that the siege on the Gaza Strip prevents them from establishing quality laboratories and traveling abroad for educational events. 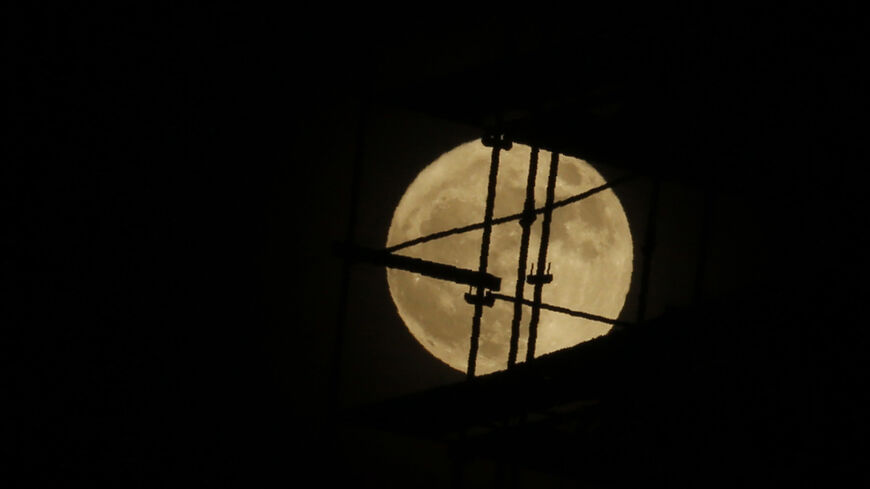 A picture taken on Nov. 14, 2016, shows the moon on the eve of the "supermoon" spectacle in Gaza City. - MOHAMMED ABED/AFP via Getty Images

“What gets to me is that I was unable to take part in the 2021 astronomy camp in Hebron as the Israeli occupation refused to grant us permits,” Jumana Koueider, an amateur astronomer from the Gaza Strip, lamented in her statement to Al-Monitor.

Koueider explained that the camp, which was held on Aug. 5, included an observational astronomy training course held at the observatory of Birzeit University and at the planetarium of the Korea Palestine Center in Hebron, as the month of August offers the most beautiful astronomical events in the Palestinian sky of Palestine: a major meteor shower.

She added that the camp includes classes about the sky of Palestine and its star clusters and constellations. “We were going to observe Saturn and Jupiter with telescopes,” she said.

“At dawn, we were also going to observe the moon. My team and I were planning to watch the International Space Station crossing in the Palestinian sky, a wonderful scene that can be seen with the naked eye,” Koueider added. “We were going to photograph an arm of the Milky Way.”

Koueider leads a team of 30 volunteers who often meet at Al-Aqsa University’s Center of Astronomy and Space Sciences Research. They teach children from across Gaza about astronomy and related sciences at her home and other sites such as the Al-Aqsa research center in cooperation with local institutions such as UNRWA schools, public schools and the Qattan Foundation.

Since 2013, astronomy camps have been held yearly for astronomers and astronomy enthusiasts across the West Bank, but not in the Gaza Strip. Each year, Koueider registers to take part in one of them, just to be rejected by the Israeli authorities again and again.

Koueider, a self-described bookworm, took an interest in astronomy after she read a book on its history since the era of her Canaanite ancestors and ancient civilizations. She had found the book on the shelves of her grandfather’s library in the attic of his humble home.

Al-Monitor stepped into Koueider’s makeshift laboratory that she set up at her home in Khan Yunis in the southern Gaza Strip. There she keeps lenses and other equipment along with hand-made tools and models of celestial bodies.

During one of her demonstrations, she put lemon juice on a sunflower leaf and the class watched as it turned red. The children were astonished as she discussed what such simple chemistry experiments can teach about the stars.

“We are now taking part in the first astronomy camp for children in the Gaza Strip called ‘Astronomical Adventures,’ in cooperation with the Culture and Free Thought Association. At the end of the camp, there will be an exhibition for the children to share and demonstrate what they've learned,” Koueider added.

Koueider hopes that more people in Gaza will take interest in astronomy and that the sparse existing activities and programs will be developed.

Mirna Abu Mosbah, one of Koueider’s volunteers who holds a physics degree from Al-Azhar University, told Al-Monitor, “The dream seemed quite elusive at first. We were bullied and mocked because we live in a besieged city where people asked us how we were planning to build a space rocket and whether or not we were going to NASA. But we believe in what we are doing. We are very happy with what we are achieving and will achieve. Despite the lack of opportunities and other problems, we are still learning and innovating.”

Lorraine Qandil, another member of the team and an astrochemist at Al-Aqsa University, told Al-Monitor that the team made a small telescope from reused parts. She added that the lack of material resources is far from the only challenge, saying, “Most of us are girls, and we live in a conservative society where going out after midnight to see the stars and the moon is frowned upon.”

Sobh Wajih al-Qiq, a doctoral student at the Sorbonne University and a researcher with the Plasma Physics Laboratory in Paris, worked as a researcher at the Center of Astronomy and Space Sciences Research at Al-Aqsa University and headed the astronomy team before he travelled to France and Koueider took over.

He explained that he studied and received many scholarships and research opportunities, “but I was not able to get out of the Gaza prison until two years ago, when I traveled to Paris.”

Qiq added, “I worked at some Palestinian research institutions and universities, but there is unfortunately not enough interest in science to make a difference. Universities tend not to establish space research centers, and if any of them are inclined toward establishing such centers, they usually fail to prioritize them.”

Qiq stressed the need to provide Palestinian scientists opportunities abroad and support them in their studies and for more attention to be paid to the work of the Center of Astronomy and Space Sciences Research.

Ziyad al-Sahar, a physics professor at Al-Aqsa University, told Al-Monitor, “I was interested in astronomy since childhood and I used to borrow astronomy books from the Center for Culture and Light [in Remal] in the 1970s, as resources were sparse and there are no astronomy specialists in Palestine.”

He added, “There is an astronomy center at Al-Aqsa University, astronomy societies, a club for amateur astronomers and astronomical projects in the Gaza Strip, but all of them need support and development.”

“Only two telescopes have entered Gaza through the French consulate, and it is difficult to provide more advanced telescopes due to the siege,” Sahar said, adding that the university is currently working to introduce an astronomy course.

Tarawa added, “The Palestinian team thankfully won first place in the world in the International Space Settlements Design Contest organized by NASA.” The annual August competition for high school students is supported by many space, engineering and education organizations.