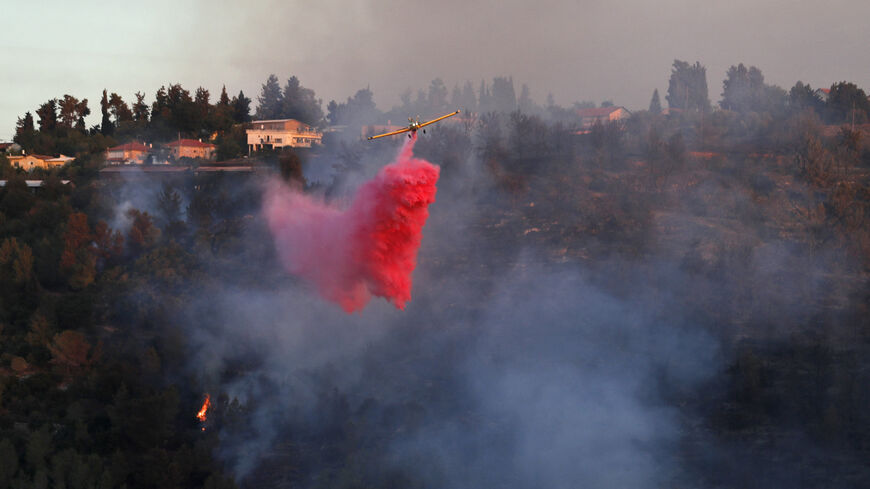 A firefighting plane works on extinguishing a forest fire at the Jerusalem mountains near Shoresh, on Aug. 16, 2021. - AHMAD GHARABLI/AFP via Getty Images

Israeli Prime Minister Naftali Bennett said Monday night that firefighting efforts near Jerusalem are continuing as wildfires had not been fully extinguished.

“At this time, it seems that the efforts to bring the fire under control are moving in a positive direction but it must be said that it is not over until it is over,” said Bennett in a statement.

Wildfires broke out in forested areas and towns west of Jerusalem on Sunday. Some houses burned and thousands of residents had to evacuate, according to local media. Videos tweeted by Israel’s public broadcaster Kan showed massive flames engulfing trees and black smoke clouds above the area.

Bennett said the wind could cause the fire to spread. The flames were moving eastward Monday night, posing a threat to communities in west Jerusalem. Firefighting planes will resume early Tuesday morning, but other efforts will continue through the night, Bennett said.

Forest fires have been occurring throughout the Middle East this summer, including in Turkey, Syria and Lebanon. There have also been fires in European states on the Mediterranean Sea, such as Greece.

Israel had sent firefighting planes to Greece last week. Israel in turn asked Greece, as well as Cyprus and other European countries, for help Monday with the blazes near Jerusalem, per Israeli media.

Bennett did not say what caused the fires.