US adds Turkey to list of countries using child soldiers

A US State Department report called out Turkey for providing support to armed groups in Syria that use children in combat. 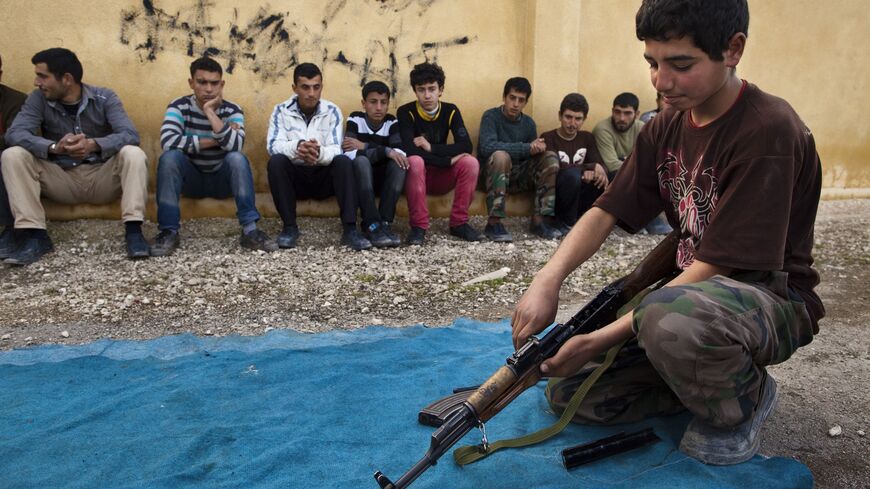 A Syrian youth holds an AK-47 assault rifle as he takes part in a military training on Jan. 23, 2013, at a former school turned into a "military academy" in Tlaleen in northern Syria's Aleppo province. Perhaps bored at home and eager to join their older brothers and fathers on the front line against President Bashar al-Assad's army, Syrian teenagers joined the rebel cause, oblivious to international laws prohibiting child combatants. - JM LOPEZ/AFP via Getty Images

The US State Department has added Turkey to a list of countries implicated in the unlawful recruitment or use of child soldiers, the first time the label has been applied to a NATO ally.

Fourteen other countries, including Yemen, Iran and Iraq, were identified under the Child Soldiers Prevention Act as having government forces or government-supported armed groups that recruit or use children.

The report notes that countries designated by the act are subject to restrictions on certain security assistance and commercial licensing of military equipment, but that US presidents can waive those restrictions. State Department spokesperson Ned Price on Thursday declined to say if Turkey will face any limitation on military assistance following the report.

Turkey has fought Kurdish forces in Syria with the backing of the Syrian National Army, an umbrella group of both moderate and hard-line rebel factions. Some of the proxy fighters have been accused of serious rights violations, including killings, torture and kidnappings, in parts of northeast Syria seized during the Turkish border operations.

A senior State Department official told reporters Thursday that Ankara has provided “tangible support” to the Syrian National Army’s Sultan Murad faction, including transit through Turkish territory during the reporting period of April 2020 through March 2021.

“This is the first time a NATO member has been listed in the child soldier prevention act list," the official said. "As a respected regional leader and member of NATO, Turkey has the opportunity to address this issue, the recruitment and use of child soldiers in Syria and Libya.”

Al-Monitor has previously reported on how Turkey-backed factions, including the Sultan Murad division, recruited Syrian children to fight on behalf of the Government of National Accord in Libya. The United Nations says both Turkey and Russia, which have supported opposite sides in both the Syrian and Libyan civil wars, deployed Syrians to fight in the North African country.

The State Department’s report Thursday also lists Syria as a “Tier 3” country, the category for governments doing the least to combat human trafficking. The report accused Damascus of continuing to “arrest, detain, and severely abuse trafficking victims, including child soldiers, and punished them for unlawful acts traffickers compelled them to commit.”

The Islamic State (IS), Hayat Tahrir al-Sham in northwest Syria and other terrorist groups “forced, coerced, or fraudulently recruited foreigners,” including Central Asian and Western women, to join them. The report said many of the women held alongside the families of IS fighters at al-Hol and other displacement camps may be unidentified trafficking victims.

The report noted that the SDF has taken steps to end the use of child soldiers. Last year, the UN reported the SDF had demobilized 86 children, including 56 girls, and returned them to their families.