Palestinian leaders are hoping for a political breakthrough with the United States to help restore their domestic credibility. 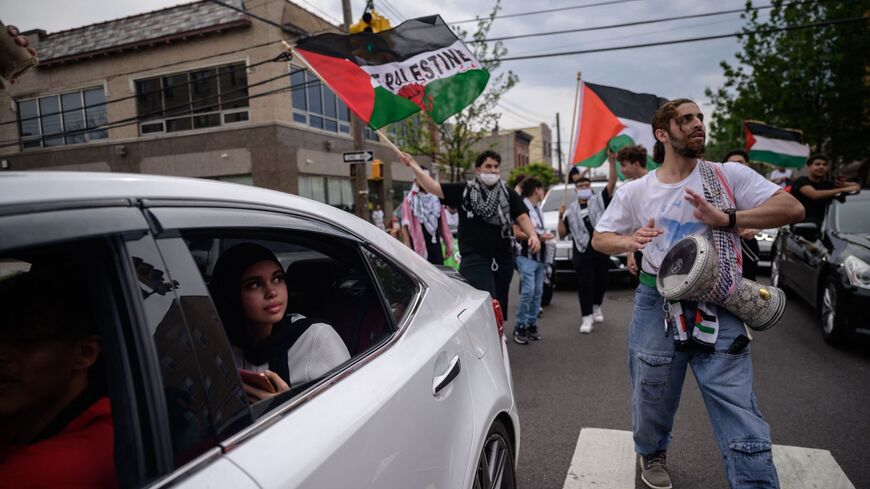 Demonstrators wave flags as they attend a rally for Palestine in the Queens borough of New York on May 22, 2021. - ED JONES/AFP via Getty Images

Shortly before his departure to the United States, Jordan’s King Abdullah dispatched two helicopters to Ramallah June 30 to fetch Palestinian President Mahmoud Abbas and his entourage. It is not clear who called for the summit but there is no doubt that the topic of discussion was the upcoming July 19 meeting between King Abdullah and US President Joe Biden. Abbas brought with him most of his top aides including political and security officials.

For Abbas, whose popularity has reached an all-time low, the peace process appears to be a handy distraction from the internal bickering that is taking place in Palestine.

While Palestinian-American dialogue has resumed since the inauguration of President Joe Biden, many obstacles remain. The Palestinian leadership is hoping that King Abdullah, the first Arab leader to meet Biden at the White House, will be able to help restore relations to what they were during the Obama administration, when Palestine had a mission in Washington, DC, and the US Consulate in Jerusalem worked directly with the Palestinians without having to go through the US Embassy in Tel Aviv. Part of the problem was inherited from previous administrations and largely pro-Israel Congresses. The latter passed legislation requiring the closure of the Palestinian mission if a number of conditions were not met, and the White House must approve a waiver every six months for the mission to remain open. Palestinians have asked that these restrictions be permanently removed so that the Palestinian mission doesn’t continue to be vulnerable to political moods.

Palestine also wants proper implementation of UN Security Council Resolution 2334, which was passed in the last days of the Obama/Biden administration. That resolution considers all settlements built in areas occupied in 1967 including east Jerusalem illegitimate and called on Israel to stop settlement expansion. Yet Israeli settlement activities in the Palestinian neighborhoods of Sheikh Jarrah and Silwan have continued, and no change of policy by the new Israeli government seems likely. In addition to the illegal settlement efforts in Jerusalem, the new government appears to have ignored an Israeli Supreme Court ruling that settlements on private Palestinian lands be dismantled.

Right now, the Palestinians' main goal is to find a way to return to the negotiating table. To do so they need a freeze on Israeli settlement activities, but Israel now has a right-wing prime minister who once headed the umbrella council for the settlements.

Washington is treading carefully between its own principles of human rights and democracy and realities on the ground. One decision that must be made is how to engage with Hamas despite the three impossible conditions set by the Middle East Quartet back in 2006. An effective Palestinian national unity government for both the West Bank and Gaza that can help resolve the internal Palestinian conflict will need to involve top-level Hamas officials, but there is no love lost between the Islamic movement and most Arab countries, including nearby Jordan and Egypt as well as Ramallah.

Palestinian leaders are hoping to escape internal criticism by touting an international success but many Palestinians want to see progress on the domestic front as much as a negotiated end to the Israeli occupation.