The method in which the protests against the killing of the critic of the Palestinian leadership Nizar Bayat were violently put down, with the use of security officials dressed in civilian clothes, has exposed a deep rift in Palestinian society. 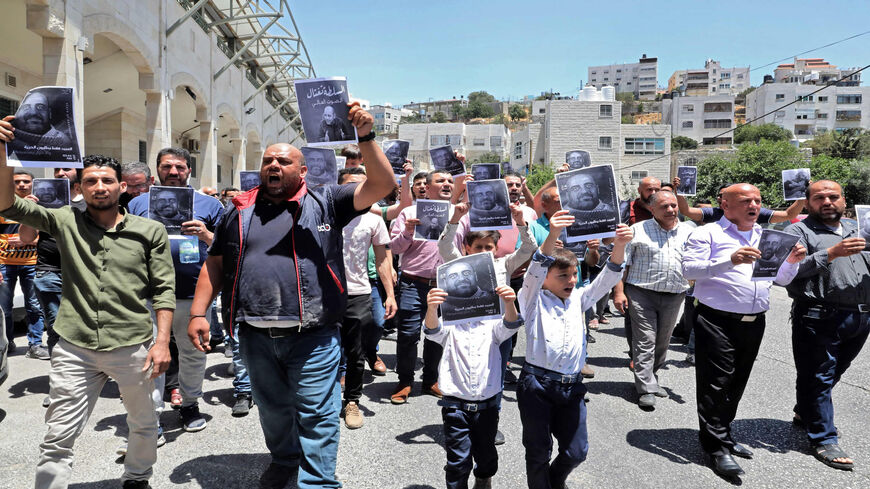 Demonstrators hold up images of Palestinian activist Nizar Banat, who died in late June during a violent arrest by Palestinian Authority security forces, as they march during a protest in the city of Hebron, West Bank, July 2, 2021. - Mosab Shawer/AFP via Getty Images

The June 28 Facebook post by Palestinian teen Ahed Tamimi who slapped an Israeli soldier was powerful. “The Tamimi family doesn’t accept injustice. My mother Nariman Tamimi informed my brother who participated in the attempts to break up a demonstration by citizens in the streets not to come home. He can either resign [from his security service position] or apologize. Otherwise, my mother will announce she will wash the family hands from having any relations with him.”

Social media shows many of these confrontations between patriotic Palestinian parents confronting their sons who are working for the Palestinian security service and who were filmed violently putting down fellow Palestinian demonstrators.

What made the protest scenes more troubling was that the attackers were dressed in civilian clothes and were trying to support the regular uniformed police, who had shields and at times were using riot gear to control the demonstrators.

The attackers were not only violent but also appear to have focused on female demonstrators, journalists and anyone with a camera or a cellphone. In many cases, cellphones were taken away by the plainclothes security forces. It appeared later that some of the personal content of the phones of female protesters was leaked to the press, according to Hanan Ashrawi.

Rita Ammar, a student at Bir Zeit University, wrote a detailed account on her Facebook page of what happened to her. “I remember him well that one that kicked me while I was on the ground. I will get his photo and find out his name and I will tell him to see my face well because our blood is not cheap nor is our body and our health.” Ammar continued that she knows many Fatah supporters at the university and called on them to resign from the movement because of these actions.

Ashrawi, former member of the PLO Executive Committee who recently resigned because she wanted to give the youth a chance to take a leadership role, participated in a press conference June 30 with a number of female Palestinian journalists condemning what happened. Ashrawi wrote on her Twitter account, “Incitement, intimidation & invective, Palestinian women journalists suffer mental & physical attacks at the hands of the security forces that are supposed to protect them. Sad. Shameful. #handsoff.”

A detailed list of the attackers that included their name and workplace (all work in the security forces) was circulated on various social media accounts, mostly by Palestinians living abroad but reposted by Palestinians locally. Anti-corruption Palestinian activist Fadi Elsalameen, who was threatened by Abbas’ security forces and has left Hebron for the United States, has been exposing the attackers on social media. He shared photos of attackers revealing their name, job title, payroll number and workplace. A photo of one of the attackers is listed as being on the payroll of the Presidential Guard.

Nabil Amr, a former senior Fatah official who is still supporting Abbas, was unable to hide his anger at what was happening, saying that Palestinians are not able to exercise any freedoms because of the occupation except the freedom of expression. Taking that away from them by the Palestinian leadership is unacceptable, he said in a powerful video post on his Facebook page.

The internal strife was not limited to individuals but included parties and institutions, too. The Palestinian People’s Party decided to withdraw its minister from the Mohammad Shtayyeh government. The internal problems also cost a number of senior officials their positions. The head of the National Library was among those who lost his job due to his social media posts, which were rather mild in light of the gravity of the situation. President Mahmoud Abbas fired head of the National Library Ehab Bessaiso without any due process.

The international actions of the Palestinian security forces — both uniformed and plainclothes — was strong. UN Human Rights Commissioner Michelle Bachelet said that the Palestinian government is obliged “to ensure freedom of opinion, expression and peaceful assembly,” and that the Palestinian security forces must “act to provide safety and security” for the exercise of human rights, including peaceful assembly. “Any unnecessary or disproportionate use of force must be promptly, transparently and independently investigated,” she continued.

Palestinian human rights organization Al-Haq condemned the attacks carried out by the PA security forces against the participants of the peaceful assembly. It also condemns allowing members of the security forces in civilian attire to hold a rally in support of the executive authority in the city center of Ramallah. Al-Haq notes that this exemplifies “discrimination between citizens regarding their enjoyment of their constitutional rights, which the Palestinian Basic Law considers being constitutional crimes not subject to a statute of limitations, and constitutes a grave violation of the state of Palestine’s obligations arising from its accession to international human rights conventions.”

While Palestinian and international human rights organizations investigated and condemned what happened and have made official requests for an investigation of the violation of Palestinians’ rights to freedom of expression, it seems that the most dangerous result of what happened has been the struggle within families and the community endangering the very fabric of Palestinian society.