The drama over the citizenship law gave the Arab Raam Party its first bitter taste of life in the coalition. 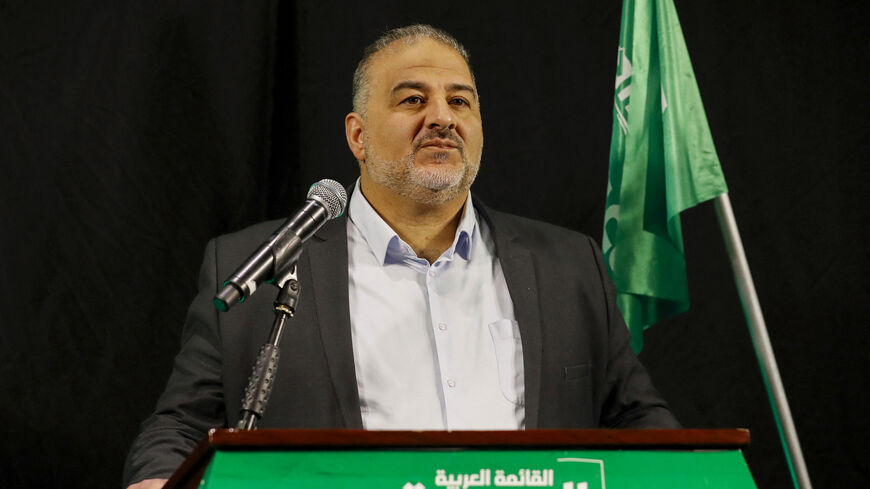 Mansour Abbas, head of Israel's Raam party, speaks during a press conference in the northern city of Nazareth on April 1, 2021. - AHMAD GHARABLI/AFP via Getty Images

The drama reached a climax in the Knesset this week, with the defeat of the government’s attempt to extend an amendment to the law governing citizenship and entry into Israel. The vote failed to obtain a majority when Knesset member Amichai Chikli of Prime Minister Naftali Bennett’s own Yamina party voted against it and two members of the Arab Raam, Mazen Ghnaim and Said al-Harumi, abstained. In the final tally, 59 members voted for the law, but the same number voted against it, so it did not pass. It was the coalition’s first defeat.

The amendment, traditionally renewed on a yearly basis, prevents entry into Israel and resident status for Palestinians from the West Bank and Gaza who are married to Israelis in the name of family reunification. Many Israelis agree that the reasoning behind this legislation is political and with demographic aims, even if it is framed as a security matter. The legislation is designed to prevent thousands of Palestinians from seeking residency in Israel, even though a few thousand Arab individuals at most would surely not undermine the Jewish majority.

Several weeks have passed since Raam made history by becoming the first Arab party to join a governing coalition, a sharp break from long tradition. The current government could not have been formed without its support. This week’s late-night drama leading up to the vote underscored the conflicts and complexities inherent to including such a party in the coalition. Raam found itself being forced to vote for a law that targets its own Arab constituents.

Raam’s vote highlights the dilemma it faces in participating fully in the political game. Anyone who thought that joining the coalition would be a pleasant experience leading to such enviable perks as jobs in government, committee memberships and budgets for Israel's Arab society is suddenly facing the steep price for them.

Raam Knesset faction chair Ibrahim Hijazi described the tense situation for Al-Monitor: “Let’s start with that famous adage, ‘What you see from here, you can’t see from there.” People on the outside tend to think that everything runs smoothly on the inside. This is not at all accurate. Once you are on the inside, you join the circle of decision-makers and share responsibility for whatever happens. The moment you join the coalition, you partner with people who promoted racist policies against you — policies which you fought against from the outside until now. Suddenly, you either reach some kind of modus vivendi with them, or nothing will work. We want to advance solutions that get to the root of the problems we face, but at the same time, we are willing to let this happen incrementally. That is because we have a long-term perspective on the issues. We do not subscribe to an all-or-nothing approach.”

Asked how he believes Arab society will react to Raam’s actions in this case, Hijazi said, “We conducted polls and found that most of our electorate wants to give this new approach a chance. People are suffering. They are willing to be partners in the decision-making process if it might change the existing situation and resolve problems like violence, housing, employment, the economic situation, etc. On the other hand, that does not mean that they have no red lines.”

How will Raam’s leadership manage to survive the humiliating traps that the opposition is setting for the coalition, especially concerning legislation detrimental to Arab society?

While many members of Arab-Israeli society condemned Raam’s decision not to oppose the law, some did express support, reasoning that the party’s ultimate objective is to tackle the serious problems facing the Arab community in Israel.

Saleh Samara, a technology specialist from the village of Tira, told Al-Monitor, “Raam did, in fact, make history, not because it was the first Arab party to join the coalition, but because it gave up more than any other party and got so little in return. It gave up on its principles, when the government approved the provocative flag march in Jerusalem; it gave up on its principles with the [West Bank settlement] Evyatar compromise; it surrendered to the right over who would sit on the committee to appoint judges; it conceded again when the interior committee that it heads was stripped of some of its authority and it conceded in the vote on the citizenship law. It keeps kowtowing in the name of coalition discipline, but it has no real achievements to its credit.”

Ali Zahalqa, a retiree from the school system of Kafr Qara, disagrees. He told Al-Monitor, “As of now, there is no doubt that what Raam did [by joining the coalition] was a breakthrough when it comes to the integration of Arab society into the state of Israel. On the other hand, it is inevitable that they will sometimes be forced to face serious dilemmas, as happened this week with the vote on the citizenship law. Nevertheless, it is important to remember that this is a kind of toll they must pay for the survival of this government if they want to keep Netanyahu from returning to power.”

Raam's ultimate goal seems to be integration into Israeli society. This objective requires more than just membership in the coalition. It inevitably involves winning the support of the Arab public.

What do Jewish Israelis think about Raam’s participation in the coalition? There seems to be some support for it. Adi Balderman, a doctoral candidate in gender studies who lectures on Israeli politics, told Al-Monitor, “Raam already made history by joining the coalition. It was a move that made it possible for Arab parties to be counted among the country’s decision-makers. It may even contribute to the kind of change that must happen, when looking at Arab society in Israel. At the same time, it is rather ironic that the party taking this big step forward is allegedly the least moderate, least liberal of the Arab parties.”