Militia attacks on US bases in Iraq have risen and the government is beginning to treat them as terror groups. 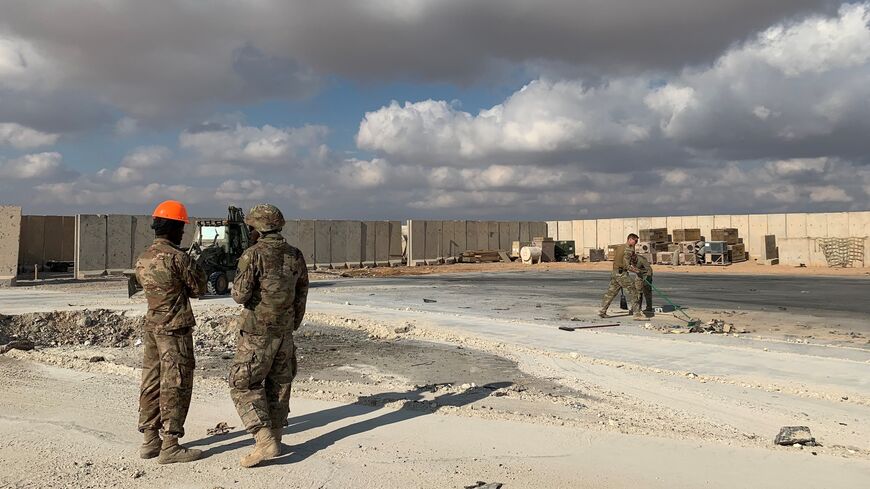 A picture taken on Jan. 13, 2020, during a press tour organized by the US-led coalition fighting the remnants of the Islamic State group, shows US soldiers clearing rubble at Ain al-Asad airbase in the western Iraqi province of Anbar. - AYMAN HENNA/AFP via Getty Images

For the third day in a row, US bases are being targeted by militias in Iraq. The latest attack is significant due to the number of rockets and the fact that it caused injuries, unlike earlier incidents.

The attack took place around noon local time on July 7, when 14 rockets hit the Ain al-Asad base and led to at least two injuries, according to coalition spokesperson Col. Wayne Marotto.

The attack was launched from a residential area in Al-Baghdadi city in Anbar governorate. A rocket launcher shot 14 from a small truck carrying dozens of rockets. The rest exploded, damaging nearby homes and a mosque, according to a statement by the Security Media Cell.

The attack was immediately claimed by a newly formed militia that is believed to be a new front for one of the main militias.

“Our mujahideen were able to target the Ain al-Asad base occupied by the Americans in Anbar province with 30 Grad missiles at exactly 12:33. The targets were hit with high accuracy and we renew our call for the brutal occupation … to leave our land defeated and broken,” read the statement signed by Al-Muhandis Revenge Brigade.

Reacting to the series of attacks, Prime Minister Mustafa al-Kadhimi's military spokesperson, Yahya Rasool, strongly condemned the attack in a statement, accusing “the enemies of Iraq" of "targeting the country’s security, sovereignty and the safety of our citizens through a new terrorist attack.”

Significantly, his words marked the first time that the Iraqi government has used the terms “enemy” and “terrorism” for the militias. The move was widely welcomed by foreign officials, including ambassadors of Western countries.

The statement also slammed attacks against “diplomatic missions,” affirming the Iraqi government's “refusal" to allow "Iraqi lands and the security of its citizens" to become "an arena for proxy war.”

On the other side, the launching of missiles from a civilian area — next to a mosque, no less — is another significant development that indicates the militias are following other terrorist groups like al-Qaeda and Islamic State, in exploiting religious sites for creating propaganda against the United States and other Western allies.

Many Islamist terrorist groups have religious sites as bases for their attacks so any damage can be used in propaganda against the West, saying that religion itself is being targeted.