In order to find solutions to the chaos in Baghdad due to overpopulation, the Iraqi government plans to launch a new city next to the capital. 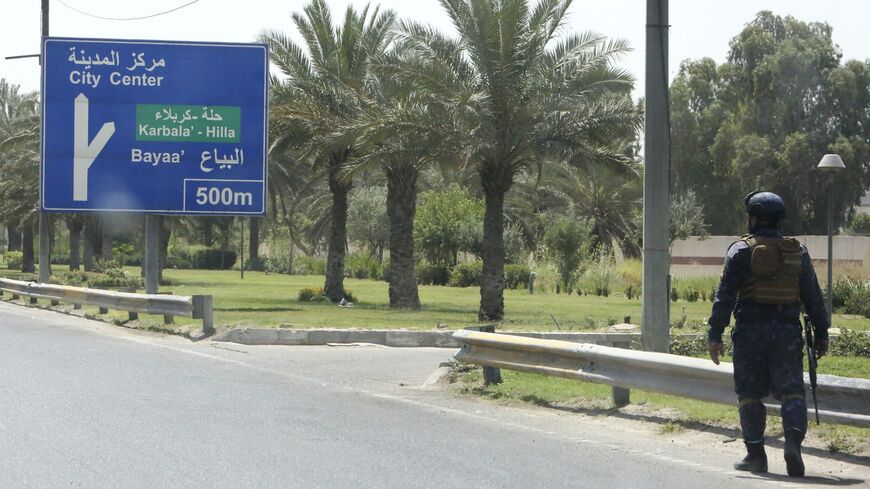 A member of the Iraqi security forces stands guard June 10, 2021, on a main road outside Baghdad International Airport. Iraq is planning to build a new administrative capital near the airport. - SABAH ARAR/AFP via Getty Images

BAGHDAD — The Iraqi Council of Ministers headed by Prime Minister Mustafa al-Kadhimi announced last week the start of work to build a new administrative city on the outskirts of the Iraqi capital, Baghdad, which is to stretch over an area of ​​165 square miles. Planners hope that the city, which is to bear the name Al-Rafeel, will grease the wheels of the capital’s economy and help resolve the area's housing crisis.

Baghdad, whose population is estimated at more than 7.3 million, is overcrowded. It has grown by more than 2 million since the turn of the century in part because it is home to various government departments and agencies that offer plenty of job opportunities compared with the rest of the central and southern provinces.

Baghdad has been quite difficult to reconfigure due to overpopulation and old structures. This is a major reason why the government decided to establish a new city that would become the administrative capital of Iraq.

The commission said in a statement that the project would be executed in four stages: the first would involve residential, educational, commercial, medical, service, and recreational complexes and would extend over 25 square miles, contributing to the provision of 75,000 housing units. The second stage would include the launch of industrial, logistics and services projects adjacent to the airport, while the third stage would witness the launch of environmentally friendly agricultural and food projects. The fourth stage would take place in Abu Ghraib district.

Ahmed Yassin al-Hashemi, the associate director of Baghdad's Planning Department, told Al-Monitor that the Al-Rafeel project was part of the new development plan for the capital. The project includes a comprehensive, multiyear study of the capital conducted by the urban planning companies Khatib and Alami and the department.

Hashemi said the plan also includes finding solutions to slums and major violations to the building code. "There are recommendations that have been made, including organizing and determining how to deal with violators based on a specific timetable. But this issue is still under examination given its complexity, knowing that many projects have been halted due to violations.”

The Al-Rafeel city project has sparked political controversy. The Sunni Azm coalition led by Khamis al-Khanjar condemned what it called “the destruction of hundreds of miles of agricultural land within the area surrounding the Baghdad Airport.”

Khanjar said in a statement that the city’s project “includes dimensions that seek to bring about demographic change in the west of the capital,” as the areas in the west of Baghdad are predominantly Sunni and extend toward the Sunni province of Anbar as well. Sunni parties are voicing concerns that the Al-Rafeel project will have a Shiite majority. About two-thirds of the country's population is Shiite.

Former parliament Speaker Mahmoud al-Mashhadani, a Sunni, told Al-Fallujah TV channel, “The Al-Rafeel project raises Sunni sectarian fears, and the prime minister should stay away from issues that cause political and social differences.”

However, the president of the National Investment Authority, Suha al-Najjar, said, “The statements of the Sunni leaders regarding the Al-Rafeel city project are inaccurate and aim to stir sectarian sentiments for electoral propaganda purposes."

She said, “The city of Al-Rafeel will never be executed in the agricultural lands surrounding the Baghdad Airport, as it is intended for all Iraqis and will contain industrial, agricultural and investment projects.”

She threatened to resort to the judiciary to hold accountable those making accusations about the Al-Rafeel project.

The Iraqi government is to put out to tender during the next month a set of investment opportunities in the Al-Rafeel project in order to receive bids from local, Arab and international companies to build hundreds of housing units, which would be allocated to employed workers as an initial step to rid Baghdad of slums and put an end to the encroachment upon agricultural lands and green spaces within the capital’s neighborhoods. Slums massively spread after 2003, thus causing enormous pressure on old and dilapidated infrastructures.

The bottom line is that steps are being taken to turn a long-held dream for the administrative capital project into reality.

It remains unknown whether the next government will continue to work on the project or will cave into political pressure. It all may depend on the results of the early general elections scheduled for October.