The Pentagon and State Department are exploring "creative ways" to help the Lebanese armed forces offset their costs amid financial crisis. 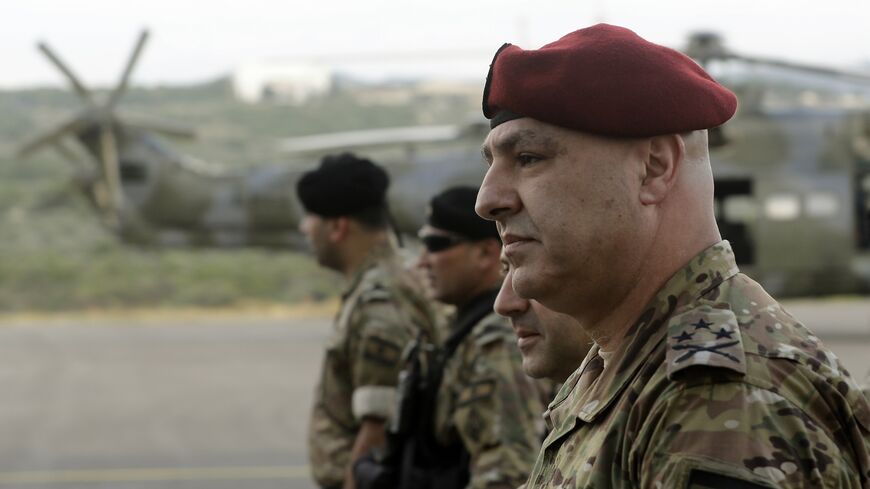 Gen. Joseph Aoun (R), the Lebanese military's chief of staff, arrives for a ceremony marking the country's reception of four A-29 Super Tucano aircraft given by the United States, at Hamat air base, north of Beirut, on June 12, 2018. - JOSEPH EID/AFP via Getty Images

The State Department notified Congress last week of a plan to grant the Lebanese armed forces an additional $15 million in foreign military funding, bringing the fiscal year's total to $120 million.

The funds, to be drawn from the overseas contingencies operations budget, will cover spare parts to maintain US-made military equipment as well as longer-term support for Lebanon's border security and counterterrorism operations.

But US aid alone may not be enough. The Lebanese military's top commander, Gen. Joseph Aoun, has been sounding the alarm for months about the army’s inability to adequately pay the more than 80,000 troops under his command.

Lebanon’s currency has lost 90% of its value since late 2019, leaving the country with worsening food, fuel and electricity shortages from which the armed forces are not exempt. The country’s financial implosion is likely to be among the worst the world has seen in 150 years, the World Bank said earlier this month.

The increase in US support was discussed during a mostly virtual meeting between Aoun and Pentagon and State Department officials in Beirut last month.

Led by C.S. Eliot Kang, the State Department’s top official for arms control and international security, the US side laid out a five-year plan to build up the Lebanese military, borrowing from the policy playbook for Egypt and Jordan.

For the Lebanese Armed Forces (LAF), the needs are urgent: spare parts, tires, food, gasoline and other basic necessities.

Aoun publicly warned in March that his soldiers were “suffering and hungry” and spoke of growing discontent in army’s ranks after the government slashed the Lebanese military's funding.

“What do you plan to do? ... Do you want the army or not?” Aoun admonished Lebanon's political leaders, who have been unable to form a government.

The Lebanese armed forces have pushed back on reports of desertions, but fears that its ranks may soon begin fracturing — as they did during the civil war that began in 1975 — have added to the urgency of the moment.

A year ago, Lebanon's military announced it would stop serving meat to its personnel amid food shortages. Monthly salaries have dropped eightfold to roughly $100 for soldiers, while many officers now earn roughly $400 per month.

Aoun said Tuesday that he was ready to “go to the ends of the earth” to obtain assistance from governments abroad “so that the army can remain on its feet.”

The Biden administration is weighing options that could help the Lebanese military pay its troops’ salaries, according to an official who requested anonymity to discuss the matter.

Experts say the aid cannot come fast enough. “There needs to be some sort of cash assistance,” said Randa Slim, director of the conflict resolution program at the Middle East Institute in Washington.

Despite support from some in the Pentagon and an apparent green light from congressional Democrats last month, Washington’s ability to directly fund the Lebanese armed forces remains limited by the Arms Export Controls Act and other legislative restrictions.

“The Defense Department and Department of State are exploring whether there are creative ways to help the Lebanese Armed Forces offset the costs … of salaries,” she wrote. She said one way of doing this could be by supporting some of the Lebanese military's other operational costs.

With no end in sight to the political wrangling preventing a potential International Monetary Fund bailout for Lebanon, the US administration has turned to allies to keep Aoun’s forces afloat for now, encouraging Gulf states to engage with Beirut and urging Israel’s new government to be more flexible in its maritime hydrocarbon dispute with its neighbor to the north.

On Thursday, France’s Defense Ministry convened a virtual donors’ conference of the International Support Group for Lebanon, including the United States, Russia, China and a number of Gulf states in hopes of raising tens of millions of dollars to prop up the Lebanese armed forces.

While the outcome of the meeting remains unclear, France, Egypt, Oman and Morocco have already sent tons of food to the Lebanese military.