Drones were intercepted and brought down near the air base that hosts US forces. 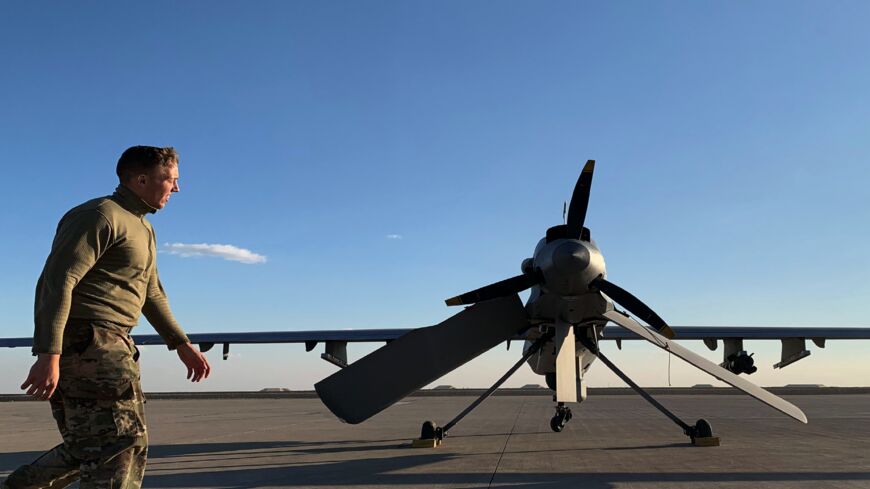 A picture taken on Jan. 13, 2020, during a press tour organized by the US-led coalition fighting the remnants of the Islamic State, shows a US soldier walking past a drone at the Ayn al-Asad air base in the western Iraqi province of Anbar. - AYMAN HENNA/AFP via Getty Images

The encroachment, knocked down by US counter-rocket, artillery and mortar systems (C-RAM), is the latest targeting the base that houses Western military contractors and has been home to US Reaper drones used largely in operations against the Islamic State (IS).

No group has claimed credit for the incident, which follows a previous drone attack on Ayn al-Asad on May 8. US and international coalition sites have increasingly come under attack from unmanned aircraft in Iraq in recent months, a problem that has raised significant concern for US military officials.

Earlier this year, a fixed-wing drone carrying explosives struck and damaged a CIA storage facility at an air base in Erbil, in Iraq’s autonomous Kurdistan Region, alarming officials in Washington about how the identity of the site may have leaked, according to The Washington Post.

In January, Saudi Arabia’s royal palace complex in Riyadh was hit by a drone that Saudi officials believed was launched from Iraq.

Other attacks involving rockets in Iraq have frequently been attributed to Iran-backed militias. Just a month after taking office, President Joe Biden authorized an airstrike against a site used by Kataib Hezbollah on the Syria-Iraq border after a rocket barrage in and around Erbil’s air base wounded civilians and killed a US defense contractor from the Philippines.

Some 2,500 US troops remain in Iraq as a residual force following the multinational coalition against IS. US and Iraqi officials are set to continue dialogue about the future of the American military presence in the country, which is firmly opposed by powerful pro-Iran factions in Iraq.

The head of US forces in the Middle East, Gen. Kenneth “Frank” McKenzie, on Monday attributed the uptick in attacks to the failure of such factions to oust US troops from Iraq via political pressure last year following the US killing of Iranian spymaster Qasem Soleimani and his Iraqi protege, Abu Mahdi al-Muhandis, in Baghdad.

The Pentagon under Biden has been reticent to immediately blame Iran’s government for such incidents in the region. US officials are currently pursuing indirect talks with Iranian counterparts in Vienna in a bid to curtail Tehran’s nuclear program.

McKenzie has increasingly emphasized the drone problem in recent months, going so far as to tell Congress in April that their proliferation in the Middle East means the US military no longer enjoys complete air superiority “for the first time since the Korean War.”

US Special Forces are experimenting with methods to jam drone communications and de-link them from their ground-based operators, the general noted following a trip to Syria last month.

The general on Monday said he was "pleased" with Central Command's progress on helping to close gaps in the air defense systems of Saudi Arabia, which typically faces multiple rocket and ballistic missile barrages per week launched by Yemen’s Houthi rebels. US officials believe the weapons technology originates from Iran.

A US Navy ship seized a massive cache of automatic rifles, machine guns and rockets aboard an unmarked boat in the Arabian Sea last month in the latest such interdiction.

McKenzie said Monday the United States is "still finalizing attribution" to determine the origin and purpose of the shipment.

"There's a lot of evidence for what these shipments are and where they're going. I'll just leave it at that," he added.