Under the auspices of the Russian forces and their affiliated militias, hundreds of displaced people are returning to their villages in the Lajat region located in the countryside of Daraa governorate to find extensively destroyed houses lacking basic power and water services. 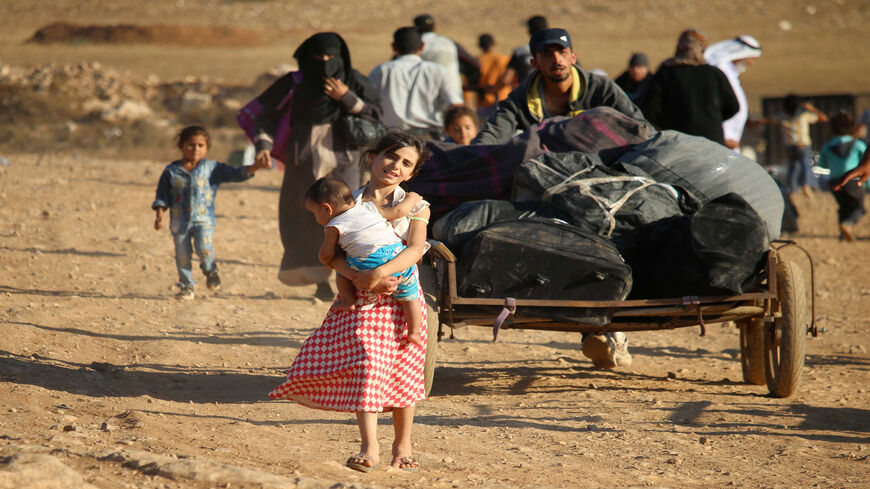 Syrian refugees carry belongings as they return to Syria after crossing the Jordanian border near the town of Nasib, in the southern province of Daraa, Syria, Aug. 29, 2017. - Mohamad Abazeed/AFP via Getty Images

ALEPPO, Syria — Hundreds of displaced Syrians have returned to their villages in the Lajal region of Daraa province, under the auspices of the Russian forces that mediated with the Syrian government for the return of the displaced to their areas of control.

On May 22, the Russian Sputnik agency said, “More than 420 displaced people from the village of Eyeb in the northern countryside of Daraa returned home years after they fled repeated attacks launched by the Islamic State, which took control of the adjacent Lajat region in the northeastern countryside of the [Daraa] province.”

The agency quoted its correspondent to the area as saying, “Eyeb is now under the control of the Syrian army in the wake of reconciliation agreements that were concluded under the auspices of the Russian forces.”

It added that most of the returning families lived in a small camp under extremely difficult conditions, especially in light of the harsh winter season.

The agency went on to say, “The return of the displaced was coordinated between the Syrian regime and the Russian Reconciliation Center, and resulted in the return of 40 families who were living in a camp near the village of al-Ghariya in the eastern countryside of Daraa.”

On Feb. 19, the dignitaries and residents of the villages and towns of the Lajat region appealed to the Russia-backed Eighth Brigade, a subdivision of the Fifth Corps, to help them return to their homes.

The Russian forces, in cooperation with the Eighth Brigade, had previously helped a number of the displaced from the town of Eyeb in the Lajat region return to their homes Jan. 22.

A military official in the Eighth Brigade in southern Syria told Al-Monitor on condition of anonymity, “More than 50 families from the Lajat region have returned to the villages of al-Shomara, al-Alali, al-Shiyah and al-Mudawara, under the auspices of the Eighth Brigade and the Russian forces in coordination with the regime forces.”

The military official noted, “In the coming period, we will be cooperating with the Russian forces to have all the people who were displaced from the Lajat region return to their homes. They had to leave them as a result of the bombing of the regime forces during the military campaign they launched on the province in the summer of 2018.”

He added, “The return agreement in the Lajat region was carried out with guarantees from Russia and the Eighth Brigade that they would prevent any harassment of the returnees on the part of the regime forces and the security services, which shall keep their military checkpoints in the vicinity of the area without any interference in civilian affairs.”

In July 2018, reconciliation agreements were signed in southern Syria between the Syrian opposition and the government forces under Russian auspices. Subsequently, the process of settling the security conditions began across the towns and areas in Daraa concerned by the agreements, and all displaced families were supposed to return to their villages accordingly. Three years into this reconciliation, the return of the displaced had yet to materialize in the Lajat area.

A media activist in the Lajat area told Al-Monitor on condition of anonymity, “The displaced have returned to their villages after negotiations between the Russian Military Police and the Eighth Brigade on the one hand and the regime’s security and military services on the other over the past two months.”

He noted, “The convoy of the displaced residents arrived in the Lajat area accompanied by a convoy of the Russian Military Police and members of the Eighth Brigade who secured the main roads leading to the Lajat area one day ahead of the implementation of the return agreement."

The activist said, “There are still some villages in the Lajat region that are completely empty, such as the villages of Hosh Hammad and al-Taf, where the Assad regime has yet to allow residents to return.”

A displaced person returning to the Lajat region told Al-Monitor on condition of anonymity, “The displaced families who recently returned to the villages of al-Shomara, al-Alali, al-Shiyah and al-Mudawara were shocked by the massive destruction that befell their homes. The displaced found most of their homes destroyed due to the regime’s previous bombing of the area, in what seemed to be a sort of revenge taken on the residents of the Lajat region. This region was an important stronghold of the Free Syrian Army in the early years of the revolution, as it was a rugged and fortified area where the fiercest battles were fought with the regime forces.”

“Many of the displaced families who recently returned to the area found shelter under trees because their homes were unfit for habitation and lacked basic water and power services. People are currently getting water from old wells containing rainwater,” he added.

Mamoun al-Khatib, director of the opposition Shahba Press Agency, told Al-Monitor, “The Lajat region in the Daraa countryside witnessed displacement operations in 2018 during the military campaign of the regime forces and their allied militias. After the settlement agreement was signed in the same year, special forces from the Lebanese Hezbollah stationed in the Lajat region and the regime forces forcibly emptied several villages of their residents and bulldozed their homes, as the regime security services launched a massive arrest campaign against hundreds of civilians.”

He said, “The Lajat region is still home to military positions belonging to Hezbollah and Iranian militias, [which were] seeking to turn it into a military and security outpost for their operations in southern Syria. This region is characterized by a strategic geographical location connecting it to the governorates of Damascus, Suwayda and Daraa and has a wide and tortuous rocky terrain where military vehicles cannot move. There are also wide and deep rock caves located underground, which protects these militias from the monitoring and military operations targeting them."