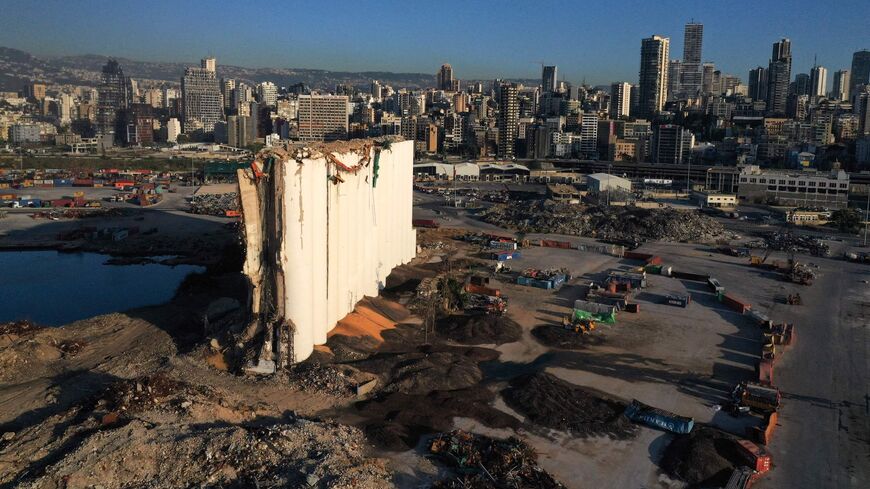 An areal view shows Beirut port on May 27, 2021, with the grain silos in the foreground, damaged in a massive explosion that killed more than 200 people and injured scores of others on Aug. 4, 2020. - DYLAN COLLINS/AFP via Getty Images

Four Palestinians who completed bachelor's degrees in architecture at Birzeit University in the West Bank won first place in an international competition for the design and reconstruction of the destroyed Port of Beirut in Lebanon. The explosion of Warehouse No. 12 on Aug. 4, 2020, killed nearly 200 people, injured more than 6,000 and caused massive material damage to residential buildings and commercial establishments.

The 2021 Phoenix Prize is given by iDAR-Jerusalem, a Palestinian nonprofit organization that promotes architecture by identifying and celebrating innovative and outstanding design ideas. Its Haifa Award for Design and Architecture

On May 17, the jury announced that the project titled “The Aftermath: Productive Beirut” won first prize.

The project was submitted by the Palestinian team named MAD Architects, which included two young women and a young man. Another 13 projects were submitted from entrants in the United States, Russia, Poland, Palestine, Israel, Italy, Saudi Arabia, the Netherlands, Bahrain, Portugal, China and Lebanon.

Majd al-Maliki, a member of the winning team, told Al-Monitor, “The architectural project puts forth a new vision that will make Beirut a productive capital that relies on its own potential in the aftermath of the explosion that led to major crises in Lebanon and caused the destruction of many houses and increased unemployment rates. The blast also caused food shortages as a result of the destruction of the grain silos.”

He added, “The project seeks to reuse what remains at the site, recycling materials such as steel, wood and glass that were scattered throughout the city. Such materials would be reused in the reconstruction process.”

Maliki added, “One of the main aspects of the project is its effort to advance the local economy by providing creative spaces for workshops, production spaces and vocational and agricultural schools, among others, to fight unemployment, which was exacerbated after the explosion, and create future jobs for hundreds of Lebanese.”

“The project also aims to quickly provide temporary housing units for 300,000 Lebanese who lost their homes in the explosion," He stressed. "These temporary homes are modular and can be developed in the future into permanent housing or workplaces.”

Alaa Abu Awad, another member of the team, told Al-Monitor, “The project also focuses on creating public spaces and local markets for the residents, as well as preserving the collective memory of the Lebanese by focusing on the grain silos,” she added.

Abu Awad said, “The project required a great deal of effort on the part of the team members and took four months of continuous work and research.” He added that as Lebanon hosts hundreds of thousands of Palestinian refugees in its territory, the Palestinian team's project is also a gesture of support for the Lebanese people.

Abu Awad said, “There are a number of challenges that the team faced, the most prominent of which was the lack of information about the city of Beirut, the number of demolished buildings or the condition of the remaining buildings.”

She explained that the team resorted to social networking websites for information about the damage as well as maps sent by the Haifa Award for Architecture and Design.

Experts have warned that the grain silos that were badly damaged by the Port of Beirut explosion must be demolished before they collapse.

The Swiss Ammann Engineering company reported in April, “These silos are leaning at a rate of two millimeters per day, which is a lot from a structural point of view.” It explained, “By means of comparison, the Tower of Pisa in Italy was leaning by about five millimeters per year before it was stabilized by special engineering procedures.”

The grain silos make up a massive concrete structure 48 meters tall with a capacity of more than 100,000 tons. They have become a symbol of the catastrophic explosion, as they absorbed much of the devastating blast, thus protecting the western part of the capital from the level of destruction that befell the eastern part.