After Ra'am became the first Arab party join an Israeli government in decades, some Palestinian citizens of Israel see the move as "historic" while others remain skeptical. 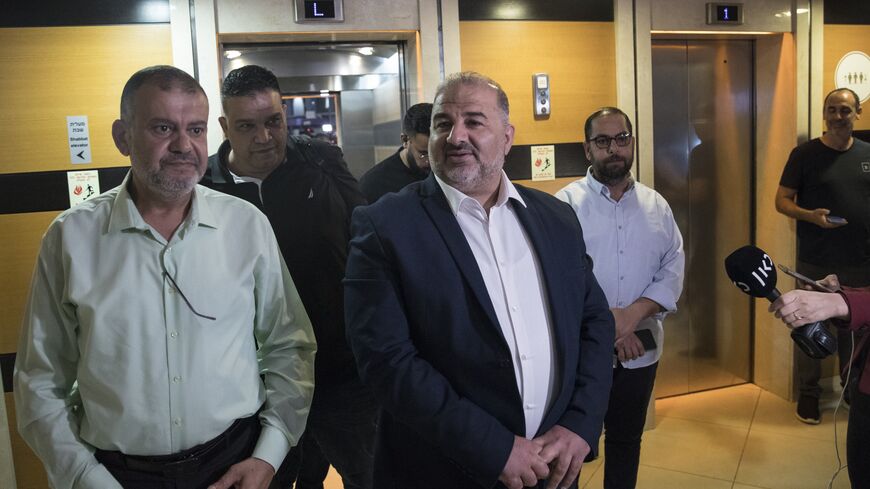 The Israeli declaration of independence announced on May 14, 1948, includes a call "to the Arab inhabitants of the State of Israel to preserve peace and participate in the upbuilding of the State on the basis of full and equal citizenship and due representation in all its provisional and permanent institutions."

Now, 73 years since the founding of Israel and after decades in which Palestinians were ignored, bypassed and had their national identity denied, a Palestinian citizen of Israel — the head of the United Arab List party (Raam), Mansour Abbas — has added his signature to a coalition government agreement cobbled together by Yair Lapid, the head of the Yesh Atid party.

While Abbas has not succeeded in snatching any government position either at the ministerial or deputy ministerial level, he has proclaimed that joining the coalition will have long-term results, especially in the economic and development sectors. According to Abbas, the new Israeli government will earmark 52 billion shekels (about $16 billion) to be spent in the Arab community over the next four years. Unrecognized Bedouin villages and towns are to be gradually recognized and the law fast-tracking the demolitions of homes are to be reviewed with an eye toward ensuring that demolitions for homes built without a license should be suspended until there are approved zoning plans for any particular town or village. Palestinian citizens of Israel (like Palestinians in Jerusalem) say that they are forced to build without a license because of the restrictions on issuing housing permits due to the absence of approved zoning plans.

The success of Abbas and his party will be measured by whether it gives cover to further Israeli human rights violations or instead ushers in a new era in which Palestinian citizens of Israel are recognized and granted their due as citizens of the country.

On the larger political level, the only issue that appears to unite the coalition parties appears to be their hatred of Prime Minister Benjamin Netanyahu. It is unclear whether Netanyahu and his hard-core Likud supporters will ease off their pressure on the new coalition members, especially those on the right-wing side, with the aim of influencing the vote of confidence due to take place by June 14.

When it comes to the Palestinian-Israeli conflict, it appears that the coalition agreement makes little reference to any change in policy despite the 11 days of violence between the Israeli army and the Palestinian resistance in Gaza last month.

Ahmad Deek, director-general of the Palestinian Foreign Ministry, told Al-Monitor the Palestinian government has three criteria when dealing with any Israeli government. They are, “Is it a legitimate Israeli government; is it interested in peace and willing to be a genuine partner for peace and justice; and, finally, is it willing to curb activities that are contrary to international law such as settlements, house demolitions and the attempts to make Jerusalem an exclusively Jewish city.”

Ziad Aby Zayyad, a former minister in the Palestinian government, sounded more skeptical. "The new government, with the support of Mansour Abbas's Islamic list, may succeed in getting some cosmetic improvements in the Arab affairs. It had asked for the abolishing of the Kiminst [house demolition] law but was not taken seriously. Let's wait and see, especially considering that the life of this government may be shorter than expected."

The focus by the Raam party on economic and developmental issues of the Arab community in Israel rather than on national issues has been a source of criticism by some; the recent developments took place only after the Joint Arab List was splintered and weakened. Palestinian nationalists in Israel are even more unhappy with the timing of Arab inclusion in the coalition as it comes when there is a heightened feeling of unity between Palestinians in Israel, the occupied territories and the diaspora. This was evidenced by the one-day strike Arab and Palestinian communities held in Israel, the West Bank and Gaza on May 18 in protest of the Israeli attacks on Gaza and the attacks in many mixed Arab-Jewish towns in Israel. Diana Butt, a former legal representative to the Palestinian negotiating team who lives in Haifa, told Al-Monitor that the new coalition agreement involving the participation of an Arab party is “idiotic.”

Although many see the inclusion of Arabs in the latest coalition agreement as historic, the true test will only be measured on the ground as the public assesses whether the decision will improve their lives and those of fellow Palestinians in the occupied territories.