The World Bank said this month that the crisis is one of the worst in modern history. 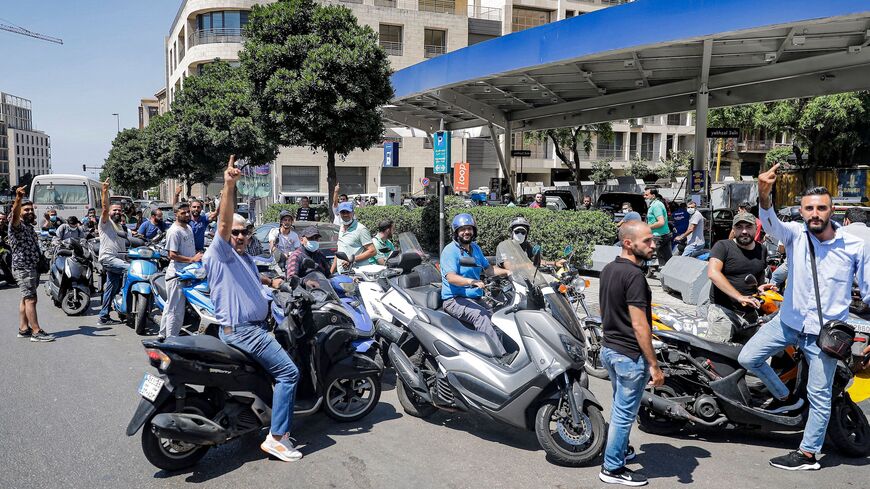 Scooter motorists waiting outside a petrol station in Lebanon's capital Beirut on June 29, 2021, raise their middle fingers in protest against hikes in the price of fuel. - JOSEPH EID/AFP via Getty Images

Protests are ongoing in Lebanon against the country’s deteriorating economic crisis.

People took to the streets in the northern city of Tripoli on Saturday to protest the continued depreciation of the Lebanese pound. The currency was valued at its official rate of around 1,500 pounds to the US dollar for decades, but there are now multiple exchange rates being used in the country. The unofficial rate on the black market is approximately 17,000 pounds to the dollar or lower at present, reflecting a massive drop in value.

Protests also occurred across the country on Monday.

On Tuesday, the Lebanese news outlet The Daily Star reported that the government raised fuel prices by more than 35%. The price of 95-octane gasoline, which can be used in many normal-size vehicles, was set at 61,100 Lebanese pounds per 20 liters (5 gallons), an increase of 15,900 pounds. The same day, demonstrators blocked off roads in the country in protest. Some later reopened, according to Lebanon’s official National News Agency.

Lebanon has been experiencing an economic crisis since 2019. The situation has been marked by the depreciation of the pound, rising prices of essential goods and job losses. The Beirut port explosion last year and the COVID-19 pandemic further worsened conditions in the country. Earlier this month, The World Bank said the Lebanese crisis was among the top 10 worst in the world since the mid-19th century, calling the government’s response “highly inadequate.”

The crisis is worsening. Viral videos on Lebanese social media show massive lines of cars at gas stations, which are closed much of the time due to fuel shortages. The Lebanese news outlet NOW reported on Tuesday that more Lebanese are making the risky trip by sea to Cyprus to escape.

Protests have been held throughout the crisis. Earlier this month, both public and private sector employees partook in a general strike. Much of the anger is focused on politicians, who many believe have done little to stem the tide of economic misery. Lebanon has had a caretaker government since last August, with parties unable to agree on a new cabinet despite international pressure to form a government that can institute anti-corruption and governance reforms that France, the United States and others want to see before pledging more assistance.

Some high-ranking Lebanese finance officials are also accused of transferring hundreds of millions of dollars outside of the country. Protesters also gathered outside banks on Monday.