Israeli-Hamas conflict continues to reverberate in US

US backers of Israelis, Palestinians argue their cases. 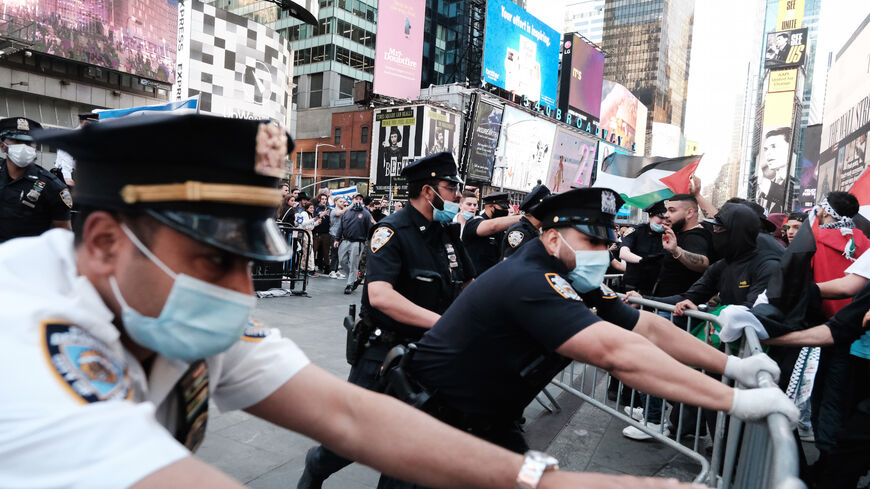 Pro-Palestinian protesters face off with a group of Israel supporters and police in a violent clash in Times Square on May 20, 2021, in New York City. - Spencer Platt/Getty Images

Last month's 11-day conflict between Israel and Hamas continues to reverberate in the United States.

The conflict spilled over into US cities and congressional debate, and on Tuesday, a delegation of Republican senators visited Israel to express their support for the Jewish state.

From May 10 until an Egyptian-brokered cease-fire took hold May 20, Hamas rocket fire hit Israeli cities and Israeli airstrikes devastated the Gaza Strip, killing at least 243 Palestinians and 12 Israelis. The conflict began over tensions in disputed Jerusalem and also included unprecedented communal violence between Jews and Arabs in Israel.

New York City was one US city that saw clashes between pro-Israel and pro-Palestinian protesters. On May 11, fighting ensued when pro-Israel counter-protesters showed up at a Palestine rally near the Israeli Consulate. There were more fights in the city between the two sides May 20. Other protests in support of the Palestinians and Israel were peaceful.

Nerdeen Kiswani, the founder and leader of Within Our Lifetime, a Palestinian-led community organization in New York, told Al-Monitor, “All the rallies had Zionist agitators shouting slurs at Palestinians.” She added, “We’re being antagonized by pro-Israel thugs.”

Kiswani said a man charged pro-Palestine protesters and spat at them during the protest near the Israeli Consulate. A video she sent to Al-Monitor showed a man hitting another man who was wearing a keffiyeh, a headdress commonly worn by Palestinians. The video also showed someone stealing a Palestinian flag from a protester.

She said the protests focus on the “genocide” being perpetrated against Palestinians. “Anti-Semitism is constantly used as a tool by Zionist Israel supporters to malign the Palestinian cause,” she said. “We’re just pro-Palestine. We stand against bigotry and hate of all.”

Kiswani accused police in New York of not protecting pro-Palestine protesters and targeting them for arrests. At least 26 people were arrested in relation to the May 20 protest. The New York Police Department did not respond to Al-Monitor’s request for information on who was arrested.

Yosef Rapaport, a New York-based media consultant, said that as someone who is visibly Jewish, he is afraid in the current climate. He referred to concerns of religious Orthodox and Hasidic Jews, who are recognizable due to their skullcaps, beards and other features.

“It’s scary. Jews who are recognizable experience things in a different way,” he told Al-Monitor. “You’re conscious about it all the time.”

Rapaport said he is not a Zionist but wants Israelis to live in “safety.” He said it is unfair to target US Jews with violence over the Israeli-Palestinian conflict.

“We’re Americans — not Israeli expats,” he said. “Why do you think we’re responsible?”

He said the hatred of Jews expressed on the internet is more concerning than the clashes at the protests. “Fighting on the streets is usually between two radicals,” said Rapaport. “I’m more bothered by people screaming on the internet. From a historical perspective, this is much more scary.”

There were various other incidents involving violence in the United States. On May 18, a group of men jumped out of cars brandishing Palestinian flags outside a restaurant in Los Angeles and physically attacked people while asking if they were “Jews.” A day earlier, a synagogue outside of Chicago had a window broken and a “Freedom for Palestine” sign was left there. On May 24, an elderly Jewish man was thrown to the ground by another man in Las Vegas during a conversation about the conflict.

On Friday, Biden released a statement condemning anti-Semitic attacks in US cities, calling them “un-American.” He did not address the fighting at the protests.

On the other hand, some more left-leaning Democrats and progressives in Congress condemned both anti-Semitism and bigotry against Muslims in response to the events that took place in US cities. Independent Sen. Bernie Sanders of Vermont tweeted May 21, “We’ve recently seen disturbing antisemitic attacks and a troubling rise in Islamophobia.” Democratic Rep. Cori Bush of Missouri tweeted May 22, “The work of dismantling antisemitism, anti-Blackness, Islamophobia, anti-Palestinian racism, and every other form of hate is OUR work.” Democratic Rep. Jamaal Bowman of New York wrote on Twitter on May 21, “We’ve seen an increase in antisemitic and Islamophobic hate, in NYC and nationwide.”