After registering its highest daily caseload in more than two months, Israel has reimposed a mandate on mask usage indoors. 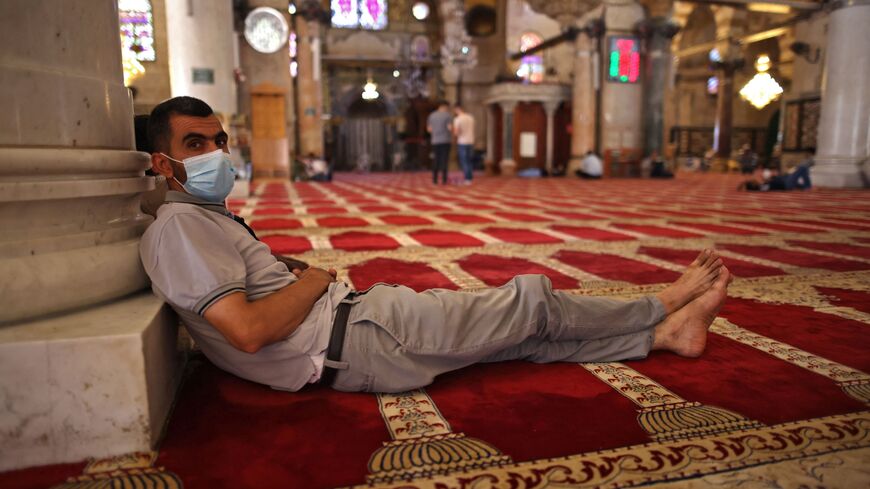 A Palestinian Muslim worshipper wears a face mask during Friday prayers inside the Al-Aqsa mosque compound in Jerusalem on June 25, 2021. The Israeli Health Ministry reimposed a requirement for masks to be worn in enclosed public places following a surge in COVID-19 cases; the requirement had been dropped 10 days before. - AHMAD GHARABLI/AFP via Getty Images

Israel is restoring requirements on indoor masks following a jump in COVID-19 cases and concerns about the fast-spreading Delta variant.

Beginning at noon Friday, masks are required in all indoor spaces, with the exception of homes. Children under the age of 7 do not have to wear a mask, nor are they required during physical exercise.

Despite the uptick in cases, Ash noted that there has not been an increase in hospitalizations or deaths. He added that he did not expect a fourth wave, but there is the "potential" for the virus to spread further.

"It's clear it's a factor of time, that not enough time has passed," Ash said. "But we hope the vaccines will protect us from a rise in hospitalization and difficult cases."

The Health Ministry also called on Israelis to wear masks even in crowded outdoor spaces, including the Pride march in Tel Aviv on Friday afternoon. Those who are not yet vaccinated are encouraged to stay home from large public gatherings.

Israel is a world leader in vaccinations, and as a result, reopened its economy in May. More than half of Israel’s population of 9 million people is fully vaccinated, and the government recently expanded vaccine eligibility to include children 12 years and older.

But the spread of the Delta variant of COVID-19, which was first detected in India, is threatening to undermine Israel’s virus response. Officials said that as of Wednesday, some 50% of the nearly 900 people infected with the coronavirus in the past month had been fully vaccinated.

Israeli Prime Minister Naftali Bennett described the recent uptick in infection as a "new outbreak" in Israel, saying the “goal at the moment, first and foremost, is to protect the citizens of Israel from the Delta variant.”

Israeli officials have said international travel is a source of the Delta variant’s spread. The country announced this week it would be pushing back the date for which vaccinated tourists are allowed to enter Israel from July 1 to Aug. 1.