While candidates for the election this Friday have a long list of promises to fix the economy, inefficiencies in Iran's political structure limit the president's ability to make lasting change. 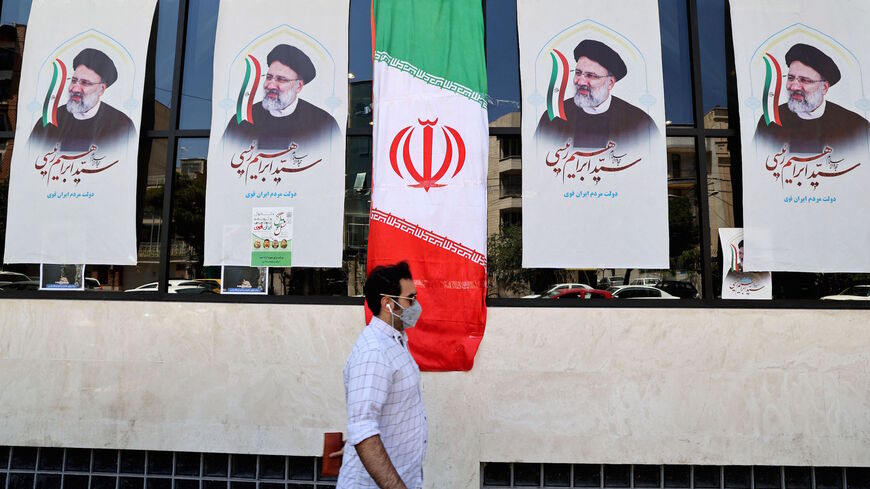 An Iranian man walks by posters of presidential candidate Ebrahim Raisi outside a campaign office in Tehran on June 7, 2021. - ATTA KENARE/AFP via Getty Images

With Iranians heading to the polls to elect a new president later this week, tackling economic challenges is the top priority for many voters. The average Iranian has faced high inflation and economic stagnation over the past few years, and a basic expectation is for the next president to restore some of the lost purchasing power and induce a degree of economic stability. That is why all seven candidates use any opportunity to lay out plans on how to address the country's economic ills. Though these campaigns and televised debates allow political forces to point to the existing shortcomings, their promises are in most cases difficult to achieve.

Ebrahim Raisi, the current head of the Judiciary and the front runner as a candidate, has presented a list of 50 promises related to the economy, but an assessment of some of the key objectives will underline how detached he and his campaign team are from the realities on the ground. Here are some examples that are all planned for the next four years:

Raisi’s main opponent in this election is Abdolnasser Hemmati, the outgoing governor of the central bank of Iran (CBI) and an economic expert. Interestingly, his promises are more structural, such as downsizing the government, the expansion of capital markets, independence of the CBI, etc. Though he was in a less powerful position compared to Raisi, again many will ask why he failed to address some of the economic shortcomings while he had the position of CBI governor.

The honest answer will be that not only the CBI governor but also the president himself faces many limitations in Iran’s complex power structure. The majority of the country’s economic deficiencies are a direct consequence of a political structure that impedes technocratic approaches and paves the way for politicized economic and trade decisions, while the country’s resources are subject to ongoing bargaining processes between interest groups. In fact, in his televised interview as part of his campaign, Hemmati underlined that a group of shady stakeholders interfere in economic decisions to safeguard their own corrupt interests.

As such, candidates have no choice but to resort to populist promises such as increasing the amount of the monthly handout that the majority of Iranians receive from the government. Incidentally, the rial amount has not changed since its introduction in December 2010. However, the real value of the monthly figure of 445,000 rials has diminished over time — it equaled above $40 in 2010 but has a value of less than $2 today.

One of the hard-line candidates, former Iranian Revolutionary Guard Corps commander Mohsen Rezaei, who has been in top political positions since 1997, has pledged to pay a monthly amount of 4.5 million rials (about $20) to 40 million Iranians, potentially creating an additional financial burden for the government. He argues the scheme could be financed through the actual savings within the larger scheme of subsidy reforms; however, he fails to present a plan that takes into account all social, economic, inflationary and financial aspects of the process. In fact, a hike in fuel prices was the main reason for the unrests in November 2019 — an experience that no government would like to repeat.

Then there are campaign pledges that are simply ridiculous, such as hard-liner Qazizadeh Hashemi claiming he will resolve the issues relating to the Tehran Stock Exchange (TSE) within three days. Evidently, losses made by petty investors on the TSE reflect an important concern for many voters. However, it is an issue that is already being tackled by the legislative branch with a proposal that the government should compensate petty investors as the capital market decline was caused by incompetency in the government-owned banking sector. As can be seen in the above pledge, Hashemi’s campaign promises are targeted at specific groups. His other economic pledge is to pave the way for cheap loans with a sum of 5 billion rials (equals $21,500 at the free market rate) extended to young couples — an undertaking that would be beyond the capacities of the banking system in Iran.

Iranian commentators have already responded to some of the unrealistic campaign pledges. University professor and economist Amir Hertemani believes the absence of political parties as a platform to produce expert approaches has led to the fact that candidates produce impractical and unrealistic proposals.

Even conservative figures have reacted angrily to some campaign statements. In an interview, arch-conservative politician Mohammadreza Tarraghi criticized the candidates for making campaign promises without disclosing where the resources for any of their initiatives would come from.

Despite all the mismatch between promises and actual realities, there is one scenario in which something positive will emerge: If the current talks to restore the Iran nuclear deal are successful and Iran can access its foreign hard currency assets and export more oil, then there will be resources that will generate economic momentum regardless of who wins the presidential election.

Nonetheless, the fact remains that Iran’s economic woes are mainly caused by inefficiencies in the political structure. Therefore, as long as a president does not engage other power centers to carry out structural and legal reforms, economic improvements will remain short-lived and unsustainable. That is why the most important campaign promise by any of the candidates is Hemmati’s pledge to “resolve economic problems through political interaction.” How far any president can go with political interaction is unclear. Judging from Hassan Rouhani’s eight-year tenure, it is close to impossible as long as institutions like the Guardian Council impose their hard-line views on all processes in the country.