Qataris whose ancestors fled Palestine hastily decades ago speak up following the deadliest violence in years between Israelis and Palestinians. 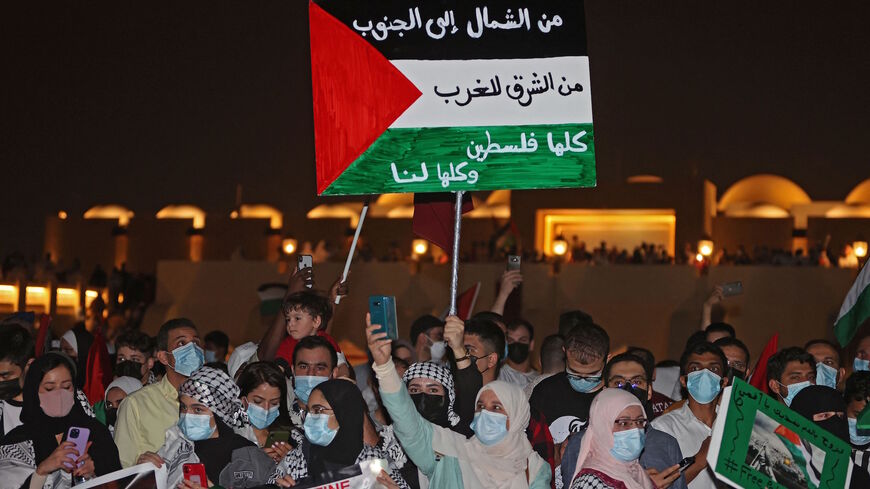 People rally in solidarity with the Palestinians outside Imam Muhammad Abdel-Wahhab Mosque in the Qatari capital, Doha, on May 15, 2021. - KARIM JAAFAR/AFP via Getty Images

“Qatar announces $500 million in support for the reconstruction of Gaza,” Qatari Foreign Minister Mohammed bin Abdulrahman Al Thani said in a tweet May 26. A few days earlier, Al Thani had met in the Qatari capital Doha with the political chief of the Palestinian Islamist movement Hamas, Ismail Haniyeh. At the same time, thousands gathered in front of the emirate’s national mosque in solidarity with the Palestinian cause amid Israeli airstrikes on the Gaza Strip.

But in the background of this decadeslong political proximity between Qatar and Palestine lies an intimate history, a family history that reserved Qatari society rarely tells.

“It fills me with pride to know that the country of which I am a citizen [Qatar] is a country that is on the right side of history,” said Shahad Younis. The young Qatari woman’s maternal and paternal grandparents were expelled from their homes in Palestine in the late 1940s and initially sought refuge in Lebanon before relocating to Qatar.

“I just watched this video of children jumping on a trampoline to the sound of bombs. This is their normal life, and it could have been mine,” Younis told Al-Monitor.

“My grandmother and I are able to turn off the TV and switch off our phones and go to sleep safely and comfortably. But this nightmare is the Palestinian reality,” added Haya Abu Issa, a Qatari citizen of Palestinian descent whose grandfather fled to the Gulf emirate in 1948. Issa’s family members long carried Jordanian passports before becoming nationalized in 2005.

Younis said she experiences a mix of feelings. “I am very grateful to live in Qatar, but there is also this feeling of borderline guilt, a frustration that what is happening in Palestine is out of our hands.” The May conflict killed over 250 Palestinians, and half of the young people in the enclave could be in need of psychological support.

The term “survivor’s guilt” applies to Palestinians in exile who “feel guilty that they managed to get out of Palestine, while the rest of their people are suffering," Issa told Al-Monitor.

These families, now officially part of the confidential Qatari society that has only about 300,000 citizens, remain firmly attached to their roots. “Although I was born and raised in Qatar, and I am Qatari at heart, I never felt separated from my Palestinian roots. I have kept my Palestinian dialect, my family still cooks traditional Palestinian dishes,” Issa said. Given close Qatar-Palestine ties, she said, “I never felt like the two parts of my identity clashed.”

But this dual identity was more difficult to grasp for Younis, who long introduced herself as Palestinian. She would wonder why at home the family speaks the Palestinian dialect, unlike other Qatari households. “I just thought I am Palestinian, not even Qatari,” she said.

As Younis turned 14 and started to attend more Qatari social events, she came to realize the “privileged position” of calling herself “a Qatari and a Palestinian." Questions asked by her Qatari friends and classmates — such as “What are you doing here, aren’t you Palestinian?” — forced her to reexplain her identity. “Technically I am Qatari, but I am also Palestinian," she said.

The integration of those of Palestinian descent into Qatari society is a source of debate for some Qataris, who fear it could impact local traditions, change the conservative emirate’s social fabric and squander national resources. The question is also deemed contentious because of the lack of transparency and secrecy surrounding Qatar’s naturalization process.

A Qatari of Palestinian descent told Al-Monitor some families “do not even like” to disclose that they are originally from Palestine as they “make a lot of the Qatari nationality."

“That other identity [Palestinian] prevents them from being fully accepted within Qatari society because they do not belong to the other groups, the tribal groups, they are not part of the historical social fabric,” said James Onley, director of historical research at Qatar National Library. He told Al-Monitor what constitutes being Qatari is a “recent nationalist construct” centered on the Arab Bedouin identity. “There is this huge pressure to conform."

The arrival of Palestinians in Qatar after the 1948 Arab-Israeli War — during which 700,000 Palestinians were displaced — also coincided with an “Arab awakening” in the emirate and the Gulf. Before the 1950s, the region was “oriented towards the Indian Ocean," Onley said.

In a 1957 annual report, the director of the British Council in Kuwait wrote, “Five years ago events in distant Egypt would have been of only secondary importance; the change is explained by the wide-spread acceptance in all classes of the ideals of Arab nationalism.”

During his exile to Qatar during the late 1950s,  Mahmoud Abbas — now president of the Palestinian Authority — co-founded the Palestinian organization Fatah with Yasser Arafat. The youngest of Abbas' three sons, Tareq Abbas, was born in 1986 in Qatar.

Umm Ahmed is a Qatari in her 60s. Her parents, who belonged to a prominent family in Palestine, relocated to Qatar about a decade after they were displaced during the 1948 war. When Umm Ahmed joined the Qatari public school system in the early 1960s, the tiny Gulf emirate that then had about 50,000 people was hoping recent discoveries of oil deposits could revive the economy three decades after the introduction of cultured pearls had decimated its pearling industry.

The small community-centered Qatari society welcomed well-educated Palestinians who fled Palestine and granted them residence permits, jobs and social services, Umm Ahmed said. However, citizenship remained out of reach for most as the country, which now has about 2.9 million people, has no formal path to citizenship.

“I was born in Qatar but became a Qatari because my husband is a Qatari," she said.

Umm Ahmed told Al-Monitor the Qatari education system played a central role in instilling an attachment to the Palestinian cause among Qataris. She recalled her school days in Qatar when pupils had to say “Long live Palestine” every morning before class began. “This is how Qatar supported Palestinians, by ensuring that Palestine is part of your life," she said.

"No one is holding them accountable"

A cease-fire between Israel and Hamas began May 21 after 11 days of fighting. But as everyone celebrated in Qatar, Issa said she was “unable to feel” the joy. “Too much damage has been done, not only in the past two weeks but for the past seven decades," she said, adding, “The cease-fire does not have retroactive effect; it will not reverse the damage.”

During her youth, Issa’s parents depicted Palestine as a beautiful country that Israel “really wanted” for its green areas, coastline and four seasons. “In my young mind, Palestine was absolutely gorgeous. That image is now tainted by the devastating reality," she said.

Issa chose to turn this “strong injustice” into a career path and recently became a lawyer after graduating from the Edinburgh Law School in the United Kingdom. “I hope that one day I will be able to make a significant change for my people in Palestine,” she said, noting that Israel violated “over 50” international laws and “no one is holding them accountable."

Human Rights Watch has accused Israel of "apartheid", methodically privileging Jewish Israelis and discriminating against Palestinians. An April Human Rights Watch report wrote that Israeli authorities “refuse to permit the more than 700,000 Palestinians who fled or were expelled in 1948, and their descendants, to return to Israel or the Occupied Palestinian Territory."

“It is insane how a large portion of the world is just turning a blind eye," Younis said.

Bahrain and the United Arab Emirates inked US-mediated normalization deals with Israel in September 2020. Qatar resisted normalization and reiterated support for a two-state solution. The Qatari foreign minister said in December, “Right now, I don’t see that normalization of Qatar and Israel is going to add value to the Palestinian people."

Palestinians may feel “betrayed” by normalization deals with Israel, but the reality is that national interest-driven policies are replacing the concept of Arab unity over certain issues, such as Palestine, Onley said. “Clearly the Saudis, Bahrainis and Emiratis are tired of Arab nationalism and are distancing themselves from it,” he said.

“Those governments are materialistic, they want to get advantages, but at the end of the day, the Israeli government will take advantage and kick them away,” Umm Ahmed said.

Seated next to her youngest daughter in the family house in Doha, she reaffirms her loyalty to the emirate. “Qatar is my home, Qatar is very important for me, Qatar saved my life and treated my parents with dignity,” Umm Ahmed said. “In my heart, I am a Qatari, and I am a Palestinian.”