The defendants were part of a mass trial of supporters of former President Mohammed Morsi and the Muslim Brotherhood. 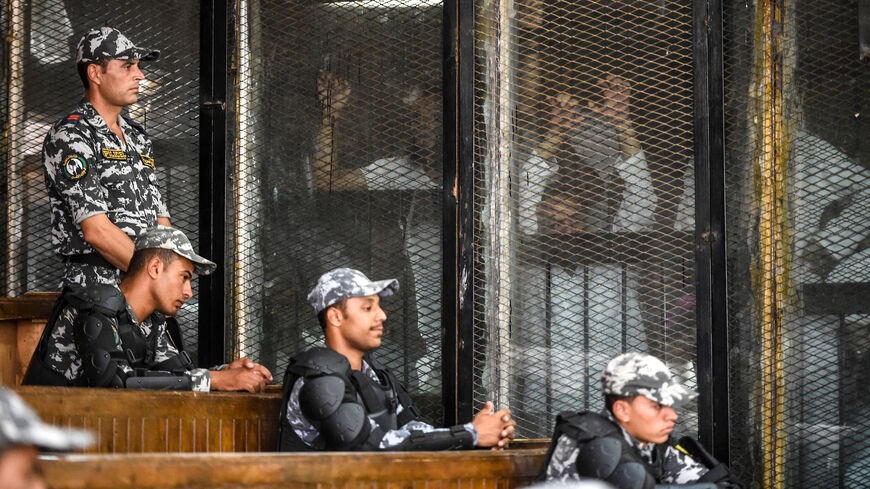 Members of Egypt's banned Muslim Brotherhood are seen inside a glass dock during their trial in the capital, Cairo, on July 28, 2018. - KHALED DESOUKI/AFP via Getty Images

An Egyptian court on Monday upheld the death sentences of 12 Muslim Brotherhood figures as part of a mass trial of hundreds charged in anti-government demonstrations in 2013.

After the military’s overthrow of Egypt’s first democratically elected president, Mohammed Morsi, his Muslim Brotherhood-aligned supporters staged sit-ins at Cairo’s Rabaa and al-Nadha squares. Egyptian security forces in August 2013 opened fire on the protesters to disperse the crowds, killing at least 900 people and wounding thousands, according to Amnesty International.

In 2018, an Egyptian court sentenced 75 Morsi supporters to death in what rights groups said was a grossly unfair trial of 739 people alleged to have participated in the sit-ins. The rest of the defendants, including Morsi’s son, were issued prison sentences.

The Muslim Brotherhood, of which Morsi was a key figure, is considered a terrorist organization by Egypt’s current government led by President Abdel Fattah al-Sisi. Morsi, who had been in detention since his ouster, died after collapsing during a court appearance in 2019.

Brotherhood politician Mohamed el-Beltagy and Salafi preacher Safwat Hegazy were among those whose death sentences were upheld on Monday by the the Court of Cassation. Citing an unnamed judicial source, AFP reports that the court reduced sentences for 31 Brotherhood members.

Philip Luther, Amnesty International's research and advocacy director for the Middle East and North Africa, called the upheld death penalties “a stain on the reputation of Egypt’s highest appeals court” that “cast a dark shadow over the country’s entire justice system.”

Luther called for Egypt to “immediately establish an official moratorium on executions” and to take steps to hold the perpetrators of the 2013 massacre to account.

The North African country in 2020 tripled its number of yearly executions, Amnesty International said. According to the rights group, at least 51 people have been executed in Egypt so far this year.