Egypt is advancing a number of projects to address the water scarcity problem, at a time that tensions between Cairo and Addis Ababa are on the rise over the failure to reach an agreement on the operation and filling of Ethiopia’s controversial dam on the Blue Nile. 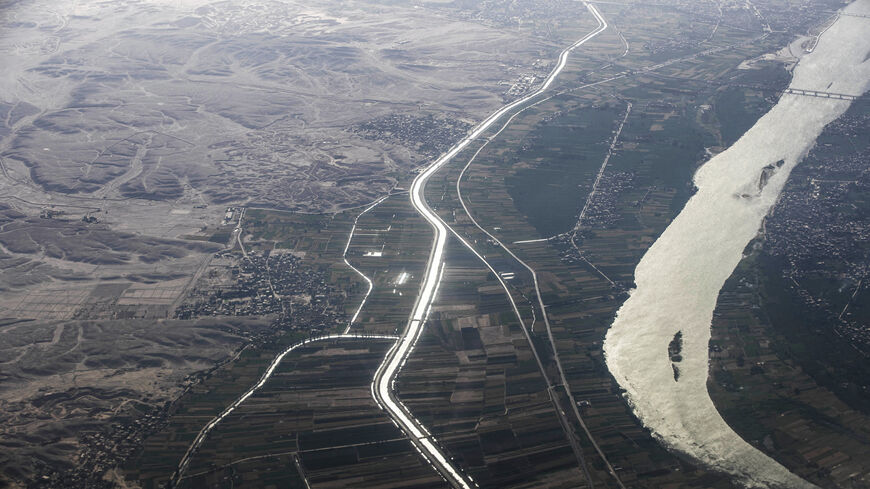 This picture shows an aerial view of the Nile River passing by the countryside north (bottom) of the southern city of Qena, Egypt, April 10, 2021. - Khaled Desouki/AFP via Getty Images

Egypt has started to take actions at various levels to address the water scarcity problem the country is facing.

In an interview with TeN TV June 5, Mohamed Ghanem, spokesman for the Ministry of Irrigation and Water Resources, said that the Egyptian state is facing major challenges in the water sector, given the limited water resources that do not exceed 55 billion cubic meters — consisting of Egypt’s share of the Nile water, in addition to a small amount of rainwater and groundwater. He explained that Egypt’s needs amount to 114 billion cubic meters, warning that Egypt suffers from water scarcity that requires major measures to overcome the challenges.

He noted that the state has recently taken action at four different levels to address the water scarcity crisis, including the implementation of a project for the rehabilitation of water canals and the rehabilitation of water drains. The two other projects consist of promoting the use of modern irrigation systems and smart irrigation systems in agricultural lands, to ensure an optimal management of water resources and supply farmers with the required amount of water.

Ghanem continued that such steps would contribute to an optimization of water consumption and maximization of return of water units, while reducing the initial cost for the farmers and maximizing crop productivity by 30%-40%. He indicated that there are other projects, including the wastewater treatment plants, as well as flood control and rainwater harvesting projects. Some 1,800-kilometer (1,118-mile) long canals have been rehabilitated so far as part of the rehabilitation and lining project, he said.

Ghanem’s statements came at a time that tensions between Egypt and Ethiopia are escalating, especially after Ethiopian Prime Minister Abiy Ahmed said May 31 that his country will build more than 100 small and medium dams in the new fiscal year in different parts of the country. The Egyptian Foreign Ministry responded in a statement saying that such an announcement “reveals once again Ethiopia's bad intentions when it comes to dealing with the Nile River and other international rivers that it shares with neighboring countries, as if they were its own, subject to its sovereignty and harnessed to serve its own interests.”

On June 6, former Egyptian Foreign Minister Nabil Fahmy told a local TV channel that the course of the events points to an inevitable clash between Egypt and Sudan on the one hand, and Ethiopia on the other.

Speaking to Al-Monitor by phone, Ghanem revealed details about Egypt’s response to the water scarcity problem, the repercussions of the Grand Ethiopian Renaissance Dam (GERD) and the challenges facing Egypt in this field. He explained that Egypt has built and continues to build dams in cooperation with the Nile Basin countries. He added that the Egyptian authorities are against any unilateral action taken by any of the upstream countries without taking into account the interests of the downstream countries.

He affirmed that Egypt insists on reaching a binding legal agreement on the GERD filling and operation, and opposes any unilateral measures that would harm the interests of Sudan and its own.

Commenting on the challenges facing Egypt in the water sector in light of the poor water resources, he explained that the rapid population growth, in addition to severe climate changes, including increased temperatures and the rise in the Red Sea water level, consist of a major threat to the Nile Delta. He explained that 97% of Egypt's renewable water resources come from outside its borders, which prompted the state to take many measures and policies to increase water productivity and efficiency.

Alaa Zawahiri, a member of Egypt's technical committee for the GERD negotiations, told Al-Monitor that Ethiopia, Egypt and Sudan must reach an agreement on how to manage the GERD after the completion of the dam’s construction, and on the amount of water Ethiopia will release from the dam during periods of drought, to prevent water shortage in Egypt or Sudan.

He explained that Egypt faces the threat of a shortage of water flowing from the Nile River in the next few years. He warned that drying up the middle section of the GERD from which water flows in order for Ethiopia to embark on the elevation works required for the second stage of filling will significantly affect Egypt and Sudan.

Zawahiri stated that Ethiopia’s unilateral move to initiate the second filling of the GERD in July and August will reduce the water share supplied to Egypt from 22 billion cubic meters to only 2 billion cubic meters. He added that Egypt and Sudan seek a clear and binding agreement on the GERD’s filling and operation and on how to deal with droughts, with the aim to secure the needed flow of water for generations and for decades to come.