Egyptian prosecutors called smuggling a "crime" against the Egyptian people and thanked their French counterparts for their cooperation. 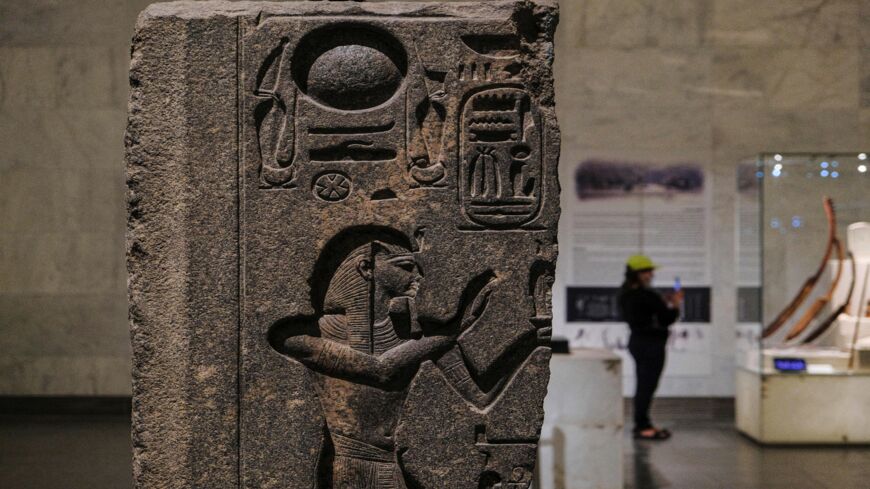 A visitor uses her phone to take a picture of artifacts near a relief dating to the reign of the ancient Egyptian 20th dynasty Pharaoh Ramases III (1184-1053 BC), on display at the new National Museum of Egyptian Civilization (NMEC) in the district of Fustat of Egypt's capital, Cairo, on May 26, 2021. - AMIR MAKAR/AFP via Getty Images

Egypt received 114 artifacts from France on Wednesday that had been smuggled out of the country.

“The crime of smuggling artifacts is one of the crimes which befalls all the Egyptian people,” the Egyptian Public Prosecution said in a statement.

The Egyptian government received the ancient artifacts at their embassy in Paris. Egyptian and French legal authorities worked together to recover them and stop them from being auctioned, the Egyptian state-owned Al-Ahram news outlet reported.

The artifacts are from different periods in ancient Egypt and include pottery pieces and sculptures depicting pharaohs and mummies, as well as Egyptian gods, according to a video that accompanied the Egyptian Public Prosecution statement. The Egyptian prosecutors also thanked French legal authorities for their help and spoke highly of Franco-Egyptian relations.

The repatriation of artifacts is an important issue in Egypt. The Egyptian government has a department dedicated to antiquities, and treasures from ancient Egypt are displayed in museums in the country. This is not the first time Egypt has successfully retreived its artifacts from abroad. Last year, Egypt repatriated 5,000 objects from a Christian museum in the United States.