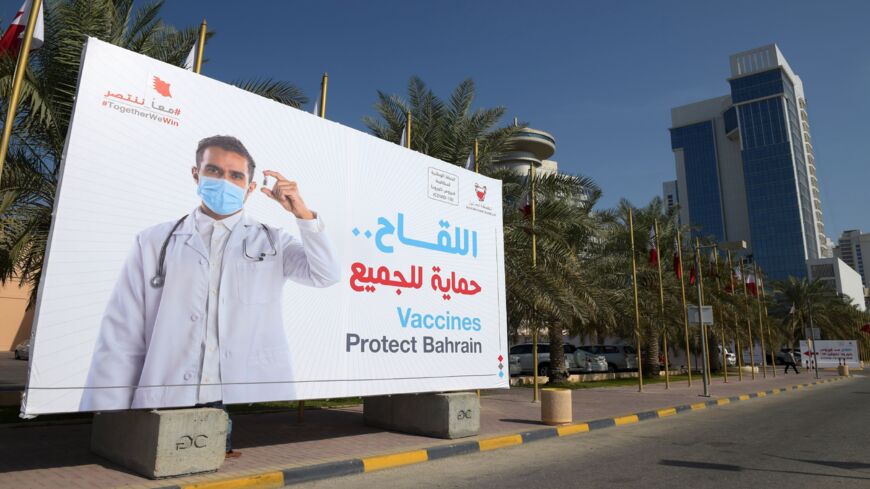 A large billboard carries a message encouraging people to take part in a voluntary free vaccination campaign against COVID-19 outside the Bahrain International Exhibition and Convention Center in the capital, Manama, on Dec. 24, 2020. - MAZEN MAHDI/AFP via Getty Images

The death of a prisoner from the coronavirus in Bahrain has triggered protests in the Gulf kingdom.

Husain Barakat died on Wednesday after succumbing to COVID-19. The 48-year-old political prisoner had been on a respirator and died in the hospital. Barakat had been fully vaccinated against the virus via China’s Sinopharm vaccine. Protests broke out in the town of Diah on the island, as people blamed the government for his death, The Associated Press reported.

Barakat was sentenced to life in prison in 2018 after being found guilty of belonging to a militant Shiite Muslim organization, according to the AP. He contracted the virus while serving his time in Bahrain’s Jau prison. A virus outbreak began there in March, prompting families of the incarcerated to protest for political prisoners’ release, according to Al Jazeera.

Bahrain experienced anti-government protests in 2011 during the Arab Spring. There is some sectarian division in the country, as the royal family are Sunni Muslims while most of the population consists of Shiite Muslims. The Bahraini government is often accused of carrying out human rights abuses, including in response to dissent and protests. The Bahraini government sometimes accuses Iran, which also has a majority Shiite population, of plotting against the kingdom.

Bahrain is currently registering more than 1,000 virus cases a day after reaching a historic high of more than 3,200 infections on May 29, according to Worldometer.

More than 50% of the Bahraini population has been vaccinated against COVID-19, according to Our World in Data. Bahraini officials told the AP last week that 90% of the new cases are people who opted not to be vaccinated.

Both Bahrain and its Gulf ally the United Arab Emirates have appeared to question the effectiveness of China’s Sinopharm vaccine, which was widely administered in both states. Last week, the two countries offered a booster from the American-German Pfizer-BioNTech vaccine to people who previously receive the Sinopharm shot.

On Wednesday, Bahrain’s Ministry of Health released findings on the use of Russia’s Sputnik V vaccine in the country. The ministry concluded that the vaccine has no serious health complications and is effective at preventing major illness from COVID-19.