Hamas’ popularity has risen sharply, but this doesn’t help them much with the outside world. An understanding with Fatah is key to any potential role in regional diplomacy. 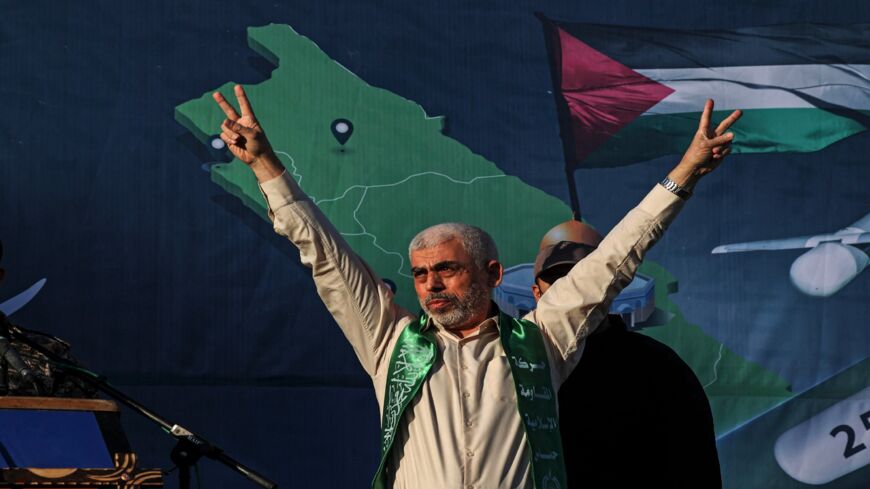 Yahya Sinwar, leader of the Palestinian Hamas movement, gestures on stage during a rally in Gaza City on May 24, 2021. A cease-fire was reached late last week after 11 days of deadly violence between Israel and the Hamas movement, which runs Gaza, stopping Israel's devastating bombardment on the overcrowded Palestinian coastal enclave. - MAHMUD HAMS/AFP via Getty Images)

If the relationship between the PLO and Hamas was on shaky grounds after President Mahmoud Abbas canceled the legislative elections, they are surely on shakier grounds after the announcement of the cease-fire between Israel and the Gaza-based Islamic movement.

National unity began on a high note this year with the Jan. 15 presidential election decree. That was made possible due to the September 2020 Istanbul meeting between Fatah and Hamas.

Fatah’s secretary, Jibril Rajoub, reached a tentative agreement with the No. 2 in Hamas, Salah Aruri, that led to the presidential decrees for elections.

What was not mentioned in the public agreements was an understanding between Rajoub and Aruri that Fatah and Hamas will agree on a joint list in which Fatah will have a slight majority and the speakership (most likely for Rajoub) and that Hamas will not challenge Abbas for the presidency.

That understanding fell apart when the grassroots of both movements totally rejected it and a schism within Fatah allowed for Nasser al-Qidwa to create an alternative list that made a commitment to support imprisoned Fatah leader Marwan Barghouti for president.

Despite this hiccup, Abbas sent on May 7 one of his top aides, Hussein al-Sheikh, to Qatar to try and use their good offices to reach an agreement on a national unity government regardless of the postponement of the legislative elections.

Al-Monitor has learned that Abbas’ envoy placed three conditions on Hamas: accept the conditions of the quartet (the European Union, the United Nations, the United States and Russia); accept previously signed agreements by the PLO (i.e., the Oslo Accords and other agreements); and commit not to use rockets against Israel.

Although technically Hamas appears to have come close to the conditions set by Abbas, Al-Monitor journalistic sources close to both Fatah and Hamas say Hamas felt those conditions were too steep. This of course was before the current situation that included the exchange of attacks between Israel and Hamas and the cease-fire.

Hamas and others feel that they have come out of those violent 11 days victorious. Simply rubbing Israel’s nose in the ground, paralyzing their main airports, forcing Tel Aviv and west Jerusalem residents into shelters, and pounding southern Israeli cities were unprecedented.

Although the attacks will not have a military advantage, they showed courage and willingness to exact a high price. And as a result, Hamas is now in a victory mode, and whatever they might have been willing to accept before is probably off the table now.

For Fatah and the Palestinian government, the situation is dire, although not totally lost. Despite the bad public support that Abbas has from ordinary Palestinians, the international community still considers him the legitimate representative of the Palestinians. Hamas’ current ecstasy will not last long, and they will need to cooperate with Ramallah if they want to benefit from the current world interest for Palestine.

One of the things Hamas badly needs is legitimacy. Israel and the United States insist the last conflict was between Israel and Hamas and not Israel and Palestinians. A one-page ad in The New York Times May 22 attacked a number of US celebrities for supporting Palestinians and said they supported an organization that wanted to annihilate Israel.

Legitimization of Hamas received support from a number of sources. The Los Angeles Times published an op-ed May 14 with the headline “Israel needs to talk to Hamas to stop the bloody conflict.” The issue has received support from other sources. Even the right-wing Israeli daily Jerusalem Post published on May 19 a column by Gershon Baskin with almost an identical headline reading “Israel must talk to Hamas to improve the situation.”

While Hamas badly needs and wants this legitimization, it also needs to have better relations with Ramallah in order to benefit from the large amounts of money that are being donated to help rebuild Gaza again.

The United States and the international community have pledged to support the rebuilding of Gaza, but these funds will surely not go through Hamas. Egypt has pledged $500 million, and a public fundraiser in Kuwait aiming to raise $100 million for Gaza netted $6 million in the first few hours of its launch.

The best and most likely scenario is for a national unity government that includes Hamas. Abbas will most likely try to get some type of green or yellow light from the United States and even Israel for such a government.

In order to do that, he needs to show a public commitment from Hamas that attempts to address the quartet conditions and commits to the popular struggle. With the popular support that Hamas has now after standing up to Israel, this might be a big order to fulfill. A lot depends on whether Hamas is willing to make the compromises and whether Abbas is willing to pursue national unity without necessarily fulfilling all of the Israeli and international conditions.