In cooperation with community associations and with masses of individual volunteers, the Gaza City municipality is leading a massive effort to clear the enclave of rubble left by the recent Israeli airstrikes. 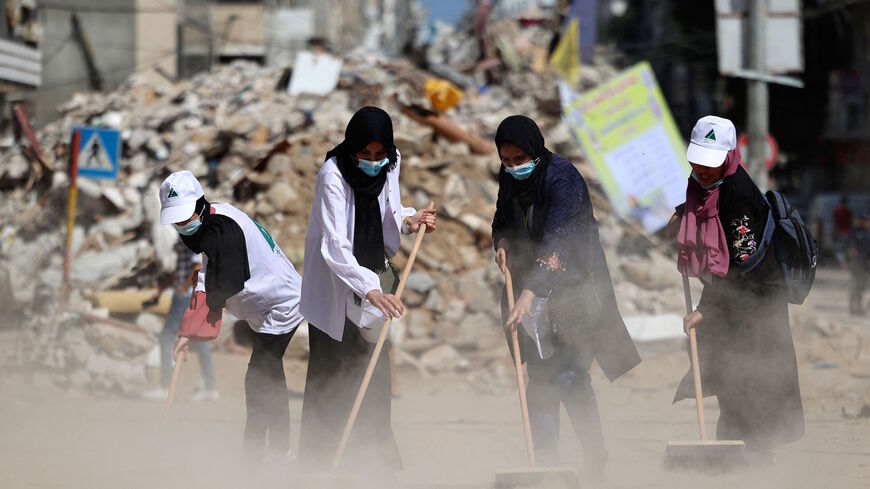 GAZA CITY, Gaza Strip — Thousands of volunteers are cleaning up the streets of Gaza City after Israeli airstrikes destroyed thousands of homes and facilities.

The Gaza City municipality's work program, called “We Will Rebuild It,” began May 23 and is set to continue for the week. So far it has cleared rubble from many homes and businesses and blocking public roads.

When the municipality announced the campaign over social media platforms, volunteers of all ages rushed to participate, bringing tools from their homes. The campaign later extended to all Palestinian cities and camps in the Gaza Strip.

Gaza City Mayor Yahya al-Sarraj told Al-Monitor that the effort, which began with 1,000 participants, cleared many of the main roads within hours.

Sarraj explained that the volunteers have contributed to alleviating a workload that would have overwhelmed municipal workers. He added that many official and community institutions joined the effort, freeing the  municipality's specialists to focus on repairing water and sewer lines and saving the city from environmental disaster.

Abd al-Salam Haniyeh, assistant secretary-general of the Supreme Council for Youth and Sports in Gaza, praised the participation of athletic and scouting groups in a May 25 statement, saying that the sport and scouting sector is seeking to expand its volunteer work and provide quality programs to serve the community and highlight the important role of sports in society

Gaza's Ministry of Public Works estimated the initial losses from the bombing of buildings, houses and government institutions at $350 million.

Ahmed Hijazi, a goodwill ambassador of the European Union in the Palestinian territories and one of the volunteers, told Al-Monitor that the effort had spread to all of Gaza's governorates within 48 hours of starting in Gaza City. He added that the teams were able to restore some roads and public parks in the central Gaza City neighborhood of Al-Rimal, where residential towers were heavily bombarded by Israeli jets.

With resources scarce due to the continued Israeli siege on the Gaza Strip, volunteers used often rudimentary means of transportation, particularly animal-drawn vehicles, to move the rubble.

Volunteer Muhammad Rumman told Al-Monitor that he took part to help to restore the beautiful image of Gaza City.

Rumman said that after the road clearing is over, he and other volunteers will paint some of the city's walls with peaceful imagery to beautify Gaza's streets.

Another volunteer, 17-year-old Hind Nassar, told Al-Monitor that she and her friends in Al-Rimal have been helping out together and noted that the effort has restored a sense of normalcy among the neighborhood's residents who have been terrified by the violent Israeli air strikes over the past few days.

Nassar said that the massive volunteer effort sends the message that Palestinians will overcome this disaster.

The Gaza Strip, which had not recovered from the effects of the previous Israeli wars in 2008, 2012 and 2014, will need several months to remove all the rubble of residential towers and houses.