As the Houthi rebels struggle to take Marib, Senator Chris Murphy says the time for peace is now. 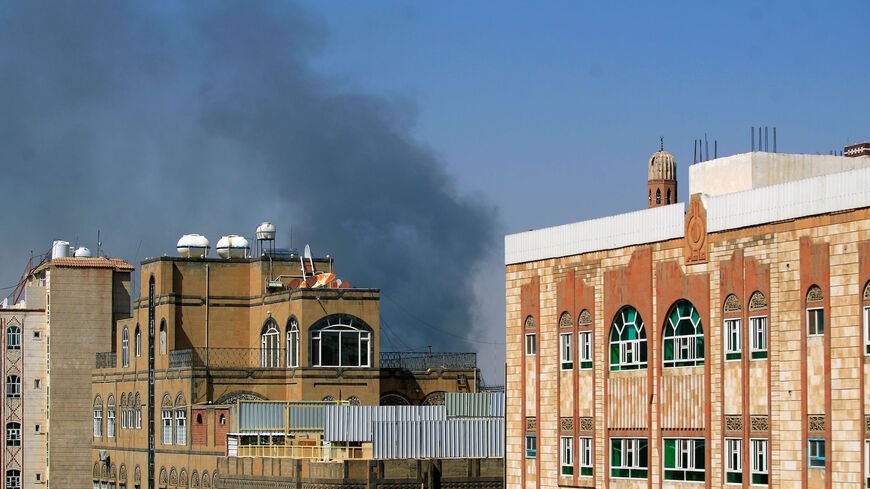 Smoke billows following a reported airstrike by the Saudi-led coalition in the Yemeni capital Sanaa, on March 7, 2021. - MOHAMMED HUWAIS/AFP via Getty Images

Yemen’s Houthi rebels did not take up an invitation to meet with UN Yemen envoy Martin Griffiths last week in Oman’s capital amid calls for a cease-fire, but the US administration isn’t discouraged.

“We have a cease-fire proposal on the table in Yemen,” US Senator Chris Murphy (D-CT) told reporters on Monday, adding, “It’s now time for the Houthis to do their part.”

The senator returned from a tour of the Middle East last week as part of a wider US delegation to the region.

Murphy, who heads the Middle East subcommittee on the Senate’s foreign relations panel, has pushed for years to end US involvement in Yemen’s civil war on the side of the Saudi-led coalition.

President Joe Biden has largely done so. Now the senator says it is “imperative” for the Iran-backed Houthi rebels to cooperate with a cease-fire proposed by Saudi Arabia in March and for Riyadh to commit to ending to its blockade of the Hodeida port and Sanaa airport so that aid can flow freely into the war-ravaged country.

“If those two things happen, we can get to a political process that could see a permanent end to the war,” Murphy explained.

“In Oman, we made clear to the sultan’s representatives that they need to take a tougher line with the Houthis,” he said, adding, “We made clear that it’s time for them to press the Houthis to declare a cease-fire.”

Yemen’s civil war has killed more than 100,000 people and is threatening to plunge the country into famine. A large majority of Yemen’s population already needs humanitarian assistance.

The US-backed Saudi-led intervention to restore the Yemeni government has failed to roll back the Zaidi Shiite rebels’ progress and has worsened the five-year conflict’s humanitarian catastrophe. Today, the war grinds on, now a main stage in the proxy conflict between Riyadh and Tehran, and, to some extent, in the standoff between the United States and Iran.

In Qatar, Murphy urged officials to contribute to the UN’s aid appeal for Yemen, which is only roughly one-third funded so far. “If we don’t make significant progress with respect to additional donor commitments, we’re going to see a famine” in Yemen, Murphy said.

The senator’s trip coincided with a broader diplomatic tour of the Middle East by US officials last week as the Biden administration seeks to end Yemen’s war and reenter the 2015 nuclear accord with Iran.

“I think that we’ve heard fairly consistently from countries in the Gulf that they would welcome a return to the Iran deal, because they see it as necessary to continue these early talks of a new regional security architecture,” Murphy told journalists.

Yet the lawmaker noted that reentering the Iran deal — which was abandoned by the Donald Trump administration in 2018 in favor of targeted sanctions against Iran — is not a prerequisite for peace in the Arabian Peninsula.

Murphy met with the US envoy for Yemen Timothy Lenderking, UN envoy Martin Griffiths and European ambassadors to Yemen in Amman. He also crossed paths with State Department Counselor Derek Chollet and White House Middle East coordinator Brett McGurk during that visit, where he and the administration officials met with King Abdullah.

Biden ordered a halt to US support for offensive operations by the Saudi-led coalition in Yemen shortly after taking office, but the senator says more work needs to be done to end the war.

The Houthis continue to press the attack for the government-held enclave of Marib, threatening a major displacement crisis on top of Yemen’s humanitarian disaster.

“I think as time goes on, the Houthis are realizing that they may not be able to take Marib and that the offer from the Saudis may not last forever,” Murphy said, offering a window into the Biden administration’s calculations.

Houthi assaults on the city’s outskirts have stalled, hampered by local tribal resistance and Saudi-led coalition airstrikes that cover the open ground between the nearby mountains and Marib to the east.

“I think this is the moment for a cease-fire, and we are hopeful that the Omanis will deliver that message to the Houthis,” Murphy said, adding that the United States has offered to play a role in future negotiations.

“The ball is really in their court, and the Houthis — if they persist with this offensive — will have to answer to the world for the humanitarian catastrophe that will be created.”