Clashes took place between Palestinians and Israeli police in the Al-Aqsa Mosque compound, but the cease-fire between Israel and Hamas was still holding. 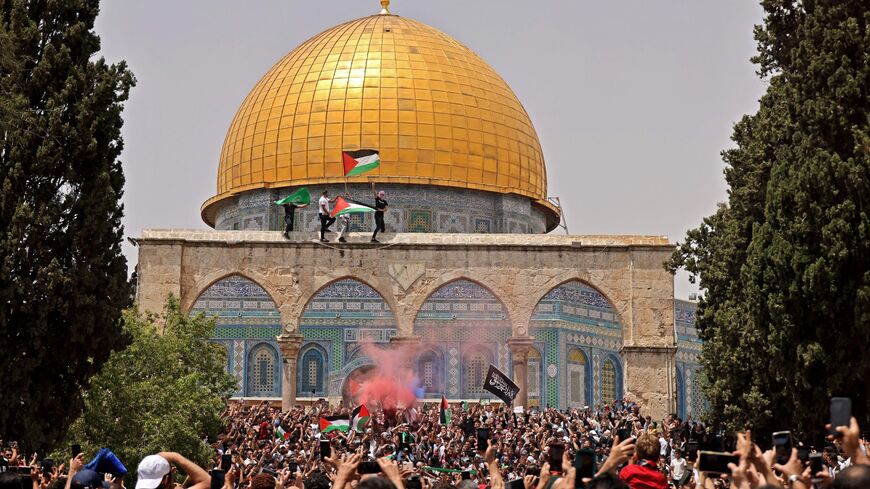 Palestinian Muslim worshippers wave the Palestinian and the Hamas flag during clashes with Israeli security forces in Jerusalem's Al-Aqsa Mosque compound, the third holiest site of Islam, on May 21, 2021. - AHMAD GHARABLI/AFP via Getty Images

Israeli police raided the Temple Mount, also known as the Haram al-Sharif, in Jerusalem on Friday. The recent cease-fire between Israel and Hamas was holding despite the clashes at the sensitive religious site.

The Israeli police said that they intervened to put down a riot where people were throwing rocks and Molotov cocktails at security forces, according to The Times of Israel.

A cease-fire between the Israeli military and the Palestinian military organization Hamas in Gaza went into effect early Friday morning following 11 days of intense fighting. The war between the two erupted in part because of tensions on the Temple Mount.

The complex includes the Al-Aqsa Mosque where Muslims believe the Prophet Muhammad ascended to heaven. The area also is the single holiest site in Judaism because it is where the Second Temple stood. The last remnant of this temple — the Western Wall — is below the mosque. Jews and Christians also believe Abraham attempted to sacrifice Isaac there. Muslims believe it is where he tried to sacrifice his other son — Ishmael.