Jerusalem has returned to the center of the Palestinian-Israeli conflict with riots in the contested city. 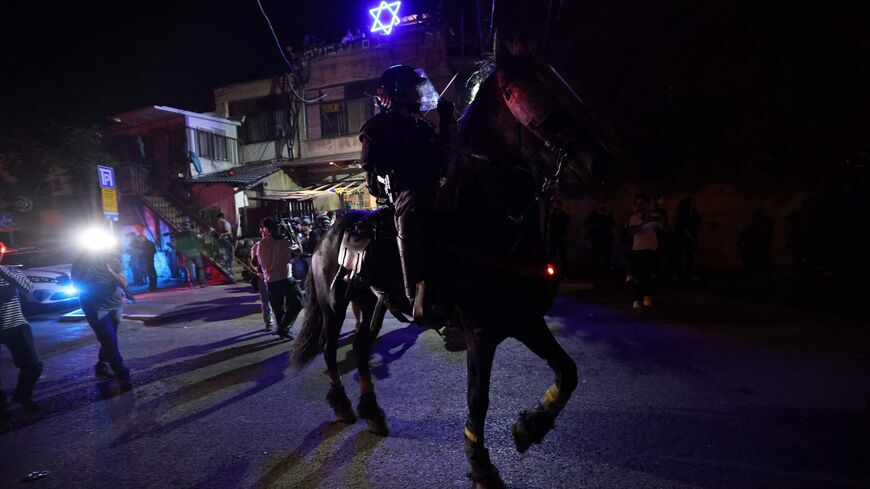 Mounted Israeli riot police charge Palestinian protesters in front of an Israeli settler's house during a demonstration as Palestinian families face eviction, part of an ongoing effort by Jewish Israelis to take control of homes in the Sheikh Jarrah neighborhood of occupied east Jerusalem, on May 5, 2021. - EMMANUEL DUNAND/AFP via Getty Images

The city of Jerusalem has once again found itself at the center of the Palestinian-Israeli conflict.

Palestinian President Mahmoud Abbas cited Jerusalem as his reasoning for postponing the long-awaited legislative elections. Of all eligible Palestinians living in the West Bank and Gaza, 93% had registered to vote and 36 lists had to produce 3,000 signatures and post $20,000 in registration fees (at least $10,000 of which is not returnable) to compete in the contest.

Regardless of whether one questions Abbas’ justification, that he singled out Jerusalem as the main issue has prompted both his supporters and his critics to scramble to show that they support east Jerusalem and oppose Israeli efforts to Judaize it.

The struggle to save dozens of Palestinian families in the Sheikh Jarrah neighborhood from eviction took center stage with daily protests, in which Israeli peace activists were also involved. The Palestinian Foreign Ministry got involved, submitting a complaint to the International Criminal Court about Israel replacing indigenous Palestinians with Jewish settlers in direct violation of international law, including the 2017 UN Security Council Resolution 2334. Acts of solidarity have included daily local vigils and protests and a wide-ranging international campaign to support the Palestinian residents, most of them refugees from the 1948 war.

The troubles in the old city began on the first day of Ramadan, April 13, which coincided with the Israeli Remembrance Day for fallen soldiers. The day is normally marked by a solemn event at the Western Wall adjacent to the Al-Aqsa Mosque. Israel’s president, military chief of staff and other senior dignitaries were in attendance.

Palestinian Muslim worshipers gathered at Al-Aqsa Mosque for evening prayers, calls to which are broadcast electronically with high-powered loudspeakers.

But the four minarets around Al-Aqsa were silent on the first day of the holy month of Ramadan. Without a warrant or any other legal justification, Israeli security forces broke into them and cut the wiring to the speakers. The act of sabotage triggered angry protests.

The Israeli police had also unilaterally decided this year to close off the Damascus Gate plaza and steps, which normally offer a badly needed open space for Palestinians in east Jerusalem to relax and to enjoy the post-fast Ramadan evenings.

Thousands of Palestinians throughout east Jerusalem demonstrated, throwing stones and clashing at night. Israeli police recovered in the daytime, when the fasting Palestinians were asleep or relaxing.

Making matters worse, members of the far-right racist Jewish group Lehava (which means "fire" in Hebrew) marched toward the old city of Jerusalem chanting violent slogans like “death to Arabs.” Israeli sources say that the extremists were angered by a TikTok video that showed Palestinians beating up an Orthodox Jewish man even though it also shows Palestinians helping the victim.

Israeli police didn’t stop the protesters and the Palestinians say they were forced to defend themselves against the much smaller group.

East Jerusalem's the small Christian community also received its share of discrimination. Palestinians wishing to attend the Holy Fire ceremonies according to the Orthodox Julian calendar on May 1 were surprised to see all the entrances to the Old City blocked.

Israeli police said that the restrictions were due to fears of overcrowding due to COVID-19 and worries of another stampede. A day earlier, 45 Hassidic Jews died at a ceremony for a second-century Jewish rabbi that took place in the north of Israel. Though the crowd was small, the police used force to disperse it, leading to more clashes. Christian leaders and the government of Jordan complained to the Israeli police about the violation of freedom of worship.

The city, which is technically united but in practical terms more divided than ever, remains a source of frustration and anger in the long-simmering Palestinian-Israeli conflict.

By the time the US administration finalizes its Middle East team and strategy and a stable government is formed in Israel, the parties to the conflict will find an emotionally drained society in Jerusalem that will be unlikely to accept compromises.