Israel, after saying ground troops were attacking in the Gaza Strip on Friday, later said the forces, while involved in strikes against the enclave, were not inside the strip. 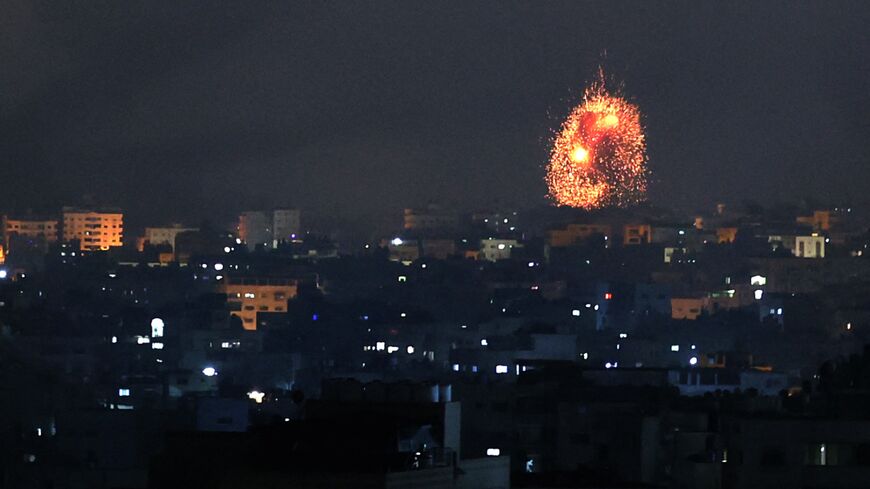 An explosion lights the sky following an Israeli airstrike on Beit Lahia in the northern Gaza Strip on May 14, 2021. - MOHAMMED ABED/AFP via Getty Images

The Israeli military is now using ground troops in its operations against the Gaza Strip.

The Israel Defense Forces (IDF) announced just after midnight Friday that its “air and ground troops are currently attacking in the Gaza Strip.”

The IDF later said, “There are currently no IDF ground troops inside the Gaza strip. IDF air and ground forces are carrying out strikes on targets in the Gaza strip,” the Times of Israel reported.

Israel deployed troops near the Gaza border Thursday and called up 9,000 reserve soldiers for active duty.

Hamas said it was open to a conditional cease-fire Wednesday, but Israel rejected this. Egyptian efforts to broker a truce Thursday have also not yielded any results yet.

“I said that we would exact a very heavy price from Hamas and the other terrorist organizations,” said Netanyahu.

The present conflict began this week amid tensions in Jerusalem. There has also been widespread communal violence in Israeli cities between Jews and Arabs that continued Thursday night.

The Israel Defense Forces did not immediately comment further on the ground operation, and it is unclear if it amounts to a full-scale incursion into Gaza. Rockets from the strip into Israel were also continuing to be fired.

A Hamas spokesman said Thursday that it would respond forcefully to any Israeli attack by land.

“Any ground invasion on any part of the Gaza Strip will be, by God, an opportunity for us to increase our killing and capturing of the enemy,” the spokesman said, according to the Hamas-affiliated Safa news outlet.