The commander of Iran's Islamic Revolutionary Guard Corps indirectly claimed responsibility for a series of attacks against Israeli interests, adding that it takes just one operation to "blow up" Israel. 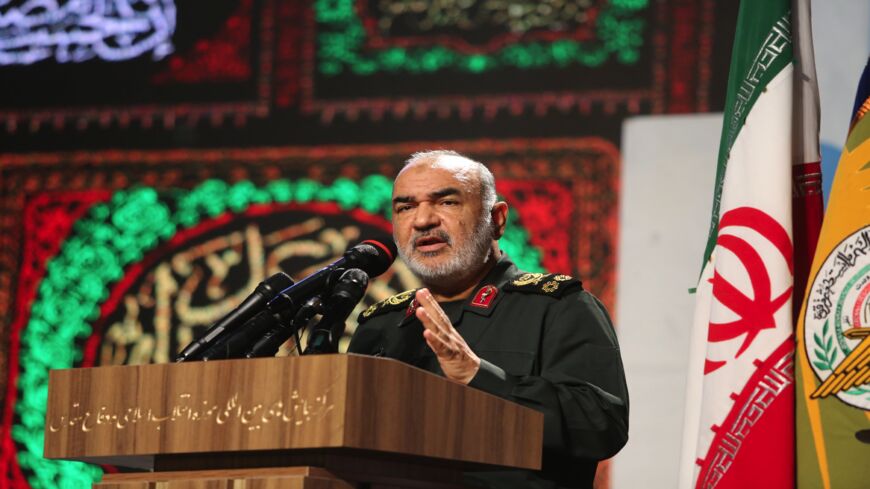 Iranian Revolutionary Guard Corps commander Maj. Gen. Hossein Salami at Tehran's Islamic Revolution and Holy Defense Museum during the unveiling of an exhibition of what Iran says are US and other drones captured in its territory, in the capital, Tehran, on Sept. 21, 2019. - ATTA KENARE/AFP via Getty Images

"Israel could be blown up in a single operation," said the commander of Iran's Islamic Revolutionary Guard Corps, Maj. Gen. Hossein Salami.

Known for his harsh anti-Israeli rhetoric, Salami downplayed the Jewish state's defenses as a security "bulb" that has been "burst" following a series of recent incidents. The Iranian commander enumerated Israel's "vulnerabilities" in "domino-style" attacks, for which he suggested the Islamic Republic's responsibility.

Salami referred to a powerful explosion at an Israeli plant for advanced weapons April 21. Israeli media, however, have reported that the blast took place during a routine test and left no casualties. The general included in his list the explosion at a big refinery in the city of Haifa, which Israeli officials described as a "fire" that they quickly contained.

"Then their spies were killed in the [Kurdish] Iraqi city of Erbil," Salami added. Earlier this month, Iranian media reported that an attack targeted a center operated by Israel's external intelligence agency, Mossad. Kurdish officials dismissed the reports as "false." Salami's list of Israeli vulnerabilities also covered the Israeli air defense system's failure to detect a missile that fell near the Dimona nuclear facility April 22.

All those incidents occurred after Iran vowed revenge following an Israeli-blamed attack on its Natanz facility April 11. Amid the escalating tensions, the two sides have also taken their battle to the sea, every now and then targeting one another's vessels with explosions. In a clear reference to those frictions, Salami said, "It is very easy to inflict serious disruption on Israel's maritime trade."

The commander's statements came less than two days before International Quds Day, which Iran annually marks on the last Friday of the fasting month of Ramadan with the central theme of "death to Israel." As a fundamental tenet of the 1979 Revolution, hostility with Israel has played central to the ideology of the Islamic Republic. This has occasionally been formulated into controversial statements about the annihilation of Israel.

Salami's suggestion of an Iranian role in attacks on Israel was in line with previous threats by Supreme Leader Ayatollah Ali Khamenei, who is also the country's commander-in-chief. Khamenei has warned that Iran's missiles could reach Israeli territories and that Iran's prowess could "raze" the Israeli cities of Haifa and Tel Aviv to the very ground.