Iraqi security and coalition forces are increasingly concerned about the use of drones by armed factions against military bases and airports. 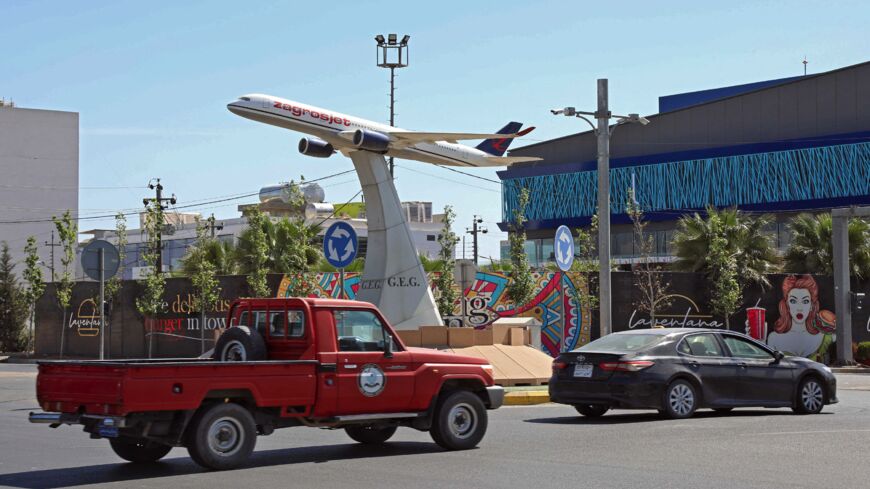 The model of an airplane of Iraqi Kurdish carrier "Zagrosjet" decorates the center of a roundabout near Erbil's International airport in the capital of Iraq's autonomous northern Kurdish region on April 15, 2021. An explosives-packed drone slammed into the Erbil airport late on April 14 in the first reported use of such a weapon against a base used by US-led coalition troops in the country, according to officials. It comes after around 20 bomb and rocket attacks blamed on pro-Iran Shiite armed groups against facilities used by coalition troops or diplomats in Iraq since US President Joe Biden took office in January. - SAFIN HAMED/AFP via Getty Images

During the recent Israel-Gaza conflict, Israeli Prime Minister Benjamin Netanyahu claimed that some of the drones flying over Israel had been sent from Iraq or Syria. Iraqi pro-Iran militias, many of them present in Syria as well, continuously threaten that they can attack Israel from Iraq.

An unmanned aerial surveillance system (UAS, or small drone) struck on May 8 Iraq’s Ain al-Asad Air Base in the western part of the country where US and other coalition forces are stationed, without causing injuries.

Speaking to Al-Monitor, a security source at the air base said the attack actually involved two drones. One was downed; it is unknown what happened to the second drone.

While fingers of accusation were pointed at the armed factions opposing the presence of US troops in Iraq, no faction has yet claimed responsibility for the attack. The armed factions have already conducted similar attacks in the past. In fact, armed militias claimed responsibility for attacks on Saudi Arabia in January and for an attack on Erbil International Airport in the Kurdistan Region of Iraq in April.

Fadel Abu Ragheef, a security analyst close to the Iraqi intelligence services, told Al-Monitor that “some of the armed groups that perceive the US troops’ presence as an occupation began resorting to a new mechanism and tactic in their operations. They are now carrying out drone attacks.”

Abu Ragheef said the use of drones as an alternative to Katyusha rockets would escalate security tensions in Iraq.

Al-Monitor published in August an analysis on the danger the movement of drones poses to Iraq, as does Iraqi authorities' failure to control and monitor their movement or to enact a law that would regulate or criminalize their use.

The risk drones pose to Iraqi security forces, the coalition and US forces has been ongoing for months. Ostensibly, this new mechanism serves an alternative to Katyusha rockets to attack military facilities, camps and bases in Iraq.

Lockheed Martin Corp., which supervises maintenance tasks on F-16 fighter jets at Balad Air Base, decided on May 8 to leave Iraq following repeated attacks against the base despite the Iraqi government’s efforts to convince the corporation to reverse its decision. Baghdad does not seem able to provide guarantees that the base will not be targeted in the future.

Back in April, when the drone struck Erbil International Airport, former Foreign Minister Hoshyar Zebari accused militias of standing behind the attack, in reference to the Popular Mobilization Units-affiliated groups.

Leaked information in 2019 revealed that the factions operated a drone above Iraqi President Barham Salih’s house and threatened him with his life due to his nomination as prime minister at the time. A few months later, a drone carrying locally manufactured bombs was found in al-Jadriyah neighborhood adjacent to the Green Zone area, which is home to government buildings, including the US Embassy.

It is believed that anti-US and anti-coalition armed factions in Iraq have begun resorting to drones to target their positions and facilities. Similarly, the Houthis in Yemen have repeatedly targeted Saudi oil facilities with Iranian-distributed attack drones.

He said the coalition and US Central Command share a concern in theater — counter-drone technology is a “top priority” for the coalition. The Compact Laser Weapons System (CLaWS), for instance, gives coalition forces a dynamic defense against drone attacks, he said.

Iraqi forces’ experience with drones has been harsh. As they fought against the Islamic State (IS) in Mosul in 2016-2017, IS relied on drone attacks against Iraqi forces, which killed many of their members. The use of drones was the most prominent challenge in the battle against IS in Mosul.

A government source told Al-Monitor, “We have information on the developments in terms of the armed factions’ use of drones in their attacks on military camps and bases. It is quite a dangerous development, to be honest, and a real challenge to our security forces.”

The source added, “Efforts are being deployed to de-escalate the situation with the armed factions, because it is not in anyone's interests to see increased drones attacks. These drones do not require elevated financial costs, which means they will be increasingly used in the future.”

There was information in February that drones were launched from the Iraq-Saudi Arabia border toward a royal palace in Riyadh. That in itself shows pro-Iran armed groups in Iraq have chosen this new mechanism, which ensures greater camouflage and target accuracy and greater protection for their members.

According to US officials, pro-Iran factions have in their possession Iranian-made CES-04 drones, which Houthis used in their attacks on Saudi Arabia.

The use of drones is another challenge to the Iraqi government after failing to control the spread of weapons. This aerial weapon can target any facility and conduct assassinations.

The Iraqi government will not be able to halt the movement of drones at the military and security levels. This is especially true since it does not have an aerial defense system and since it's only available option is to negotiate with those who have drones so as to prevent their use in the conflict.