Only one month out from Iran's presidential election, calls are growing for a boycott of the vote, widely seen as an undemocratic process with dim prospects of genuine change. 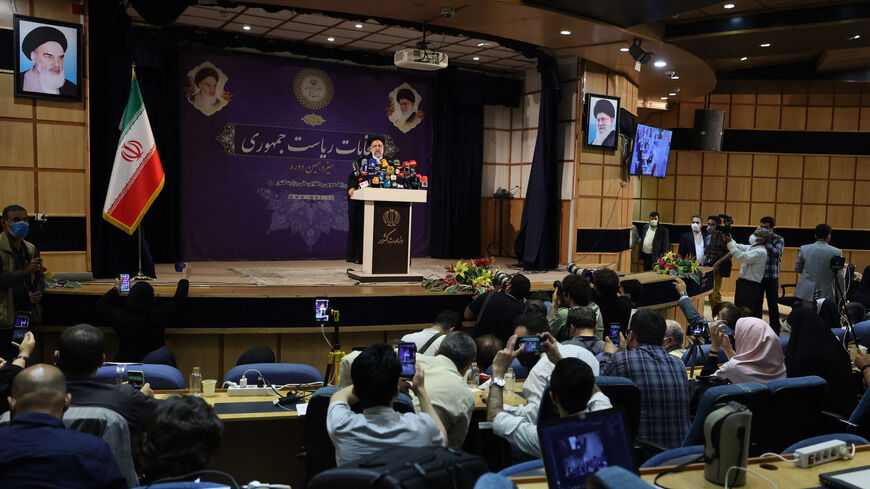 Iranian judiciary chief Ebrahim Raisi delivers a speech after registering his candidacy for Iran's presidential elections at the Interior Ministry in capital Tehran, May 15, 2021. - ATTA KENARE/AFP via Getty Images

Over 230 dissidents and civil society activists in Iran have called on fellow citizens to boycott the country's presidential election slated for June 18.

In an open letter addressing the Iranian nation, the signees described the election as little beyond a "formality." The activists demanded that Supreme Leader Ayatollah Ali Khamenei step down as the first stage in a peaceful transition from a system led by a cleric to a secular state compliant with the United Nations Charter. "Let's boycott the show election so that the unpopular establishment will not endure," the letter reads.

Expressing pride about their diversity, the dissidents said they represented a "rainbow" of political leanings and ethnicities from across Iran. Among the notables behind the letter are well-known former political prisoner Heshmatollah Tabarzadi, jailed journalist Mohammad Nourizad and teachers union activist Javad La'l-Mohammadi.

Last week, some 600 candidates registered for the key polls. Members of the hard-line Guardian Council, who are either directly or indirectly appointed by the supreme leader, are in charge of vetting the candidates, whose final list is due this week. Speculation is rife that the main battle will be waged between judiciary chief Ibrahim Raisi and former parliament speaker Ali Larijani.

Yet an expected low turnout continues to remain the key concern for the ruling elites. And to their dismay, calls for a boycott are reverberating across social media platforms. Iranians are debating what some say is an undemocratic electoral system not reflective of their will. Back in 2017, the country witnessed significant voter turnout as many middle-class Iranians found the competition between President Hassan Rouhani and Ibrahim Raisi to be a choice between the lesser of two evils.

This time around, however, the apathy seems to have soared to new levels. The hashtag "There is no way I will vote" is trending on Twitter with Iranians arguing that no matter what the state and the candidates promise, they will not be lured to the ballot box. They enumerate a long list of accumulated grievances from political restrictions to economic hardships, citing promises that previous administrations have failed to deliver.

Nevertheless, Iran's state television network and leading hard-line groups are pushing for participation. On May 18, the ultraconservative Society of Seminary Teachers of the holy city of Qom called on Iranians to vote. Recognizing the economy as the pressing issue at stake, the clerics told the public that a mass turnout will offer an "exit strategy" from the current economic difficulties.