The flurry of diplomacy over the Israeli-Palestinian escalation has helped Erdogan break his diplomatic isolation, but he could hardly hope for far-reaching gains to help his bid at fence-mending with Arab heavyweights. 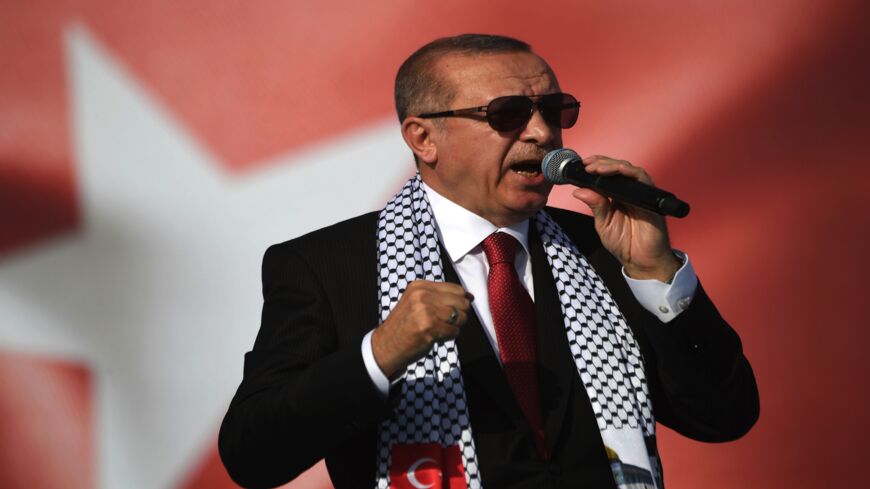 Turkish President Recep Tayyip Erdogan addresses a protest rally in Istanbul on May 18, 2018, against the killings of Palestinian protesters on the Gaza-Israel border and the US Embassy move to Jerusalem. - OZAN KOSE/AFP via Getty Images

The new Israeli-Palestinian flare-up, bursting out right in the midst of Turkey’s quest to mend ties with Israel and Arab rivals, has opened up space for Ankara to seek diplomatic influence in the region. But any gains it could make in the process are likely to be limited now that it has lost much of its leverage vis-a-vis Arab heavyweights and Israel.

The efficiency of Ankara’s diplomacy on the Palestinian question is open to argument, but the escalation in the Holy Land did help it break its diplomatic isolation to some extent.

President Recep Tayyip Erdogan has had a flurry of phone calls with regional leaders since the unrest erupted last week, urging “the world and Muslim nations in particular to take efficient action against Israel’s attacks on Al-Aqsa Mosque, Jerusalem and Palestinian homes.” Erdogan reasserted support for the Palestinians in calls with Palestinian President Mahmoud Abbas and Hamas leader Ismail Haniyeh. In a bid to mobilize international action against Israel, he spoke also to the presidents of Algeria, Indonesia and Russia, the king of Jordan, the emir of Kuwait and Pakistan’s prime minister.

Foreign Minister Mevlut Cavusoglu — who was on a fence-mending trip to Riyadh May 11-12 following the first high-level Turkish-Egyptian talks in eight years — had phone calls with his counterparts from Algeria, Iran, Morocco, Pakistan, Russia and Tunisia. Ankara, he said, is seeking to mobilize the Organization of Islamic Cooperation (OIC) and the UN General Assembly to respond to Israel’s actions.

An OIC statement May 11, issued after a meeting of the member states’ permanent representatives, called for a meeting of OIC foreign ministers, an emergency session of the UN General Assembly and an international force to protect Palestinian civilians, which, according to Turkey’s public broadcaster, were Turkish proposals.

Yet judging by Erdogan’s showing in previous Israeli-Palestinian crises, he seems to be underperforming this time. When the Donald Trump administration recognized Jerusalem as Israel’s capital in December 2017, Turkey was able to convene an OIC summit in Istanbul within a week to get a joint statement rejecting the decision. Turkey’s diplomatic efforts were instrumental also in the UN General Assembly’s adoption of a resolution that dismissed Washington’s recognition as “null and void” later that month.

Ankara’s current initiatives lack any aspect that could impact the course of the crisis, never mind that it is eager to give itself credit. According to Erdogan’s communication chief Fahrettin Altun, it was Erdogan’s efforts that managed “to draw the attention of all international organizations, especially the UN, and governments around the world to the state terror practiced by Israel.” Turkey, he added, “will not allow Palestine to be occupied step by step.”

Even in earlier years when Erdogan’s government was on good terms with Cairo and other Arab heavyweights, the way it advocated the Palestinian cause was often criticized as annoying in diplomatic circles. Many would emphasize that a Turkey with more balanced ties with Israel and the Palestinians would be more helpful in settling the conflict.

Erdogan has long lost any leverage to influence Israel, a former ally of Turkey, and his old Arab friends are not exactly dying to listen to his pro-Palestinian bluster. Ankara’s ability to influence Palestinian factions has not lived up to expectations either, despite its close ties with Hamas. Asked on Al-Jazeera whether anyone had contacted Hamas to stop its attacks on Israel, Fawzi Barhoum, a spokesman for the group, confirmed contacts with Turkey, Egypt and Qatar, but flatly rejected responsibility for the escalation, saying that “Israel is the problem.”

According to retired ambassador Omer Onhon, a former head of the Turkish Foreign Ministry’s Middle East department, the deterioration in Turkey’s ties with regional and other countries impairs its ability to influence settlement efforts on the Palestinian issue.

Speaking to Al-Monitor, Onhon recalled examples of how Turkey was able to contribute to peace efforts in the past, including in 2009 when Turkey played a “key role” in bringing an end to Israel’s war on the Gaza Strip and an ensuing cease-fire deal. “Unlike those days, our network of international relations is generally problematic today, which is a major obstacle to efficiently using our advantages in efforts for peace and stability,” he said. To regain its clout, Turkey needs to iron out the problems in its foreign relations as much as possible, maintain “at least decent ties” with all regional countries and “build up trust in its interlocutors that it does not have a different or ideological agenda behind the curtain,” he added.

With the latest crisis, Turkey’s bid at normalization with Israel appears back in the freezer. Ankara this week retracted an invitation to Israel’s energy minister to attend a diplomatic forum in Turkey in June, dampening expectations that the two countries might reappoint ambassadors soon. Al-Monitor reported in November that Turkey’s intelligence chief had been holding secret talks with Israeli officials in a bid to fix bilateral ties. Ankara’s change of heart was seen also as an effort to win favor in Washington and break the ice with the new US president, Joe Biden. Erdogan himself said in December he would like better ties with Israel.

But after tensions began to resurge in Jerusalem in April, Ankara returned to its old rhetoric, and Cavusoglu warned, “For a healthy progress in our relations, Israel should give up moves aiming to change the status of Jerusalem and Haram al-Sharif (Temple Mount).”

Israel, for its part, is irked that Hamas members are allowed to take refuge and operate in Turkey. It wants Ankara to review its ties with the movement and give certain assurances on the issue.

Bilateral ties first plunged into crisis over the Mavi Marmara incident in 2010. A thaw came six years later after Israel compensated the families of the Turks killed during the Israeli raid on the Gaza-bound ferry. In May 2018, however, tensions flared anew as the United States moved its embassy to Jerusalem and Israeli forces killed dozens of Palestinian protesters at the border with Gaza. Erdogan accused Israel of “genocide,” and Ankara asked the Israeli ambassador to leave and recalled its envoy from Tel Aviv. While the crisis has had little impact on bilateral trade, Ankara has found itself isolated in the energy rivalry in the Eastern Mediterranean, hoping to turn the tables by mending fences with Egypt and Israel.

The expected new chapter with Israel is now deferred, but could diplomatic interaction on the Palestinian issue help Ankara reconcile with its Arab adversaries? The prevailing view among observers is that the interaction will be limited and temporary. The Palestinian issue could hardly lead Arab leaders to open Erdogan credit, now that the notion of finding “Arab solutions” to regional conflicts involving Turkey is increasingly gaining prevalence. Egypt and its Gulf allies expect Ankara to moderate its policies, namely to pull out from Libya and Syria, stop backing the Muslim Brotherhood and stay clear of Arab internal affairs. Solidarity on the Palestinian issue is unlikely to soften those conditions.

The Turkish-Egyptian talks in Cairo have yet to produce tangible results, and Cavusoglu’s trip to Riyadh does not appear to have been very promising. All that he had to say after the visit was that he and his Saudi counterpart had a “cordial” discussion on bilateral problems and agreed to continue the dialogue.