Apprehension is growing in Turkey that its tourism sector, a vital hard-currency earner, might fail to recuperate in 2021 amid a new peak in the coronavirus pandemic. 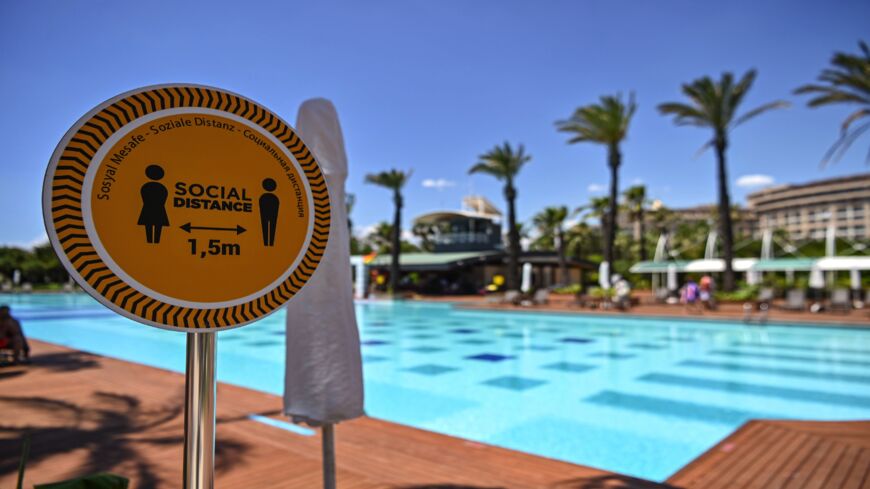 A sign reads "Social distance 1.5m" next to the pool of a hotel on June 19, 2020, at Lara district in Antalya, a popular holiday resort in southern Turkey. The novel coronavirus pandemic has hit Turkey's tourism industry, the backbone of the country's economy. - OZAN KOSE/AFP via Getty Images

An alarming surge in COVID-19 infections in Turkey, coupled with an ongoing gloom in the global travel industry, threatens to wreck hopes of recovery in the tourism sector, a vital source of hard-currency earnings for the crisis-hit country.

The Turkish government is under fire for mismanaging the pandemic, especially for holding crowded party conventions across the country in February and March. A sharp spike in infections led Ankara to reimpose partial lockdown measures last week, dampening hopes that major European countries, which provide the largest tourist flows to Turkey, could relax travel restrictions to the country ahead of the high tourism season. Ankara’s political frictions with Moscow over Ukraine might prove an additional setback for Turkey’s tourism industry, as it seeks to emerge from a terrible contraction last year. With little government support for the sector, tourism revenues plunged to $10 billion last year from about $30 billion in 2019, while revenues from air travel dropped by $8 billion to $3.5 billion.

Even before the COVID-19 upsurge in Turkey, the global prospects for a rebound in tourism were dimming. In January, an international survey among tourism experts, conducted by the UN World Tourism Organization, found that only 45% of respondents envisage better prospects for 2021 compared to last year, while 25% expect a similar performance and 30% foresee a worse outcome. International tourist arrivals plunged 74% in 2020, representing an estimated loss of $1.3 trillion in revenues — more than 11 times the loss during the 2009 global economic crisis, according to the organization. The pandemic torpedoed an upbeat trend in global tourism, which had seen tourist arrivals worldwide grow 4% in 2019 to reach 1.5 billion and had spurred forecasts of a similar increase in 2020.

After the unprecedented collapse of international travel last year, “experts foresee growing demand for open-air and nature-based tourism activities, with domestic tourism and ‘slow travel’ experiences gaining increasing interest,” the organization said. Yet most experts remain pessimistic that the tourism industry could return to pre-pandemic levels before 2023. According to the survey, 43% of respondents point to 2023, while 41% expect a return to pre-pandemic levels in 2024 or later. “The gradual rollout of a COVID-19 vaccine is expected to help restore consumer confidence, contribute to ease travel restrictions and slowly normalize travel during the year ahead,” it said.

For Turkey, a return to the pre-pandemic level as soon as possible is of vital economic importance. Besides the direct revenues the tourism sector generates, it is crucial for the earnings of interrelated industries such as food, textiles and transport. Moreover, the loss of tourism revenues exacerbates Turkey’s current account gap or foreign exchange deficit, which reached $37 billion in 2020. A similar loss cannot be ruled out this year. The industry has hoped to make headway from last year’s collapse and double its revenues to $20 billion, but even such a partial recovery could prove a tall order.

Above all, Ankara’s much-criticized, opaque handling of the coronavirus contagion has produced alarming consequences, raising the specter of fresh lockdowns and travel restrictions just ahead of the prime tourist season. Not surprisingly, foreign countries, from which Turkey expects the largest flows of holidaymakers, are in a wait-and-see mode.

Russia, Germany and Britain are the top three sources of tourists to Turkey. Their nationals accounted for about a third of tourists visiting Turkey in the pre-pandemic era, decoupling from other foreign holidaymakers also in terms of spending per capita.

After the latest surge in COVID-19 cases, Germany and Britain as well as other European countries are expected to further tighten restrictions on travel to Turkey. And Russia, the biggest source of tourists to Turkey, last week suspended most air travel with Turkey until June 1. It cited the rise in COVID-19 cases, but many believe the decision was also politically motivated, given bilateral tensions over Turkey’s support for Ukraine in its standoff with Russia.

Turkey’s tourism industry hopes that Moscow will review its decision, which has disappointed many in Russia as well. Russian tour operators and thousands of Russians planning to vacation in Turkey are eager to see the flights resume. Turkish officials say Moscow’s flight restrictions could cost the country half a million tourists and expect a visit by a Russian delegation soon to observe pandemic measures at tourist destinations. The Mediterranean province of Antalya, dubbed the capital of Turkey’s tourism sector, has become a top holiday spot for Russians in recent years.

If the tourism industry ends up with big losses this year, Turkey’s hard-currency needs would only aggravate and touristic facilities would plunge into deeper dire straits, along with their employees and suppliers. The problem would bear also on banks. Many touristic enterprises have already defaulted on loan payments but have benefitted from a lengthened grace period as part of pandemic relief measures. Without a fresh extension of the measure, their financial troubles would grow, while an extended postponement would put further strain on banks.

As to how the government could help, it appears to have no lifebuoy to throw.