Turkey plans to begin reopening domestic travel in late May, but prospects remain gloomy for its crucial tourism sector, which relies largely on foreign visitors. 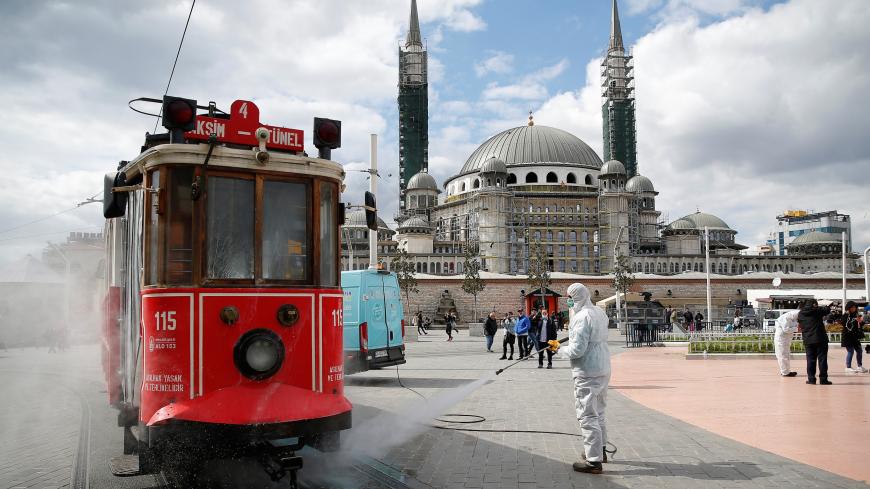 A municipal worker sprays disinfectant over a tram to prevent the spread of the novel coronavirus in central Istanbul, Turkey, March 18, 2020. - REUTERS/Kemal Aslan

Turkey’s government is drawing up plans to reopen the pandemic-hit tourism sector, a vital source of hard-currency revenues for the ailing economy, but “new normal” formulas for travel and accommodation could fall short of salvaging the sector and premature timing risks prolonging the COVID-19 contagion.

A return to the “old normal” appears a distant prospect for the global tourism industry, which, along with aviation, has suffered the heaviest blows from the pandemic. While 2020 is widely regarded as a lost year for tourism, the prospects of full recovery thereafter remain murky. The global tourism turnover was nearly $1.5 trillion last year, with services sold to some 1.5 billion customers. Extensive damage is expected in related sectors such as transportation, food industries and agriculture as well as sub-sectors catering to travelers. European and Asian countries had the largest shares from global tourism revenues last year — 39% and 30%, respectively — and they are now bound to lose the most.

In Turkey, accommodation and food services, which contribute 3% of gross domestic product, are expected to hit rock bottom, and losses in this field alone, including sectors closely related to tourism, are expected to shrink GDP by more than 5% this year. But instead of facing up to the realities and drawing up measures to salvage the future of the sector, Ankara has hastily proposed reopening formulas with dubious viability.

Almost all countries continue to enforce transnational and internal restrictions to curb the contagion, including suspension of domestic and international flights, full or partial closure of eating establishments and postponement of various tourism-related events such as fairs and conventions. Although some countries have partially eased restrictions, a return to the “old normal” to make up for the damage appears unlikely as long as the physical risks of the virus and its traumatic effects on consumers persist.

Strict control of international flights is likely to continue in the coming period, affecting global trade and tourism activities. Domestic demand alone can hardly be a remedy for Turkey’s tourism industry as the size and capacity of its facilities are based largely on external demand. Moreover, domestic consumers have suffered job and income losses in the pandemic, meaning that their appetite for tourism spending will take time to perk.

Nearly 45 million foreigners visited Turkey in 2019, bringing in some $30 billion. Those crucial hard-currency revenues, which help reduce the country’s foreign trade deficit and balance the current account, are now endangered by the pandemic, atop an alarming drawdown in the central bank’s foreign reserves.

Europeans made up the largest group of foreigners visiting Turkey last year, accounting for 38% of the total. Given the severity of their pandemic experience, European countries are unlikely to easily relax travel restrictions for 2020. Similarly, Russians and nationals of other former Soviet republics, who made the second largest group at 23% of foreign visitors, are unlikely to quickly return to Turkey for holidays. And visitors from Iran, one of the epicenters of the pandemic, and other Middle Eastern countries, which accounted for some 23% of foreign visitors in 2019, are expected to travel only in small numbers to Turkey this year.

In March, only about one million foreigners visited Turkey, a 48% drop from February under the impact of travel restrictions introduced in the second half of the month, according to Culture and Tourism Ministry data released April 30. In the first quarter of the year, foreign visitors numbered 5.6 million, a 15% decrease from the same period in 2019, while tourism revenues declined 11% to $4 billion. Sharper slumps could be seen in ensuing months.

Turkey’s tourism industry employed nearly two million people, or 6% of the country’s total employment count, before the pandemic left large numbers out of work. The government’s sole assistance for those left jobless has been a payment of approximately minimum wage from the Unemployment Insurance Fund over three months. And to distressed enterprises, Ankara has offered little more than tax deferrals and loan facilities.

Culture and Tourism Minister Mehmet Nuri Ersoy says domestic tourism could resume in late May, barring an unexpected resurgence of the pandemic in the country, which, according to the health minister, is currently in its peak period, with the rate of new infections falling.

“If things go on like this and no challenge arises down the road, internal traffic will resume in late May. The tourism season will begin with controlled domestic flights,” Ersoy said last week. He explained that comprehensive new rules have been outlined for accommodation and a newly created board would certify establishments that commit to comply with the rules. The certificates would mean a green light for holidaymakers. “We might mutually reopen the gates with countries with zero cases,” Ersoy added.

According to the ministry’s road map, hotels could begin to reopen in late May, provided they take certain precautions. Hotels would be required to remove open buffets, fill only half of their capacities and abandon all-inclusive packages in favor of boutique services. Reducing sunbeds by half and limiting the number of voyagers on daily cruises are among other measures planned as part of the “new normal.”

Yet one question remains: Can companies stay afloat at only part of their capacities to ensure social distancing?