The natural gas industry is a major emitter of methane, a powerful greenhouse gas that receives less attention than carbon dioxide, despite having a much higher warming potential. 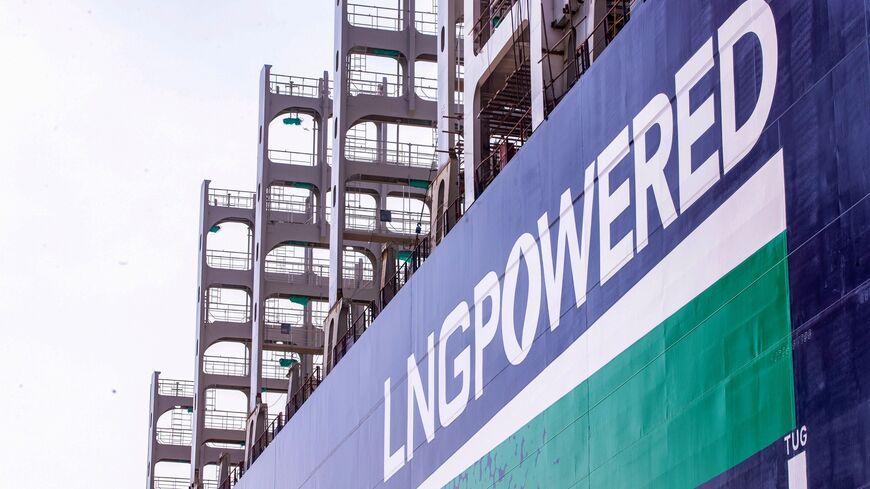 A French container ship powered by liquefied natural gas is seen docked during its launch at a shipyard in Shanghai, China, on Sept. 25, 2019. The CMA CGM Jacques Saade is the first container ship of a series of nine with a capacity of 23,000 containers equivalent to 20 feet ordered in 2017. The LNG it uses is less polluting than the heavy fuel oil used in maritime transport. The ship is 400 meters long and 61 meters wide. - AFP via Getty Images

Qatar Petroleum executives are jetting around the globe to ink new contracts after the gas-rich nation announced the largest liquefied natural gas (LNG) project in history. The mega expansion project aims to boost the country’s LNG annual production from 77 million to 126 million tons to reaffirm its dominance as the world's largest LNG exporter.

Natural gas is often touted as a relatively clean fossil fuel that emits only about half the carbon dioxide when burned than coal and is necessary for a transition to low-carbon energy under the narrative aggressively pushed by the oil and gas industry.

“Gas is sort of in a Catholic marriage with renewables in my view; they would need to stay together for a very long time,” Qatari Energy Minister Saad Al-Kaabi told Bloomberg in February.

Ian Nathan, director of global LNG services at Energy Intelligence, a US-based leading provider of energy news and analysis, said, “Our forecast for LNG is 4.1% annual growth to 2030, and roughly 75% of that demand growth will come from several large Asian growth markets such as China, India, Bangladesh, Pakistan, Taiwan and Thailand.”

But the fossil fuel industry has a dirty secret: It is the second-largest man-made source of methane, the main component of natural gas. The greenhouse gas remains in the atmosphere for only about 12 years — compared with up to hundreds, or even thousands, of years for carbon dioxide — but has a global warming potential 84 times that of carbon dioxide over two decades.

Methane leaking at every step of the natural gas value chain is responsible for about 60% of all methane emissions caused by oil and gas operations worldwide, which, in 2020, were comparable to the total energy-related carbon dioxide emissions of the European Union.

Last year, the European Commission, which could demand greater transparency on methane emissions for natural gas imported from outside the EU after 2024, said methane emissions “harm the credibility of gas” as a fuel to transition toward a “decarbonized energy system.”

“I think the industry as a whole has understood that there is an issue with methane,” said Tim Rockell, managing director at the Singapore-based advisory firm Energy Strat Asia.

The winds of change could come from buyers increasingly picky over emissions disclosures to meet their climate targets. In November 2020, Singapore's Pavilion Energy signed a 10-year agreement with Qatar Petroleum that requests every cargo under this agreement to be accompanied by a statement disclosing associated greenhouse gas emissions from well to discharge port. Pavilion Energy told Al-Monitor that methane emissions will be included.

The Oxford Institute for Energy Studies report warned that LNG cargos without certified emissions are at increasing risk of progressively being “deemed to have a lower commercial value” as buyers will have to “purchase emission offsets” to match their climate targets.

“For years, the argument was that LNG needs to be increasingly competitive from a cost point of view, but the additional burden now is that it needs to be competitive on a cost basis but also on an emission basis as well,” Nathan told Al-Monitor.

“You are likely to see other deals coming through,” Rockell told Al-Monitor, mentioning a trend toward green, net-zero or carbon-neutral LNG cargos. But those terms are yet to be universally defined, and Rockell said each company would “kind of give its own specifications” until international standards will “specify what is ‘green LNG.’”

But disclosing emissions is not enough, and the natural gas industry is moving heaven and earth to prevent its product from falling out of favor like coal, the dirtiest fossil fuel.

According to Qatar Petroleum’s Sustainability Report 2019, the company is committed to “quickly and efficiently” detect methane leaks across its operation by using “advanced optical gas imaging camera technology.” As a result of this, Qatar Petroleum, which claims to have already reduced its methane emissions by 81% since 2011, has pledged to reduce the methane leaking of its operation, known as methane intensity, to 0.2% by 2025.

Energy analysts recommend a holistic approach to go after methane leaks at every step of the natural gas value chain, not only in the production phase. The International Energy Agency estimated that it is “technically possible” to slash today’s methane emissions from global oil and gas operations by around 40% at no net cost for firms by monitoring and repairing leaks.

A race to the bottom on price could hamper such efforts, however. “Financial returns on methane emission reduction projects depend on the value of captured gas. If gas prices are low because of over-supply, regulation, or subsidies, then the incentives for capturing gas would be weak,” a 2019 report from the UN Economic Commission for Europe says.

Environmentalists argue such a focus on methane intensity is a smokescreen to divert public attention from the necessity to reduce the volume of total emissions. The International Energy Agency recommends that methane emissions be 70% lower by 2030 than in 2020.

While global methane emissions increased by 20% between 1990 and 2012, in Qatar, it jumped 835% over the same time frame, figures published by the World Bank show. This ranked Qatar as the world's second-fastest-growing methane emitter.

Qatar Petroleum did not respond to a request for comment.

As of today, there is no international body to verify companies’ methane emissions data independently. This lack of transparency is what the Oil & Gas Methane Partnership attempts to tackle. The UN-led project signed up 66 companies, including Qatar Petroleum, and aims to establish the “new gold standard reporting framework.”

To offer a reasonably fine granularity in data, the partnership’s members are now requested to report emissions “at an asset level,” including those from joint ventures. Figures provided by companies, previously not reported publicly, are now expected to be made public.

Qatar Petroleum's first reporting is “due at the end of May” and information will be made available “in the fall,” a program manager associated with the initiative told Al-Monitor. Also, data provided by Qatar Petroleum will be verified by the International Methane Emissions Observatory, an organization to be launched later this year by the UN Environmental Program in collaboration with the European Commission.

In a bid to end the climate of environmental impunity in which oil and gas companies have operated for decades, satellite measurement is gaining momentum. A $88 million emission-tracking spacecraft manufactured by MethaneSat LLC will be launched in 2022 to become “the first mission to provide the leak rate from global oil and gas production.”

Independent oversight on oil and gas companies might be needed. According to a 2020 study, methane emissions from fossil fuel extraction could have been underestimated by up to 40%. Samples from the Greenland ice sheet dated from before the Industrial Revolution show the fossil fuel industry is likely to have had “a much bigger footprint on methane emissions than previously known,” National Geographic reported.

Moreover, the production of natural gas also emits other greenhouse gases, mainly carbon dioxide and nitrous oxide. According to Shell estimates, an average LNG cargo of about 70,000 tons emits the equivalent of approximately 240,000 tons of carbon dioxide across the value chain.

Qatar said it would equip its future LNG facilities with carbon capture and storage systems to reduce carbon dioxide emissions by “about 25% below comparable operations around the world,” information provider IHS Markit reported. Critics say the technology is a distraction from longer-term efforts to decarbonize the globe's economies.

Attempts to portray Qatar’s LNG expansion plan as a necessary evil on the road to clean energy primarily serves the interests of the gas-rich nation but avoids putting the spotlight on the longer-term question: Is LNG compatible with the effort to reverse global warming?

Environment and nature
Oil and gas