Israeli officials controlling access to the mosque had limited the number of Palestinians able to worship on Friday, citing coronavirus concerns. 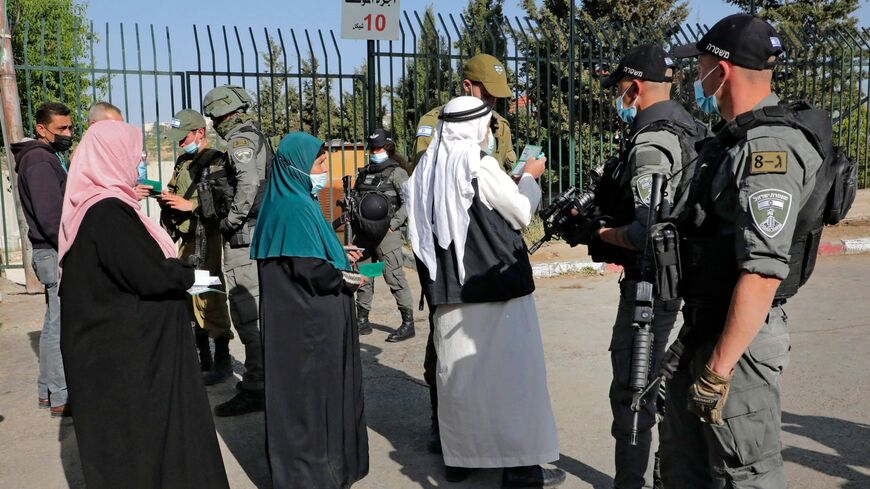 Palestinians seeking to enter Jerusalem to attend the first Friday prayers of the Muslim fasting month of Ramadan at the Al-Aqsa Mosque show their COVID-19 vaccination certificates to Israeli security forces at a checkpoint near the West Bank town of Bethlehem, on April 16, 2021. - HAZEM BADER/AFP via Getty Images

The coronavirus has limited Ramadan prayers at the Al-Aqsa Mosque for the second year in a row, with Israeli-enforced restrictions preventing thousands of Palestinians from worshipping at the holy site in Jerusalem’s Old City.

Citing the pandemic’s “high morbidity rates” in the Palestinian territories, Israel gave permits to 10,000 fully vaccinated Palestinians — a fraction of the hundreds of thousands living in the West Bank and Israel who usually attend Friday prayers during the Islamic holy month.

"The measures are being taken to allow freedom of worship and religion on one hand, and on the other hand, prevent to the extent possible the spread of COVID-19 in the region,” said the Coordinator of Government Activities in the Territories (COGAT), a branch of Israel’s Defense Ministry.

“An additional situation assessment will be carried out to examine the approved outline” after Friday, COGAT added.

The West Bank is experiencing a surge in coronavirus cases, with 590 new infections confirmed Friday. The vaccine rollout in the Palestinian territory has been slow compared with Israel's, where some 60% of the population has been vaccinated.

According to The Associated Press, “prayers passed peacefully” amid tightened security at the Al-Aqsa Mosque on Friday and those prevented from entering protested by holding their own prayers at Israeli-run checkpoints in the West Bank.

Ikrima Sabri, a Jerusalem imam who led the prayers Friday, blasted Israel for “exploiting the coronavirus pandemic to intervene in the affairs of the blessed Aqsa mosque,” which was closed last year during Ramadan over coronavirus concerns.

Muslim worshippers were also angered after Israeli officials Tuesday — the first day of Ramadan — reportedly cut the wires to the mosque’s loudspeakers when at the nearby Western Wall Israelis were honoring fallen soldiers at a Memorial Day ceremony.

The Al-Aqsa Mosque has long been a flashpoint in the Israeli-Palestinian conflict. The sprawling compound in Jerusalem’s Old City, known as the Temple Mount by Jews, is one of Islam’s holiest sites. Israel, which captured East Jerusalem from Jordan in the 1967 war, controls access to the revered mosque. The Jordanian-funded Waqf, or the Islamic trust, administers the site itself.