Official Israel is mindful not to make public statements on the upcoming Palestinian elections, yet some reports suggest it is working behind the scenes to encourage their postponement or cancellation. 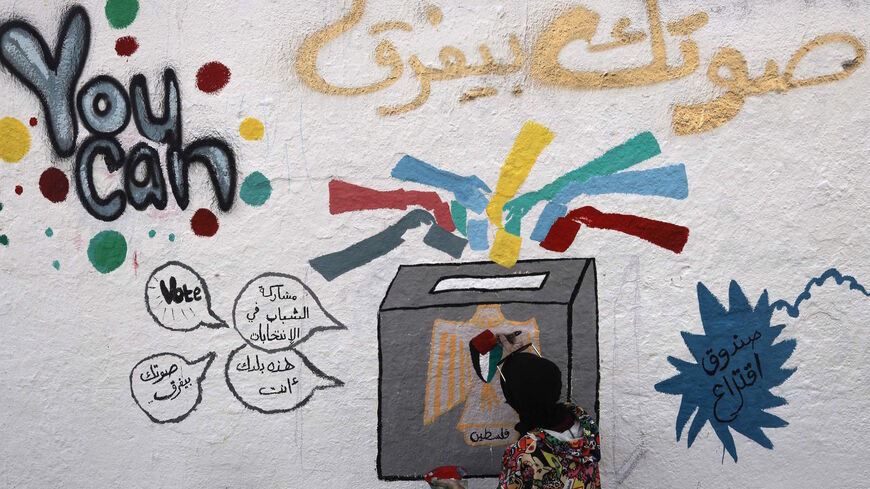 A Palestinian artist adds the final touches to a mural painting calling on people to vote during the upcoming elections (legislative in May and presidential in July) in a street in Gaza City, on March 24, 2021. - MOHAMMED ABED/AFP via Getty Images

Israelis are focused on political plots and maneuvers ahead of President Reuven Rivlin tasking a candidate to form a new government. But in parallel, Jerusalem is preoccupied with developments on the Palestinian front ahead of the May 22 Palestinian parliamentarian elections.

Polls in recent weeks have gone back and forth between Hamas and Fatah. A March 23 poll by the Palestinian Center for Policy and Survey Research had noted a small shift away from Hamas and in favor of Fatah. But that was before Palestinian prisoner and leader Marwan Barghouti announced that his own list would be running in the elections.

For Israel, this is negative news on two levels.

The first is Barghouti himself. The former Fatah senior has been imprisoned in Israel for more than 20 years and is surely not Jerusalem’s prime choice as its future Palestinian interlocutor. He is considered more hawkish and combative against Israel compared with Abbas. That being said, over the years Barghouti had contacts with several senior left-wing Israeli politicians who visited him in jail. Some of them now estimate that between a stronger Hamas and a weaker Abbas, Barghouti could be a constructive compromise.

The second level is that of the growing divide within the Fatah movement. Barghouti’s list joins that of Palestinian President Mahmoud Abbas and that of former Fatah senior Mahmoud Dahlan. Jerusalem fears that this multitude of Fatah-related lists could weaken the movement in favor of Hamas.

While Jerusalem has been quiet over these upcoming Palestinian elections, there are signs that reflect growing unease and concerns. Coordinator of Government Activities in the Territories head Maj. Gen. Kamil Abu Rukun, who will soon finish his post, said April 1 that Jerusalem should halt all of its security coordination with the Palestinians if Hamas wins the Palestinian legislative election. “We will stop everything. That, at least, will be my recommendation, based on things that happened in the past and on what I see in the field.” More so, Abu Rukun warned against upholding the elections “due to the high risk that Hamas will win.”

In that same interview (with Israeli public broadcaster Kan), Abu Rukun said Israel should prevent the Palestinian elections from being held in East Jerusalem. Was he playing into the hands of Abbas? Opponents of the Palestinian leader have been accusing him for the past few weeks of hoping to use this exact pretext to cancel or postpone the elections. The Palestinian leader had announced on several occasions that elections won’t be held if east Jerusalem residents would be prevented from participating.

Another signal in that vein came in an earlier report over a meeting at the beginning of March between Abbas and Shin Bet Chief Nadav Argaman. The Ramallah meeting itself was not unusual, as the two men meet periodically. Still, the exchange was certainly such. Argaman reportedly urged Abbas to scrap the upcoming elections, if Hamas indeed takes part. Reports said Abbas responded angrily, telling Argaman, “I do not work for you. I will decide if there will be an election and with whom. You built Hamas, not me.”

A March 4 report in Haaretz claimed that Shin Bet operatives have been contacting figures in the West Bank considered close to Hamas, threatening them not to run on behalf of the group. Reportedly, they threatened these people with arrest and separation from their families if they went ahead with representing Hamas. Shin Bet services have declined to react to that report.

Whether this report is exact, Israeli leadership will soon have to make up its mind on elections in east Jerusalem. As things look now, Israel is likely to authorize setting up a few polling stations at post offices in the east of the city. Israel knows that preventing elections there could lead to friction with the United States and Europe. European Union representative to the Palestinians Sven Kuhn von Burgsdorff has already complained over Israel ignoring a formal request for an exploratory delegation of observers to visit Jerusalem in advance of the upcoming Palestinian elections.