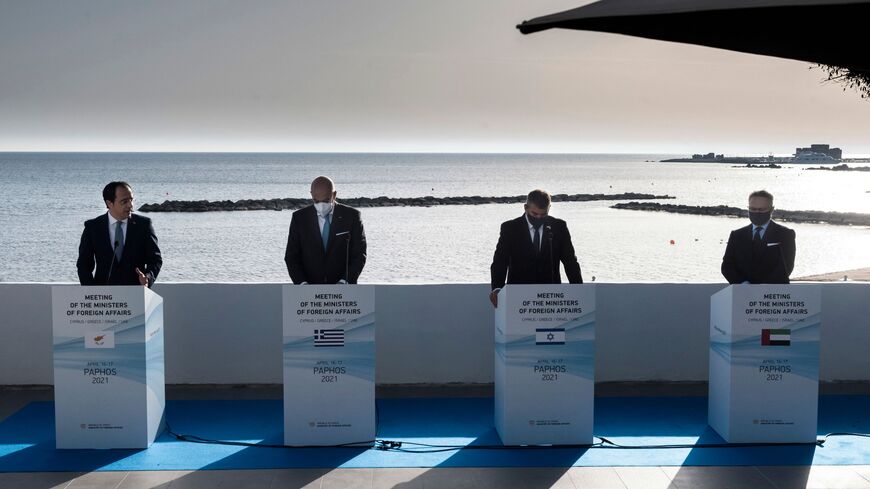 Israeli Foreign Minister Gabi Ashkenazi met April 16 in Paphos, Cyprus with Cypriot, Greek and Emirati officials in the first such meeting of its kind.

The ministers held bilateral meetings before holding a four-way meeting; there are plans for the officials from the four countries to convene regularly, both at the ministerial and professional working levels.

At a joint press conference, Ashkenazi emphasized that Israel will do whatever is needed to ensure that Iran does not acquire nuclear weapons. “We also took time to discuss challenges that Iran and Hezbollah and other extremists pose to the stability of the Middle East and to the regional peace.” He said Israel will do whatever it takes to block malevolent actions and “prevent this regime from having nuclear weapons.”

After the meeting, Ashkenazi tweeted, “It is my pleasure to meet with my friends, the Foreign Ministers, and to discuss issues of great importance to the entire region with them, particularly Iran’s aggressive policy and the destabilization of the Middle East that results from it.”

Ashkenazi added, “Israel is determined to defend itself against any attempt to harm its sovereignty or citizens, and will do whatever it takes to prevent this radical regime from acquiring nuclear weapons and arming its proxies.”

The meeting was held against the backdrop of growing tensions between Israel and Iran, especially on the maritime front, and while discussions are undergoing in Vienna on a possible renewed nuclear agreement between Tehran and Washington. Still, the Iranian threat was just one of a series of issues discussed by the foreign affairs leaders of the four countries. Israel, Greece and Cyprus have been working closely together for several months now in the field of energy, with the Emiratis recently joining this alliance of regional energy cooperation. The leaders also discussed tourism against the backdrop of the coronavirus pandemic and other key economic issues. Similarly, the subjects of Turkey and Libya were also on the table.

Gargash said the UAE seeks an “ambitious and positive agenda in the region and the Abraham Accords were driven by the necessity of an alternative strategic view the region based on stability, prosperity and opportunity.”

But the greatest importance of the meeting may have been the framework created there, and the evident feeling of trust registered by its participants.

Still, it remains to be seen how Israel’s next foreign minister will take up this newly forged friendship. Ashkenazi did not run in the March 23 elections and is bound to step down from his post in the coming weeks.