The Iranian negotiators appeared dogged in their demand for a full removal of US sanctions, rejecting reports that an interim deal is in the making. 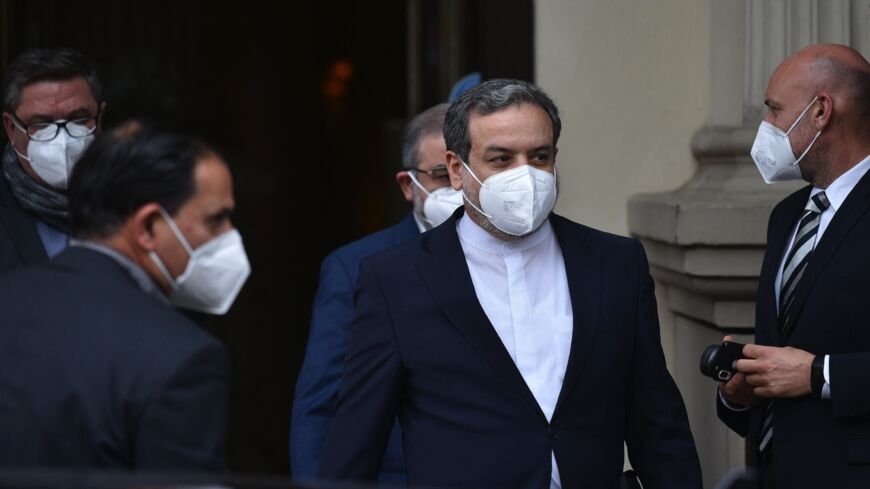 Abbas Araghchi (C), political deputy at the Ministry of Foreign Affairs of Iran, is leaving the Grand Hotel Wien after the closed-door nuclear talks in Vienna on April 16, 2021, where diplomats of the EU, China, Russia and Iran hold their talks. - JOE KLAMAR/AFP via Getty Images

"There is no discussion whatsoever on an interim deal," declared Iran's top nuclear negotiator, Abbas Araghchi, as Tehran and the remaining members of the Iran nuclear deal were resuming talks in Vienna on how to revive the accord.

Araghchi, who was also a senior member of the Iranian team during talks that culminated in the original deal in 2015, added that Tehran will only negotiate "the final step in the removal of the unjust US sanctions." He dismissed as "baseless" all the "rumors" about a step-by-step agreement.

The statement was made ahead of the resumption of talks in the Austrian capital on April 20, in which the United States has been involved but indirectly. Details from the meetings remain undisclosed, but in the public sphere, Iranian officials have not lowered the bar, insisting that Washington must lift all the sanctions it reimposed on the Islamic Republic following the 2018 departure from the accord under the former president, Donald Trump.

Araghchi repeated an earlier assertion that Iran will not allow for the talks to become "talks of attrition," while not "rushing for the outcomes" either. Any decision in this regard, he said, will be made by senior officials in Tehran, an indirect reference to Supreme Leader Ayatollah Ali Khamenei, whose greenlight is essential for any signature by the Iranian negotiators.

Ahead of the new meeting, the spokesman for Iran's Foreign Ministry also reported "good progress for the return of the United States to its obligations." Saeed Khatibzadeh, however, acknowledged that the talks were "very complicated" and stressed that Iran needed guarantees that Washington "will indeed honor all its commitments this time."

Iran insists that any US removal of sanctions will have to go through its own verification process, a demand that seems to have remained at the core of the ongoing talks. The debate over how long such verification takes place is also dividing Iran's political elites. The conservative parliament has declared the process will have to receive its approval, which may take up to six months.

Yet President Hassan Rouhani, whose second and last term is ending in August, has scrambled to ease worries in Washington about such verification. The spokesman for his government, Ali Rabiee announced April 20, "We will swiftly do the verification before returning to full compliance to our obligations." He did not, however, set a timetable.

Iran has taken multiple measures in breach of its obligations. But it has justified most of them as a response to the other parties' failure to provide Tehran with the economic benefits for which it clinched the accord. Among those steps, the most recent one was found particularly "provocative" by the United States. Last week, Iran pushed its uranium enrichment to the 60% level and described it as a reaction to the Israel-blamed attack on its sensitive Natanz nuclear facility earlier this month.

Still, signals of optimism, though cautious, have been sent from the parties involved in the negotiations. Russia's ambassador to the Vienna-based International Atomic Energy Agency said on Monday that the talks have already moved into the "drafting stage." Similarly, the High Representative of the European Union, Josep Borrell, and China's envoy to the meetings, Wang Qun, have both cited overall progress.

While dates for an actual deal remained unspecified, the positive statements were already leaving impacts, albeit slightly, inside Iran. The country's forex, which has seen multiple episodes of unprecedented turbulence in the past three years, woke up to some recovery on Tuesday, as the Iranian rial rebounded by around 2% in central Tehran's early trading.