The United States confirms the death of a militia fighter belonging to an Iran-backed group in a recent airstrike on Abu Kamal. 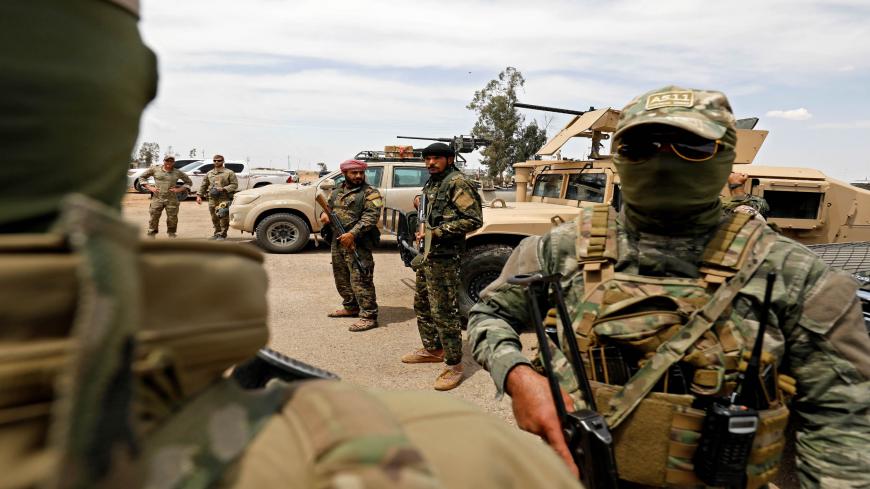 Members of the Syrian Democratic Forces and US soldiers (L) gather at al-Tanak oil field as they prepare to relaunch a military campaign against the Islamic State, near Abu Kamal, Deir ez-Zor province, Syria, May 1, 2018.

The US Defense Department said one militia member was killed and two were wounded in an airstrike last week on an outpost in eastern Syria used by Iran-backed groups.

That assessment aligns with a claim by Kataib Hezbollah last week that an Iraqi national named Rahi Salam Zayed was killed in the air raid.

Press Secretary John Kirby acknowledged last week that the United States believed there were casualties, but said at the time the damage assessment was ongoing. He could not confirm the victim’s nationality on Monday.

The nighttime strike marked the first combat operation authorized by President Joe Biden since taking office in January. It was ordered in response to a series of rocket attacks on Baghdad's Green Zone and US-led coalition and Iraq bases last month.

Breaking with the Trump administration, current US officials refrained from immediately blaming Iran-backed militias for the barrages, but vowed to hold those involved accountable, including potentially Iran.

The militiaman killed in the strike was reportedly a member of the 46th Brigade of Iraq’s Popular Mobilization Units, a unit believed to be affiliated with Kataib Hezbollah, which is backed by Iran's Islamic Revolutionary Guard Corps. Both Kataib Hezbollah and Iran’s government denied roles in the recent attacks in Iraq.

Iran-linked targets in Syria have been subject to years of sporadic airstrikes by Israel — which, in coordination with the United States, has sought to prevent Tehran’s proxies from moving weapons too close to Israel’s borders.

Pentagon officials said last week that intelligence gathered by Iraqi and Kurdistan regional authorities helped the United States determine which groups were behind the recent rocket barrages in Iraq.

Iraq’s Defense Ministry sought to distance itself from a statement by Defense Secretary Lloyd Austin last week that Baghdad provided intelligence that enabled the US strike in Syria.

“It was very much a team effort,” Kirby said Friday, before clarifying that Iraqi authorities only partook in identifying the groups that launched the attacks in Iraq — not in targeting the group in Syria.

Kirby described the strike as little more than a “pinprick” on Monday. Nonetheless, it has drawn renewed scrutiny from lawmakers amid a broader push to rein in two decades of expansive US military authorities following the Sept. 11, 2001, attacks.

The Biden administration is seeking to reenter negotiations with Iran in order to limit the latter country’s nuclear program. The Trump administration abandoned the original Joint Comprehensive Plan of Action agreement in 2018 in favor of economic sanctions designed in part to cripple Tehran’s financial ability to support proxy militias in the region.

Iran’s Foreign Ministry on Sunday rejected a proposal to engage directly with the United States and the European Union on the issue, marking another snag in the albeit early preliminary diplomatic dance.

Another US partner state, Saudi Arabia, has also come under renewed attacks in recent weeks by projectiles fired by Yemen’s Houthi rebels.

Last week, the head of all US military forces in the region, CENTCOM commander Gen. Kenneth “Frank” McKenzie said the Houthis’ weapons “don’t spring from the ground in Yemen,” and that some of the weapons are supplied by Iran.

“I recognize it is a problem and we will continue to get after it,” he said.