Egypt’s al-Samaha village is a remote, all-female village and a refuge to many divorced women, widows and survivors of domestic abuse who are provided with work opportunities to support their children and lead a peaceful life, at bay from the hardships in their communities. 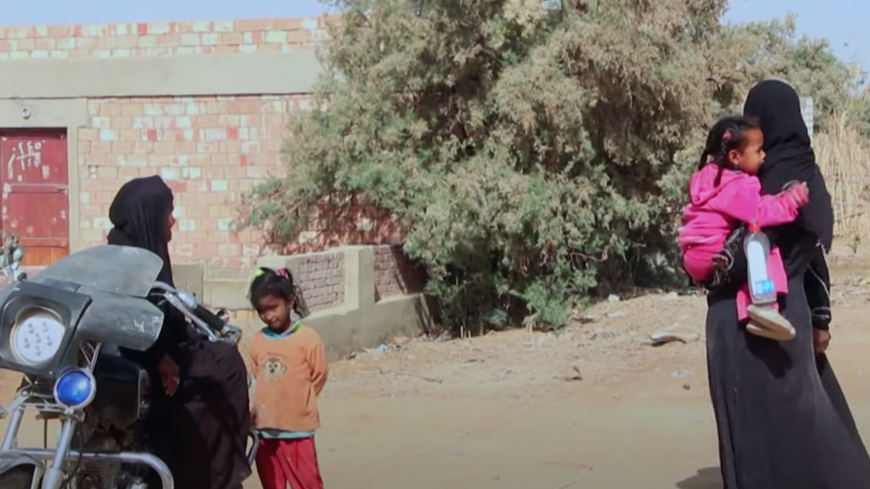 Women and children are seen in a screen grab from a video of Al-Samaha Village from March 19, 2019. - YouTube/AlmasryAlyoum

CAIRO — Only women are allowed to live in al-Samaha village, which is located in a remote area in Upper Egypt. It is a retreat and refuge for many of them to lead a calm and safe life away from the pressures of life or crimes of violence and discrimination against them.

Al-Samaha village stretches over an area of 1,818 acres, which is only approximately 8 square kilometers. Yet the village is still receiving more women and presenting them with economic activities.

This is an all-female village, as its residents want it to be.

“When my husband passed away, I faced so many hardships amid the hubbub of the Minya governorate’s capital. I decided to move with my children to al-Samaha village, where the government provided us with a furnished house and land to cultivate and live off its crops,” E.H. told Al-Monitor.

E.H. is a widow in her 30s and the mother of two. She supports her children through her small agricultural project in al-Samaha village.

Al-Monitor contacted the women of al-Samaha village through the private Facebook group Wadi al-Saidah, which includes several women from Upper Egypt — most of whom go by pseudonyms rather than their real names as it is more common in rural areas to call women by the names of their children or fathers.

E.H. said she has suffered a great deal to obtain the inheritance that her husband had left to her and her children, as his family insisted the children can only have access to the bequest when they reach the age of majority, for fear that the widow would get her hands on their inheritance since she is their legal guardian. This is the case of several women in Upper Egypt.

“I did not have an income to appoint a lawyer to start legal proceedings to fight for the inheritance my husband had left us. I tried to look for a job to look after my children, but the competition was fierce against men who always land job opportunities instead of women, especially when women are not highly educated, as is my case. This is why I decided to move with my kids to al-Samaha village and make a living from agriculture,” E.H. added.

E.H.’s story is one of dozens of other stories about the suffering of al-Samaha village's residents before they moved to it, prior to its foundation in 1998 120 kilometers northwest of the city of Edfu in the Aswan governorate.

The decision came in 1998 at the directives of the Ministry of Agriculture and the Aswan governorate authority to found all-female villages to serve as shelters and homes for divorced women, widows and victims of domestic violence, and where women can find work in agriculture and handicrafts and have an opportunity to recover from their previous painful experiences. The government provides these women with land, furnished homes and monthly pensions.

According to the latest statistics published on the Masrawy website on March 6, the number of women residing in al-Samaha amounted to 300, including their children.

The inhabitants of the village are mostly women from Upper Egypt; others are from different governorates across the nation. They work on agricultural land granted to them by the state. They raise cattle and livestock and work with handicrafts such as palm branches, kilims and pottery.

Discriminatory inheritance is not the only thing that pushes women to seek refuge in al-Samaha village.

M.A., divorced and the mother of two, left her husband because he and his family used to beat her. She said that although she came to the village where the state granted her agricultural land and a monthly stipend of 350 to 420 Egyptian pounds ($22.25 to $27), she had suffered for a long time from the deteriorating services in al-Samaha village.

“For many years, services were really bad, with very poor sewer pipelines, and only a single water network for irrigation, while drinking water and water used for our daily use would be delivered in huge water trucks every morning. In many cases, these were not enough to cover the needs of the population,” M.A. told Al-Monitor.

The village flooded with sewage water in 2019, but Egyptian authorities were swift to remedy the situation against the backdrop of complaints from the village’s inhabitants at the time through the Youm7 Egyptian daily. The sewage network was fixed and no complaints were made again.

In this context, M.A. said, “Under President Abdel Fattah al-Sisi, the situation has greatly improved in relation to issues such as the sewage and the amount of water delivered to us daily.”

“There are still many opportunities to improve the living conditions, especially with the ‘Hayat Karima’ (A Decent Life) initiative, (launched by the presidency in Upper Egypt in 2018) that already began implementing projects in Wadi al-Saida (the city to which al-Samaha village is annexed),” she said.

“This encourages many women to stay here despite the fact that many of them have left in the past years a few weeks or months after their arrival. The biggest challenge, however, is the absence of schools and equipped hospitals,” she added.

According to Egyptian newspapers, there is a total of six elementary and preparatory schools in the city of Wadi al-Saida, serving six villages, which means a school for each village. The nearest secondary, technical or vocational schools are 33 kilometers from the city — a relatively far distance for the village’s dwellers, especially in the absence of public transportation, which prevents many women from sending their children to school.

For S.M., a widow in her 50s who left al-Samaha village about six years ago, the issue was not about transportation.

“The issue of services and some facilities were manageable or adjustable. I could afford to pay for my son’s transportation to school, but there was a much bigger problem,” she told Al-Monitor.

S.M. left the village because it was governed by a system managed by an observer from the governorate’s Diwan authority, whereby male children could no longer stay in the village after a certain age — namely around 16 to 18, according to the women there — since it was an all-female village. The children then move in with their other relatives in cities, either grandparents or their fathers. S.M. said the rules also did not allow her daughter to get married in the village and live near her mother.

Mohammed, S.M.’s middle child who is currently studying at Sohag University, told Al-Monitor he had a happy life in the village until the age of 15, away from the hustle and bustle of the city. He was delighted to learn about the ongoing developments taking place there and expressed his hope that the state would pay close attention to the town where he grew up and maybe advertise it at the tourist level so that women could visit it for leisure time and vacation.