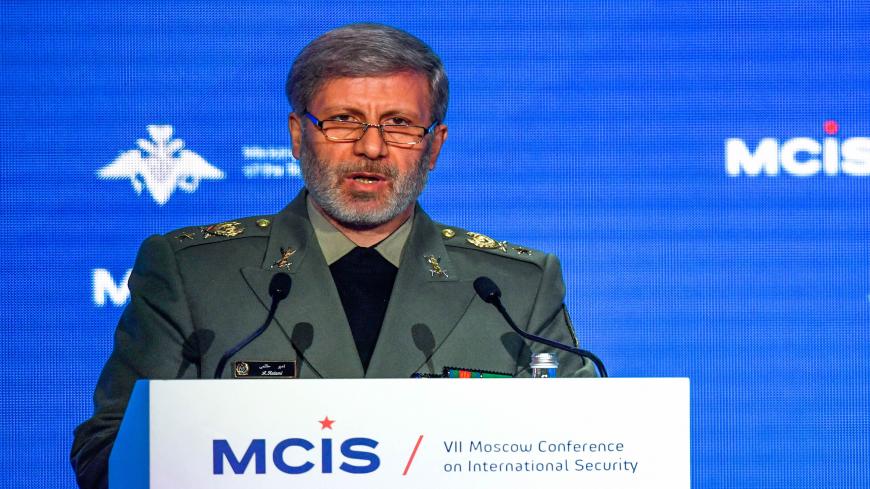 In yet another statement of defiance, Iran expressed dogged resolve to press ahead with its missile program, which its Western adversaries consider as “destabilizing."

“We will continue to seek our utmost goals in our missiles and defenses,” declared Defense Minister Brig. Gen. Amir Hatami as he outlined Iran’s defense strategy in the new Persian year starting March 20. In his virtual address March 18 to senior defense officials, Hatami noted that the Islamic Republic will do so as it continues to face challenges in the region.

The comments came only three days after the naval force of the Islamic Revolutionary Guard Corps (IRGC) unveiled what it called a "missile city." The underground facility is hosting ballistic and cruise missiles as well as electronic warfare equipment. But according to the IRGC commander, what was displayed at the site represented only a “small portion” of the IRGC navy’s “far-reaching and enormous missile power.”

In his speech, the Iranian defense minister enumerated a series of key events in the region over the past two years, which he described as “malicious plots” aimed at “defeating the Islamic Republic.” Hatami referred to the killing of Iran’s top commander Qasem Soleimani in neighboring Iraq and that of Iran’s top missile man and nuclear scientist Mohsen Fakhrizadeh well inside Iranian soil. “We did realize that all those plots failed and the current overall situation in the region has turned against the interests of the United States and its regional subordinates.”

Hatami did not clarify further how those developments have undermined the United States. Yet attacks attributed to Iran-backed armed Shiite groups in Iraq targeting US interests have seen an uptick in recent months. And in Yemen, the pro-Iran militias have launched projectiles toward Saudi military bases and oil facilities. The United States and Saudi Arabia have alleged that the weapons used by those groups are supplied by the Islamic Republic. Tehran categorically denies the charge but argues that such attacks are a form of “legitimate defense” put up by the armed groups.

The defense minister’s speech fell within a wider pattern of Iran’s official line that its missiles are not up for negotiations. Western states, on the other hand, insist that Tehran needs to sit at the table and soothe their concerns.

The missile program is one of few foreign policy matters on which Iran’s rival political factions have broad consensus. That could mean Iran will continue to hold on tight to its missiles regardless of who sits in the presidential office in Tehran. And the tug of war between the West and the Islamic Republic over the latter’s missiles may even further intensify after June, when the pro-engagement President Hassan Rouhani is to be replaced with a successor, who could rise from the less accommodating hard-line camp.