This will be the first face-to-face meeting between the two since US President Joe Biden took office. 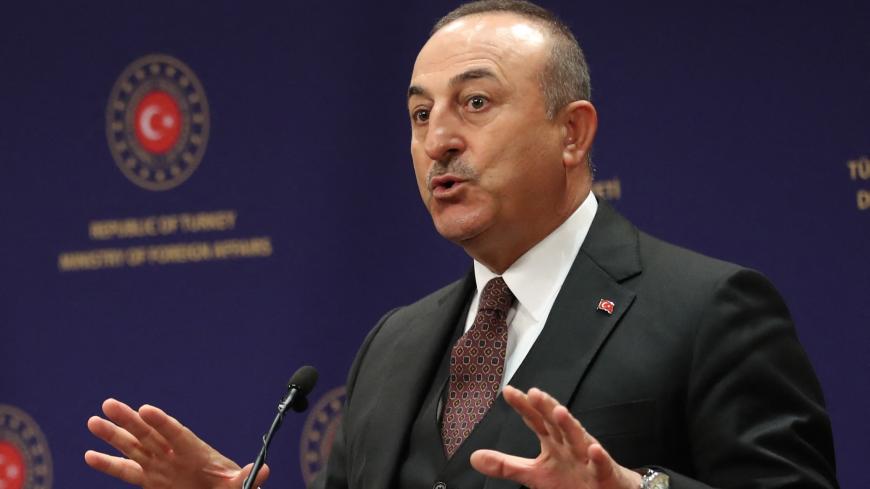 US Secretary of State Antony Blinken is expected to hold separate meetings with Turkish Foreign Minister Mevlut Cavusoglu and Greek Foreign Minister Nikos Dendias on the sidelines of a NATO foreign ministers gathering in Brussels on March 23-24, diplomatic sources told Al-Monitor. This will mark the first face-to-face meeting between Blinken and his Turkish counterpart and the first ever high-level official in person contact of its kind between the two NATO allies.

The sources said Blinken is expected to meet Dendias first, and the meeting with Cavusoglu is due to take place on March 23. The sources said Turkey's recently acquired Russian-made S-400 will be on the agenda along with all the other knotty issues dividing the NATO allies, including the eastern Mediterranean where Turkey and Greece are butting heads over hydrocarbon rights and US support for Kurdish militants in Syria.

The State Department declined to confirm whether either meeting would be taking place.

“We refer you to the spokesperson’s statement released on Friday announcing the secretary’s trip to Belgium.  We do not have any additional updates to provide at this time,” the State Department said in an email.

The United States and Turkey are at odds over a slew of issues, but none has proved as toxic as Turkey’s acquisition of the S-400 missiles, for which Ankara has been sanctioned under the Countering America’s Adversaries Through Sanctions Act. Turkey’s refusal to permanently mothball the Russian kit and agree to a monitoring mechanism that would ensure they are not activated at any time — one of the few workable compromises — is seen as the main reason that President Joe Biden has not yet called Turkish President Recep Tayyip Erdogan.

Turkey’s ever worsening human rights record, with torture on the rise and thousands of dissidents behind bars, isn’t helping either.

It remains unclear whether either side will come with any new proposals on the S-400. But unlike the Donald Trump administration, which engaged in a pattern of  making concessions to Ankara only to have Ankara pocket them and persist in its defiance, the Biden administration has placed the onus on Ankara to make concessions.

Ongoing talks between Turkey and Greece to head off a confrontation over the Eastern Mediterranean, however, are seen as a rare speck of hope on an otherwise dark horizon.

The two sides held further exploratory talks in Athens last week, after more than 60 rounds, to seek common ground on their long-standing maritime boundaries dispute before a European Union summit that kicks off on March 25. The talks, which were paused for five years before resuming in January, are meant to lay the ground for formal negotiations to resolve competing claims over their respective continental shelves, the divided island of Cyprus, exploitation of hydrocarbon reserves in the eastern Mediterranean and air space over the Aegean. Turkey has toned down its muscle flexing in recent months, pulling back its drill ships from contested waters.

NATO Secretary-General Jens Stoltenberg is believed to have urged Blinken to meet with Cavusoglu and Dendias by way of encouraging the talks to move forward, but more generally because of what critics call his “default thinking” that is “do not lose Turkey.” Well-placed sources familiar with Stoltenberg’s arguments on the subject contend he is more willing to help Turkey “manage the Biden administration than to help the Biden administration to manage the Turkey problem at NATO.” Erdogan has acknowledged Stoltenberg’s policy of appeasement, which includes praising Turkey for its role in combatting the Islamic State, when US officials have privately and in the case of National Security Council Middle East czar Brett McGurk publicly — albeit before joining the Biden administration — slammed Turkey for its open-door policy on foreign fighters traveling to Syria.

“We would like to thank the NATO Secretary General @jensstoltenberg for his objective evaluations on Euro-Atlantic security and [defense] matters,” Erdogan said in a March 3 tweet.

The dilemma facing Ankara’s Western partners is “how we don’t lose Turkey without giving Erdogan a free pass.” The question has gained fresh urgency as the Turkish leader threatens to acquire a second batch of S-400s and Russia’s Sukhoi Su-57 and Su-35 fighter jets. Erdogan has no intention of quitting NATO, and relinquishing the status, protection and leverage it offers in its dealings with other competitors, including Russia. But he skillfully exploits Western fears to avoid harsh consequences for Turkey’s increasingly roguish behavior, the sources observed.

A similar dynamic is playing out in Turkey’s relations with the EU. The bloc has frozen plans to blacklist more senior executives at Turkey’s state-run Turkish Petroleum Corporation “in the clearest sign that diplomatic offensive by Ankara this year is bearing fruit,” Reuters reported on March 18. European and US diplomats briefing Reuters said the Biden administration had urged the EU not to impose sanctions at a time when Turkey “appears more willing to compromise.”

It is unclear what compromises they were referring to other than Ankara’s de-escalation in the eastern Mediterranean.

The past week alone has seen Turkish prosecutors launch a case to shut down the country’s third-largest party, the pro-Kurdish Peoples’ Democratic Party (HDP), strip an HDP lawmaker of his immunity and detain him for retweeting a news article calling for peace between Turkey and its Kurds, and pulling out of the Istanbul Convention to prevent violence against women.

Hopes among Turkey’s detractors within the EU and NATO alike are that Blinken will deliver a firm message to Cavusoglu that Turkey’s disruptive behavior will have consequences and that NATO remains a values-based alliance.

“Biden has called for renewing alliances and centering democratic values in foreign policy,” said Nicholas Danforth, a nonresident fellow at the Hellenic Foundation for European and Foreign Policy “This is a chance for his administration to show it will pursue both goals in tandem,” he told Al-Monitor.

Update: March 22, 2021. This article has been updated since its initial publication.