Israeli mayors offer gifts, incentives for people to get vaccinated

Some Israeli mayors offer gifts and benefits for residents getting vaccinated; others sanction those who refuse. 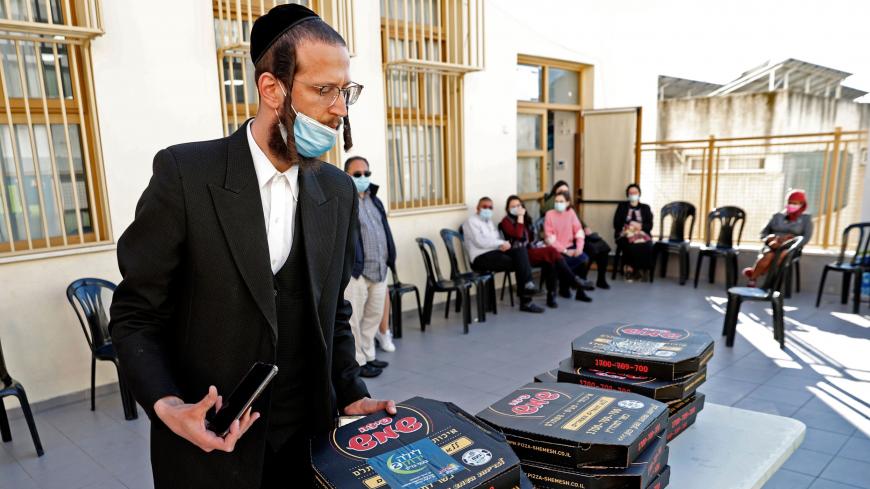 A person receives a pizza after getting a dose of the Pfizer-BioNtech COVID-19 coronavirus vaccine, at Clalit Health Services in the Israeli city of Bnei Brak, a home to many ultra-Orthodox Jewish residents, near Tel Aviv on Feb. 15, 2021. - JACK GUEZ/AFP via Getty Images

From the early morning hours of Feb. 11, public address systems made entreaties to the public of Bnei Brak, Israel’s largest ultra-Orthodox city, situated near Tel Aviv. Residents were invited to come that night and receive vaccinations against COVID-19 at four Health Funds sites. Provisions were made in advance for keeping men and women in separate areas, and even small rewards were distributed. They included a container of the traditional Jewish Sabbath dish cholent, a traditional challah loaf bread for the Sabbath and a can of Coca-Cola.

The “Green Night” campaign initiated by the Bnei Brak municipality was designed to encourage residents of one of Israel’s most crowded cities to get vaccinated against the coronavirus. The city had especially high morbidity rates over the past year; according to the Health Ministry, one in five residents of Bnei Brak had or has COVID-19. Despite this, only 17% of the city’s residents received the first inoculation, and only 9% returned to receive their second. The reason? There has been an avalanche in Israel of fake news, warning both men and women that the vaccination causes fertility problems, among other things. To counter this, the municipality worked with the city’s most reputable rabbis to encourage residents to save themselves from the illness, and get the shot. And it worked!

When the sun rose Feb. 12, it became clear: The city’s initiative achieved its goal and about 3,300 city residents were vaccinated in five hours of a night operation that was widely covered by all the media outlets. Yeshiva students in their 20s were photographed as they left the vaccination sites with smiles on their faces — and bags full of packaged cholent and fresh challah. Due to the success of the project, the “Green Night” initiative will be repeated Feb. 18 in Bnei Brak.

The Health Ministry closely followed this unusual initiative and breathed a sigh of relief over its results, because overall vaccination rates in the country had started to decline from the beginning of February. Early last week, vaccination sites were almost empty and the long, crowded lines of January had disappeared. At the height of the operation, 200,000 people aged 16 and above received vaccination (in the two doses) in the space of a week. Only about 100,000 did so last week, at its low point.

This was not the result of a scarcity of vaccines; Israel has a large inventory of the Pfizer-BioNTech product. This is rather happening because young people have kept their distance from the vaccine. A “fake news” industry has sprung up in Arab and ultra-Orthodox societies, saying the vaccine will negatively impact fertility in young people.

Meanwhile, national authorities fighting the coronavirus were quite worried. Although a significant portion of the adult population had been vaccinated and morbidity had decreased in an impressive manner, the COVID-19 wards in the hospitals began to report a rise in the number of young people who caught the virus — and some of them were very ill. This step backward has been ascribed to the spread of the British mutation.

The Health Ministry reported that the economically established cities dispense a higher percentage of vaccinations, while in the weaker regions the vaccination rate is lower — and the morbidity rate is higher. This relates mainly to Arab and ultra-Orthodox localities.

At that point, the mayors then started to take action; they set out to create coronavirus-free "green municipal bubbles” and make the local environment safer. Suddenly, the vaccine index turned into a kind of competition among  mayors.

In the northern city of Kiryat Shmona near the Lebanese border, young Mayor Avichai Stern initiated an accelerated vaccine operation. He decided to establish only one large vaccine compound in the city instead of several small ones, in order to create an illusion of high demand (a marketing trick). So the vaccinations were held in the center of town, and it was a success. Kiryat Shmona may be the world’s most vaccinated city for COVID-19 after reaching 100% of its target, the 16 and up population.

Simultaneously, more and more local initiatives began to sprout based on the carrot and stick. Some cities announced enticing benefits for those who receive the shot. In Jerusalem, a city with large populations of Arabs and ultra-Orthodox Jews, Mayor Moshe Leon initiated a rewards program  for young people who got the vaccine. For example, the municipality announced a “vaccination competition” for 11th and 12th graders: The winning schools were to receive free tickets to cultural events, and about 5,000 tickets for soccer games on a first-come, first-served basis. Of course, the prizes won't be handed out until the COVID-19 reality allows for large events and gatherings. Many hope that this will be possible in the next few weeks.

A lottery is also being held in which 45 computer tablets will be raffled off among Arab young people in East Jerusalem who come with their parents for the vaccination, or with other adults 50 years of age or older.

On the other hand, there were quite a few mayors who chose to try to boost vaccination via sanctions. Take Lod, for example, with its Jewish-Arab mixed population and low socioeconomic rating. Lod Mayor Yair Revivo announced a list of sanctions against anti-vaxxers. He threatened that those refusing to vaccinate “will not be able to receive services from the municipality, their children will be barred from the education system. … Residents will not be able to come to the municipal market when it opens, and other things we will publish later on. Anyone who is not vaccinated or has not recovered from COVID will not be able to receive services."

It should be noted that the law in Israel does not make vaccination mandatory; thus, sanctions cannot be imposed on those who avoid vaccination. Therefore, Revivo’s announcement elicited criticism from legal experts and parents.

Yavne Mayor Zvi Gov-Ari also chose the sanctions route. He announced that teachers who refuse vaccination will not be allowed to teach in the city’s educational institutions.

Following these incidents, Israel’s Justice Ministry made clear that mayors do not have the right to prevent non-vaccinated teachers from entering educational institutions. In a letter sent to the mayors, the ministry clearly stated that local authorities do not have the authority to impose travel restrictions or work restrictions in addition to those imposed by the central government.

Meanwhile, Health Ministry officials have been encouraged by events of the recent days: Vaccination sites are filling up again with more and more young people. As of the morning of Feb. 16, there are 4 million people who have received at least the first of the two vaccinations.

The reason for this (besides the threats of the mayors) is the decision that was adopted yesterday in the COVID-19 Cabinet: to open up the economy rather extensively starting Feb. 21, after the long weeks of closure. It was decided, for example, that people will be able to do certain activities or enter certain venues only if they carry a vaccination certificate (of having received both doses), or a certificate stating they had recovered from COVID-19. The “venues” include exercise gyms, cultural venues and restaurants. Ideally, this will be the best way to encourage vaccination.