Netanyahu’s friendship with Putin benefits Israel, but has limits

Moscow played a central role in the release of the Israeli woman who crossed the border into Syria, but might prove less helpful on Iranian entrenchment in Syria or the Palestinian issue. 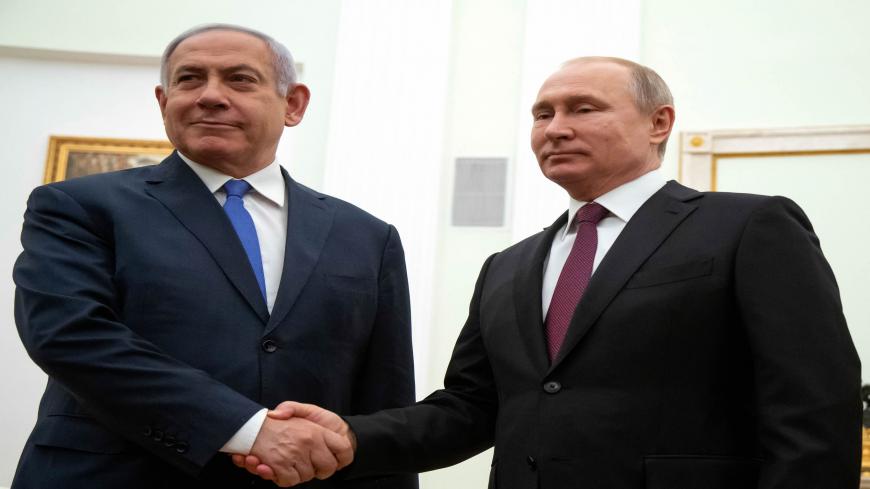 Israeli Prime Minister Benjamin Netanyahu prides himself of his close relationship with Russian President Vladimir Putin. Last week, he had yet another opportunity to expose the extent of this friendship.

On Feb. 19, Syria agreed to release an Israeli woman detained by its security services after crossing the border into the country. The release was achieved after elaborated discussions between the sides, mediated by Moscow. Jerusalem agreed to free two shepherds who had crossed the border into Israel, and to shorten the sentence of Nahal al-Makat from the Druze Golan Heights village Majdal Shams. Another component of the deal was revealed only later on. Israel agreed to purchase an unknown number of the Russian coronavirus vaccine Sputnik V to be donated to Syria.

Netanyahu was quick to thank his Russian friend for the release deal. "Several days ago, a young Israeli woman crossed the border to Syria. I spoke twice with my friend Russian President Vladimir Putin. I requested his assistance in returning her, and he acted. I would like to thank him for again having joined in an effort to bring Israeli citizens back to the country," Netanyahu stated.

Netanyahu’s office stressed that Netanyahu spoke with Putin twice on this issue, and that the State of Israel appreciates the actions of the Russian president.

In January 2020, Netanyahu boasted of his friendship with Putin for another, yet somewhat similar reason. He had managed to secure the release of Israeli backpacker Naama Issachar, convicted in Moscow for transporting drugs into the country. Netanyahu even arrived personally in Moscow to welcome Issachar upon her release and bring her back home. It was two months only before the March 2 elections in Israel that year. Neither Netanyahu nor Putin raised the issue of an alleged deal. Only later it was revealed that as a gesture of goodwill, Israel agreed to assist Russia in some legal real estate issues regarding the Russian church in Jerusalem.

This give-and-take relationship has many facets, and on several fronts and frontiers.

For the past few years, Israel and Russia are coordinated, to some degree, on movements in Syrian skies, to avoid any misunderstandings between the two armies. Foreign publications have attributed to Israel several aerial attacks in the past few weeks of Iranian targets in Syria. Israel has not taken responsibility for these attacks.

On Jan. 18, Russian Foreign Minister Sergey Lavrov addressed these strikes, hinting that coordination between the two countries was not as extended as Moscow would like it to be. “If Israel is really forced to respond to threats to the Israeli security coming from the Syrian territory, we have told our Israeli colleagues many times, 'If you see such threats please give us the information,'” Lavrov noted.

Directly addressing Israeli leadership, Lavrov continued that Moscow did not want Syria to become an Israel-Iran war battlefield. “So, our dear Israeli colleagues, if you have facts that your state is facing threats from the Syrian territory, report the facts urgently and we will take every measure to neutralize the threat,” he said.

Jerusalem did not respond to these comments publicly, but the fact that aerial attacks against Iranian targets in Syria continued well after Lavrov’s remarks speaks volumes. While Israel appreciates greatly bilateral coordination for the safety of its jets and for the safety of Russian jets, it will not curb its campaign against Iranian entrenchment in Syria. In an apparent reference to Lebanon and Syria, Defense Minister Benny Gantz said Feb. 8, “We will not hesitate to uproot the Iranian entrenchment near our borders.” Israeli and Russian priorities on Syria are not exactly diverging. While Moscow would like to preserve the Assad regime, Israel is focused on battling Iranian presence there.

Russia is also hoping to play a role in the reconciliation between Fatah and Hamas, and perhaps even in future talks between Israel and the Gaza Strip, and Israel and the West Bank Palestinian leadership. An example for such involvement was registered Feb. 6, when Hamas and Fatah delegations held talks in Moscow with Iranian Ambassador to Russia Kazem Jalali to discuss the internal-Palestinian rift and upcoming Palestinian elections. Russian Deputy Foreign Minister Mikhail Bogdanov met with both delegations separately to discuss these same two issues.

Jerusalem is aware of the Russian involvement. Evidently, for now at least, Moscow has better and deeper ties with both Palestinian groups than the new Biden administration. Like the case of the Moscow-Assad axis, here too, Jerusalem chose not to confront Moscow publicly on sponsoring Iranian involvement with Hamas and the Palestinians. Netanyahu comprehends the limits of his friendship with Putin.