Prime Minister Benjamin Netanyahu gives a rare and surprising interview to Israel’s Channel 12, making jokes and smiling throughout and throwing off the news anchor. 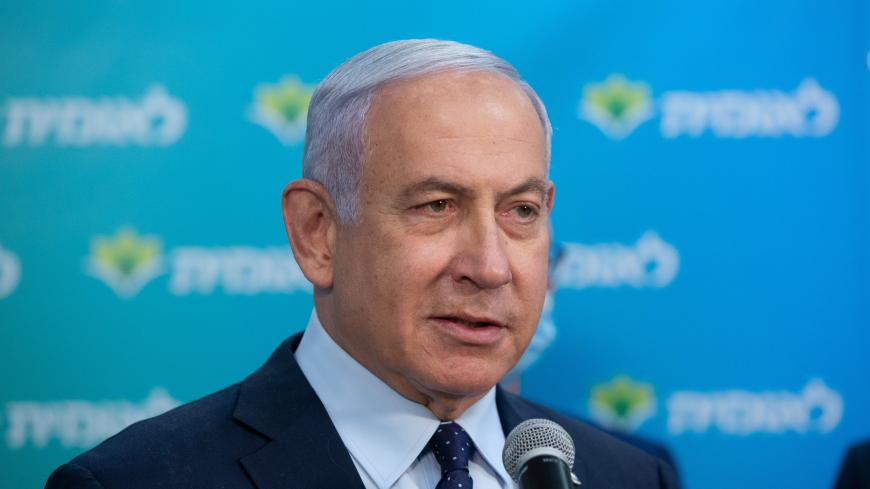 Israeli Prime Minister Netanyahu attends a ceremony marking the 4 millionth person to be vaccinated in Israel, at the Leumit Health Care Services vaccination facility in Jerusalem on Feb. 16, 2021.

“I will win, anyway,” Prime Minister Benjamin Netanyahu said repeatedly in conveying the key message he brought to the studio of Israel’s most watched television news show Feb. 15.

Greeting her viewers at the start of the show, Channel 12 news anchor Yonit Levi announced that Netanyahu was on his way to the studio for an extensive interview. The interview was a surprise. Not only because it had not been announced in advance, but also because its message deviated from Netanyahu’s usual preelection tactics of crying wolf, warning voters that the Likud is about to lose in order to get them out to vote.

Netanyahu’s choice of platform was also surprising given his boycott of Israel’s mainstream television channels that he accuses of bias and of attempts to unseat him. In recent years he has adopted several sympathetic, right-wing radio and television stations such as Channel 20, where he gives interviews to his heart’s content in accordance with the terms he sets. Netanyahu conducts most of his contact with the public on social media: Twitter, Facebook and even TikTok, where his easy presence provides him with an advantage over most other politicians.

Since he rarely troubles himself to appear on major commercial channels, his entry into the Channel 12 studio created a sense of anticipation, with viewers expecting him to wrestle with Levi in order to present himself as the victim of a hostile media. But the minute he removed his black face mask, revealing a broad smile and a relaxed and convivial attitude, it was clear that Netanyahu had adopted a different strategy.

For over 30 minutes — a lifetime in terms of a primetime news show — Netanyahu was clearly in his element. Levi, a veteran and sharp interviewer, displayed a tight grasp of politics and current affairs, but she had clearly prepared for a different kind of encounter, the kind of clashes in which Netanyahu used to engage in the past.

Like everyone else, Levi expected an aggressive, angry, accusatory interviewee. What she got was a constantly smiling guest, amused and cynical at times, who turned on the charm and rarely took the smile off his face. He used her first name, Yonit, often, to create a sense of intimacy, easily deflecting the criticism and tough questions she leveled at him.

Netanyahu even managed to get a laugh out of Levi after she continued to pound him with claims about the government’s failed handling of the coronavirus crisis and his stinginess with the truth. Rather than answering her, Netanyahu launched into a tirade. “Stop looking (for faults) all the time. … What’s important is that we are leading the world in terms of vaccinations. We are emerging first from the corona. I am going to focus on that and on catapulting the Israeli economy, just as I did with the vaccinations. That’s what I am doing this year. So, na, na, na,” the prime minister said, mimicking the rendition of Levi’s persona on a popular satirical television show in order to portray her as a nitpicker. “Look at the big picture. The citizens of Israel know it, and so do you, Yonit.”

It was a fascinating moment of television.

His “na, na, na” imitation was not off the cuff. It was planned in advance in order to throw Levi off balance and dismiss the criticism against him by making slight fun of her in a supposedly spontaneous way. Levi may be sorry she laughed in response. She even complimented him for providing “quite a good imitation” of her, rather than putting him in his place and insisting he respond seriously to the points she raised — but it was too late. Netanyahu got what he wanted. Since the interview he keeps repeating his “na, na, na” witticism on Twitter, as do his supporters who have adopted it as a kind of anthem foretelling a certain victory March 23.

As reflected on social media, even those who despise him conceded he gave a good interview, faulting the interviewer for being too soft and failing to take him to task for his levity on issues of life and death.

Netanyahu has given thousands of interviews throughout his career but few left an imprint on history. The ones that people remember are due mostly to the gimmicks he used — such as the gas mask he wore during a 1991 CNN interview as deputy foreign minister to underline Saddam Hussein’s evil intentions. This week’s interview will likely also be remembered in years to come, not only as a news event nor for the headlines it produced, although there were a few.

The significance of his appearance lies in projecting the way he perceives his prospects five weeks before these very critical elections, as he battles to eradicate the coronavirus, prove his innocence in court and weaken the growing number of challengers from within his own right-wing camp.

Netanyahu is clearly troubled by his stagnation in the polls. While his Likud party continues to poll at 30 Knesset seats, ensuring its continued hold as the largest party in the legislature, that number will not suffice for him to form a coalition government and retain his position.

Internal polls that Netanyahu has commissioned indicate that his base is solid. His voters have not abandoned him despite the tribulations of the COVID-19 epidemic and his criminal indictments. The political maintenance work he has carried out in recent years has earned their loyalty and broad identification with him. At the same time, he has put off more moderate voters who, while adhering to right-wing ideology, are disgusted by Netanyahu's collaboration with the head of the ultra-radical Otzma Yehudit [Jewish Power] party, Itamar Ben-Gvir, with whom Netanyahu has forged an alliance designed to garner the votes of Ben-Gvir's supporters.

These more moderate voters are the ones he must now win over to ensure victory. That is why he chose to appear on Channel 12 and not at his Channel 20 fan club. That is why he sought to convey messages of unity, to make light of his animosity toward the media and to avoid lashing out at the left, law enforcement and the judiciary.

This was a new Netanyahu: Almost fatherlike, an experienced statesman, self-confident, smiling. Not only did he conceal his familiar warning about the rule of the right being under threat, Netanyahu declared his victory in advance when he stated repeatedly that he was going to win, come what may. That was the headline of the interview, and it reflects the exact opposite. His victory is nowhere near assured, only the strategy has changed, for now.