The Palestinian Authority reported several incidents throughout the territory. It follows other violent clashes in recent weeks between the Israeli military and Palestinians. 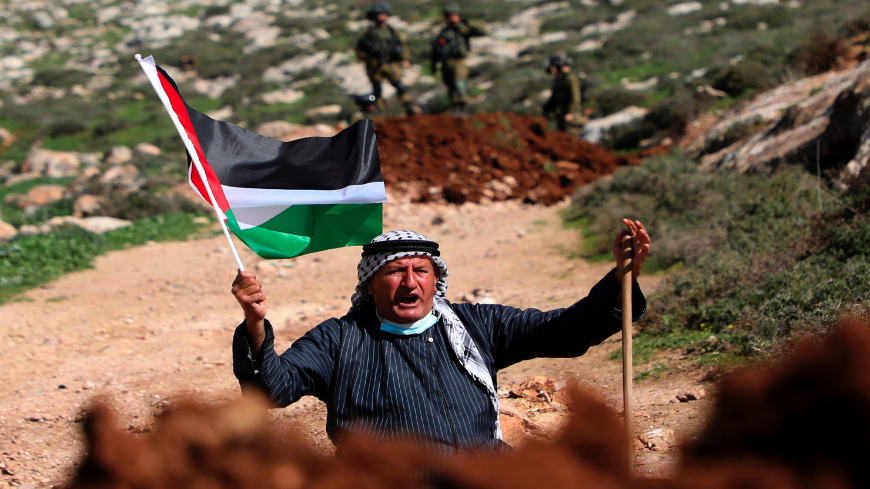 A Palestinian protester shouts slogans and waves a national flag during a demonstration against the expansion of settlements near the village of Beit Dajan, east of Nablus, in the occupied West Bank, on February 12, 2021. - JAAFAR ASHTIYEH/AFP via Getty Images

The Palestinian Authority (PA) reported several clashes on Friday at anti-settlement protests throughout the West Bank.

Two Palestinians were injured by Israeli security forces gunfire in Beit Dajan east of Nablus. The forces responded to a protest against Israeli settlements, the PA-run WAFA News Agency reported.

The Israeli military also dispersed a protest against settlement construction in Dayr Jarir northeast of the Palestinian capital, Ramallah. Palestinians and Israeli settlers also clashed at a similar protest in Biddya near the Israeli border, according to WAFA.

The Israel Defense Forces (IDF) did not report any of the incidents. WAFA usually portrays Israelis as the aggressors in such instances, while the IDF reports them as Israelis responding to attacks.

The United Nations and much of the international community recognize the West Bank as Palestinian territory occupied by Israel. The PA controls parts of the area while the Israeli military controls others, including its border points. There are thousands of Israeli settlements throughout the territory. Israel gained the West Bank from Jordan during the 1967 war. The West Bank has a majority Palestinian population.

A few security incidents in the West Bank in recent weeks were reported by both Israeli and Palestinian officials. In late January, the IDF shot dead a Palestinian man they said attempted to stab soldiers. In November, the IDF said they fired at and killed a Palestinian man who shot at them. The PA disputed the IDF’s account for both events.