Almost two years since its territorial defeat, the terror group still has access to $100 million in cash reserves, according to the US government. 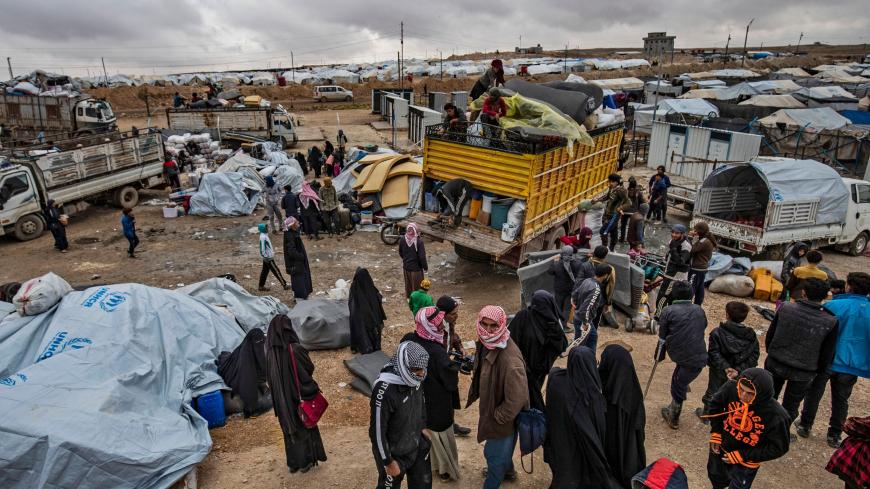 Syrians load their belongings onto trucks as they prepare to leave the Kurdish-run al-Hol camp holding relatives of alleged Islamic State group fighters in Hasakah province in northeastern Syria, on Nov. 16, 2020. The US Treasury Department reports that the Islamic State has actually moved money through the camp through money services businesses called hawalas. - DELIL SOULEIMAN/AFP via Getty Images)

The Islamic State terror group was largely crushed by coordinated international effort in 2019, but its networks appear to still have access to an estimated $100 million in cash reserves stashed across the Middle East, the US Treasury Department said.

IS’ monetary reserves are at a historic low since it took over swaths of Iraq and Syria in 2014, having since lost all of its tax- and oil-producing territory.

But the group’s remnants in Syria continue to receive streams of cash from associates based in neighboring Turkey and from smugglers in Iraq, according to an unclassified Treasury Department memo released earlier this month.

Some of those transfers have gone via local hawalas (money services businesses) in the notorious al-Hol internment camp, which houses some 50,000 family members of IS fighters. Other cash shipments have been delivered by courier across the flat, open desert border between Iraq and Syria.

Inside Syria, the group continues to raise funds “through extortion of oil smuggling networks in eastern Syria, kidnaping for ransom targeting civilian businesses and populations, looting and possibly the operation of front companies,” the memo from the Treasury’s chief auditor read.

The document provides a limited window into a forgotten front in the US-led war against the jihadi proto-state, a conflict that has largely dropped from the headlines. But networks of IS militants are still out there, and as last week’s twin suicide bombings in Baghdad underscore, they remain deadly.

As the new administration of President Joe Biden looks to recalibrate Washington’s approach to the Middle East after four years of Donald Trump, officials may want to look into ways to cut off the terror group’s enablers, said David Asher, a senior fellow at the Hudson Institute who led the State Department's economic warfare strategy against IS in 2014-15.

“Turkey’s tolerance for Islamic State financing was unusually high,” Asher told Al-Monitor, adding, "I don't believe that there has been sufficient effort ever mounted inside Turkey to cut the Islamic State's finance and banking logistics networks off.”

In the early days of the self-proclaimed caliphate, IS members interrogated by US investigators claimed they used the Turkish side of the Syrian border “as their ATM,” Asher recalled. Al-Monitor has reached out to Turkey's Interior Ministry for comment.

"There have been periodic joint efforts, but it hasn't been consistent. It would be great if the Biden administration could get more cooperation on that,” he said.

Perhaps the US official most critical of the Turkish government’s stance (or lack thereof) toward IS, Brett McGurk, returned this month to the White House as the National Security Council’s coordinator for the Middle East and North Africa.

McGurk, who served as US envoy to the coalition to defeat IS under both former Presidents Barack Obama and Trump, resigned in protest when Trump suddenly ordered all US forces to withdraw from Syria in December 2018.

That decision was later reversed, but Trump ordered the United States out of Syria again 10 months later, leading US special forces to hand over key territory to the Assad regime and Russia. The pullback reduced the US government’s visibility on IS’ financial activities, the Treasury Department reported last year.

The self-proclaimed caliphate still has an estimated 10,000 loyalist fighters in Iraq and Syria, according to a United Nations report released in August.

The United States has also assisted Iraq in building up its sparse security along its 400-mile border with Syria, across which fighters, guns, drugs, cigarettes and cash have flown for decades.

Meanwhile the hunt for IS’ remaining figures is likely to continue under the Biden administration. Earlier this week, US and Iraqi forces tracked down and killed the jihadi group’s top commander in Iraq, Abu Yaser al-Issawi, after rounding up or killing 17 of his associates in recent months.

Nine other suspected IS figures were also killed in the operation, said a spokesperson for Iraq’s commander in chief, Prime Minister Mustafa al-Kadhimi.