US envoy previews Biden's Israeli-Palestinian policy at the United Nations

Washington plans to reestablish diplomatic missions with the Palestinian Authority and defend Israel from "bias" at the UN. 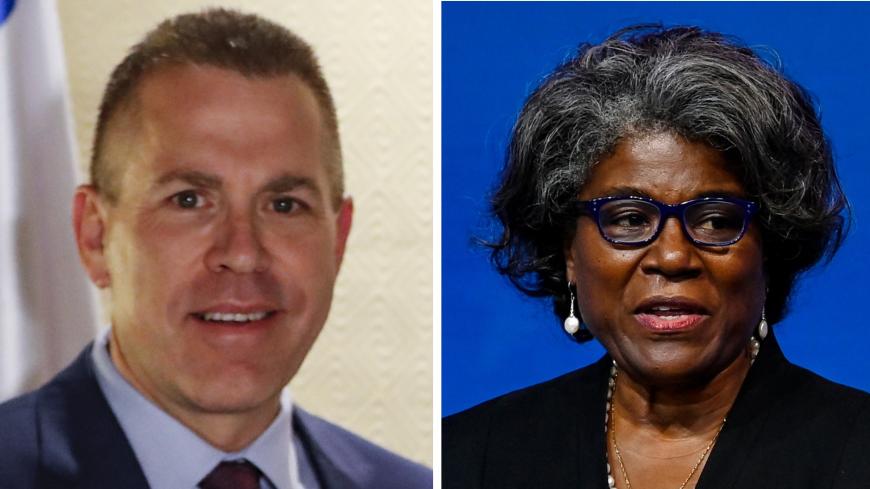 How will the Israeli envoy to the UN, Gilad Erdan, work together with Linda Thomas-Greenfield, the US envoy-designate to the UN? Erdan (L), who also is Israel's ambassador to Washington, is seen at a hotel in Jerusalem on Dec. 11, 2018, while Thomas-Greenfield speaks during an event announcing her nomination in Wilmington, Delaware, on Nov. 24, 2020. - AHMAD GHARABLI/AFP via Getty Images / CHANDAN KHANNA/AFP via Getty Images

President Joe Biden’s administration said Tuesday that it would work to restore diplomatic ties with Palestinian leaders while pushing for an eventual two-state solution, all the while continuing to urge Middle Eastern countries to establish formal relations with Israel.

The new US administration will “support a mutually agreed two-state solution in which Israel lives in peace and security alongside a viable Palestinian state,” acting US envoy to the United Nations Richard Mills said during a debate held by the Security Council on Tuesday.

Mills also said the United States would work to reopen diplomatic missions to restore “relations with the Palestinian leadership and the Palestinian people,” which he said had “atrophied over the last four years.”

“US assistance benefits millions of ordinary Palestinians and helps to preserve a stable environment that benefits both Palestinians and Israelis,” Mills said. He added that the administration intends to focus on humanitarian issues such as the situation in Gaza, which remains under Israeli blockade, and will seek to foster an environment to enable future peace talks between the two sides to resolve the more than seven-decade conflict.

Mills' statement is the first public articulation of the new administration’s approach to the Israeli-Palestinian conflict since Biden took office last week.

The plan would largely reverse the Trump administration’s heavily pro-Israel approach to the conflict while continuing to build on strategic opportunities that have opened up for Washington via the Abraham Accords. The Trump administration closed the Palestine Liberation Organization's office in Washington and cut nearly all humanitarian aid to the Palestinians before restoring a fraction of it last year.

The UN envoy's conciliatory overture included a commitment of firm US support for Israel, saying the US administration would resist any “biased” UN resolutions that single out the Jewish state.

US administrations have repeatedly shielded Israel from UN Security Council resolutions condemning Israeli conduct regarding the Palestinians. In 2016, the administration of President Barack Obama made headlines during its last full month in office by abstaining from voting on a resolution introduced by Egypt to demand an end to Israel's settlement-building.

Netanyahu's government responded by slamming the Obama administration, under which Biden served as vice president. Though Biden has historically opposed the expansion of Israeli settlements on Palestinian land, he and some other officials were reportedly wary leading up to the abstention, citing concerns of backlash in Congress and from Israeli leaders.

How the Biden administration plans to approach negotiations to achieve a two-state solution remains unclear. More than 460,000 Israeli settlers are estimated to live in the West Bank in what most of the international community says is a violation of international law. The territory, which was supposed to become the heart of an independent Palestinian state according to the 1993 Oslo Accord, remains under indefinite Israeli military occupation.

Earlier this month, one of Israel's leading human rights groups, B'Tselem, declared the country an "apartheid" state due in part to how its differing rules apply to the more than 4 million Palestinians living under Israeli military occupation.

Netanyahu’s government signed off on plans for some 800 new settlement housing units in the West Bank earlier this month in what some saw as a slight to Biden.

The United States has so far not reacted to the settlement authorizations, though the United Kingdom and European Union expressed "concern" and called on Israel to halt all illegal settlement activity in the occupied territory.

Israeli Prime Minister Netanyahu’s government has been bracing for the new Biden administration after enjoying near carte-blanche approval for its policies from the Trump White House over the last four years.

Israel's new ambassador to Washington, Gilad Erdan, is also Israel's envoy to the United Nations. His dual role comes at a time of increased skepticism about Israeli policies among many Democrats; at the same time, Biden has a long record of support for Israel.

Biden’s pick for UN ambassador, veteran diplomat Linda Thomas-Greenfield, will appear before the Senate for a confirmation hearing Wednesday. The Biden White House has not yet appointed an ambassador to Israel, a key role that will likely serve as a bellwether for policy.